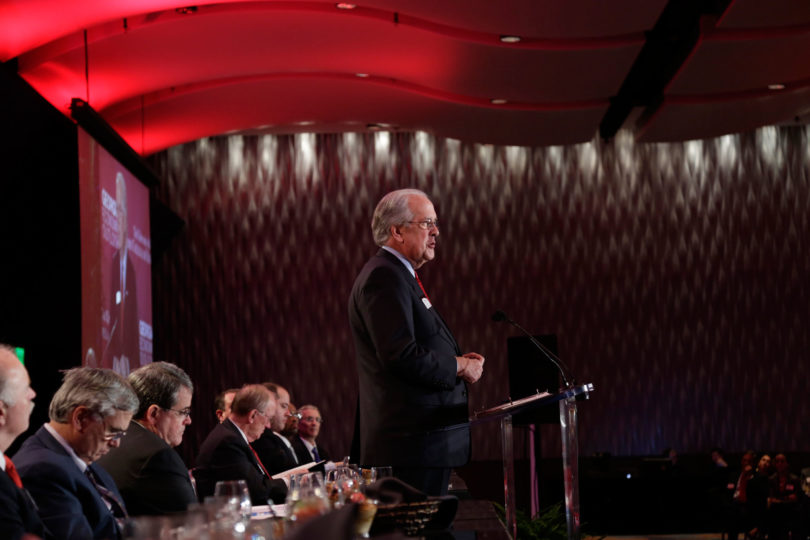 Athens, Ga. – Buoyed by rising home prices, smart economic policies and new jobs, Georgia’s economy will rise more than the national average next year. That was the message delivered by Charles B. Knapp, interim dean of the Terry College of Business and president emeritus of the University of Georgia, at the Georgia Economic Outlook luncheon held Dec. 11 in Atlanta.

“Private sector job growth will be well balanced in 2014, which reduces the risk of recession because Georgia’s growth will not be dependent on the performance of just one or two big economic sectors,” Knapp said. “The fastest job growth will occur in construction, followed by professional and business services, and mining and logging.”

The Economic Outlook series travels to 12 cities throughout the region, providing a complete picture of what the coming year brings for the local, state and national economies. Sponsored by the University of Georgia Terry College of Business, the series relies on the sound reasoning of the Selig Center for Economic Growth. Its goal is to explain Georgia’s model for growth, trends shaping the nation’s economic focus and what different cities across the state can expect in the months ahead.

According to the forecast, prepared by the Selig Center for Economic Growth, the state’s inflation-adjusted GDP will grow at 3 percent next year, with an influx of 1.8 percent more jobs. In contrast, the nation’s GDP will see a 2.3 percent growth rate overall with 1.5 percent increase in the jobs.

Last year, the state’s growth was more modest, with the economy growing by about 2 percent. The changes, due in large part to development policies like the Georgia legislature’s deal closing fund, are set to help Georgia make up its jobs lost in the Great Recession by mid-2015.

“One factor behind the broadening base of job growth is the upturn in manufacturing activity, which is noteworthy given that since the turn of the millennium, Georgia has lost four out of every 10 manufacturing jobs,” Knapp said. “In 2012 and 2013, we’ve seen major project announcements in aircraft, automobile, construction equipment, life sciences and flooring manufacturing.”

In addition, at 1.3 percent, Georgia’s population growth will outperform the national average of 0.9 percent. The influx is due, in part, to heavier migration to Georgia. In the next year, about 61,000 people will move into the state, up from 29,000 in 2009.

It isn’t all good news, however.

While Georgia’s private sector will be growing in 2014, the public sector will drag. Because federal spending makes up a higher-than-average portion of Georgia’s GDP at 6.9 percent, cuts there will hurt. Reductions to defense spending will be especially harmful, as many Georgia communities rely on military bases for their economic lifeblood.

In addition, Georgia still lags the nation in K-12 education, with eighth graders ranking 40th among states in math, 34th in reading, 31st in science and 27th in writing.

“To fully leverage Georgia’s newly restructured private-sector economy we need to adjust our priorities to put much greater emphasis on educational achievement,” Knapp said. ” That will be critical in terms of improving Georgia’s competitiveness, which ultimately determines our standard of living.”

The National Forecast
While Georgia will outpace the U.S. economy in 2014, the nation will also see improvement, with a 2.3 percent growth of GDP (up from 1.6 percent last year).

The primary driver of GDP growth will be private domestic demand, rather than the fiscal stimulus or net exports. Indeed, sustained growth nationwide relies on a few factors, including increased spending on both new and existing homes, thawing credit markets, higher wages and businesses’ spending on new equipment and technology.

In addition, crude oil and gas prices are expected to remain at 2013 levels through the new year, and limited inflation should reassure the bond markets and the Federal Reserve.

While uncertainty will decline throughout the year, the risk of enduring another recession (30 percent chance) continues to hinge upon federal fiscal policy, oil price shocks and financial panic from the European Union.

Georgia Quick Facts
• State GDP will grow at 3 percent
• Nominal persona income will grow by 5 percent
• In-migration will rebound and the birth rate will increase
• Georgia will gain 4,100 manufacturing jobs
• Single-family home starts will rise by 36 percent
• Job growth will remain at 1.8 percent
• The Atlanta metro area will add 57,800 jobs (up 2.4 percent)
• Unemployment will average 8 percent, 0.5 percent lower than 2013
• The risk of recession is 30 percent (down from last year’s 40 percent)
• Job losses will continue in the public sector