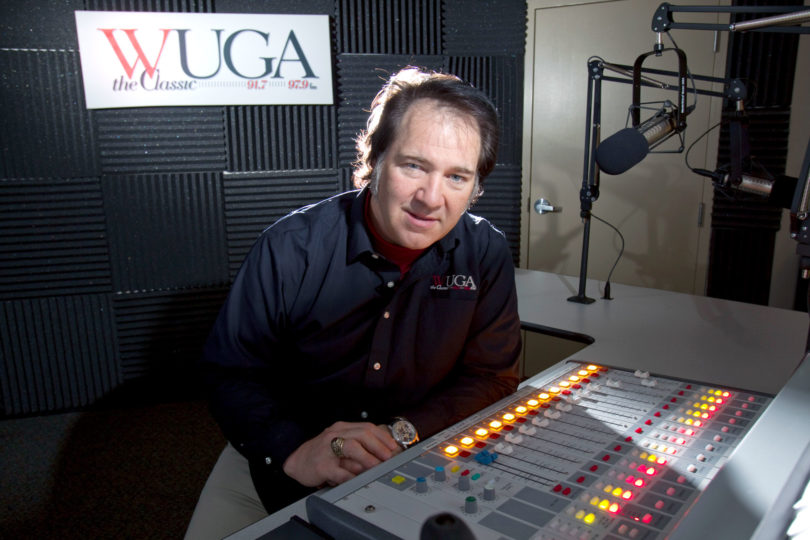 Daily listeners of “Morning Edition” on WUGA-FM 91.7/97.9 FM are well accustomed to Chris Shupe’s smooth baritone voice delivering the local daily weather report and public service announcements each morning. However, the radio announcer’s part in many Athenians’ daily routine, both on-air and off, wasn’t originally what he had planned to be doing.

Three years ago Shupe and his wife were “surviving” the recession’s effect on their 10-year-old successful real estate business when he saw a job opening for a part-time position at WUGA-FM, the Georgia Public Broadcasting radio station operated at the university.

“I started part time as a weekend announcer, and then almost a year ago, coming up in June, I got offered a chance to come on full time,” said Shupe, now the assistant operations manager for the station. “I don’t even know that my eyes would have been open to looking at this as a full-time thing had the economy not taken a turn for the worse, and real estate been one of the areas to take a hit.”

While his wife, Kim, still works in Athens-area real estate, Shupe now spends his mornings on air from 5:30-9 a.m. on WUGA-FM, something he never imagined he’d be doing.

“What’s kind of silly is I’ve always been told I have a radio voice and just never really chased it,” he said.

As assistant operations manager, Shupe is responsible for helping with the day-to-day operations of the station. He also is in charge of writing and recording public service announcements and on-air promotional clips for radio shows airing on WUGA-FM.

“I also do anything else involving the operations of that station that need to be done,” Shupe said.

When he first got a job at WUGA-FM, Shupe had little experience with public radio.

“When I first started-I’ve got to be honest-I wasn’t really that much of a listener of public radio. So I was shocked to hear how many people whom I knew and were friends were already listeners long before I ever joined the ranks,” he said. “I used to joke with people who listen saying, ‘Oh you’re one of my two listeners or two fans,’ but now I realize it’s a really big portion of the area that listens to our station, and I’m really proud of that.”

In between work and family, Shupe still finds time for a hobby he’s had since his teenage years.

“I’m an Elvis impersonator, and I have been since I was a youngster,” Shupe said, adding his love for the King started after his grandmother bought one of Elvis’ albums for him to listen to.

“I immediately took to his style more than anything,” Shupe said. “I just liked his sound, and I mimicked his voice and then as soon as I could see him on anything I started mimicking his actions and the whole persona.”

Shupe performed his impersonation professionally when he was younger, even sharing the stage with country artist John Berry and the group Normaltown Flyers. Shupe continues to put on a show around Athens every two months or so with a live band.

Having used his love for entertainment on the stage for years, Shupe said his position at WUGA-FM now gives him a chance to use his natural talents on air to reach a larger audience.

“Being a guy who’s always been in entertainment, it has been a dream to get paid in a career for doing something connected with entertainment,” he said. “It has just been a blessing and has turned out to be something that I probably should have done a long time ago.”