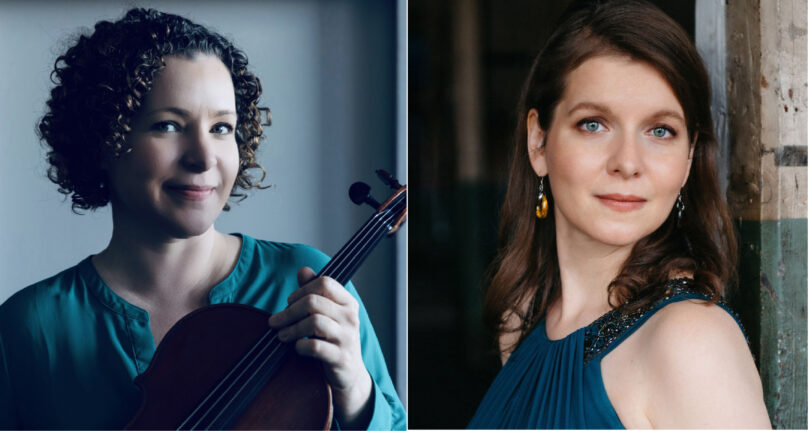 Maggie Snyder, professor of viola, and Liza Stepanova, associate professor of piano, present a special program in celebration of Women’s History Month on March 15 at 7:30 p.m. in Ramsey Hall.

“This exciting and eclectic program spans three centuries of music written by women, works for viola solo and viola with piano as well as piano solo, piano with electronics and even a work for toy piano,” said Stepanova.

A highlight of the program is the world premiere of “Soliloquio Serrano No. 2 for solo viola” for viola solo by the Grammy-winning composer Gabriela Lena Frank, hailed by The Washington Post as one of 35 most significant women composers in history. This work was commissioned by and written for Snyder.

Other featured composers include early pioneers Anna Bon and Rebecca Clarke as well as award-winning contemporary composers Kirsten Volness and Missy Mazzolli, who is making history as one of the first female composers to be commissioned by The Metropolitan Opera. The program also includes a war piece by Armenian-American Mary Koyoumdjian, a toy piano piece by Belize-born British composer Errollyn Wallen and a celebration of water by Japanese-born, now West Coast-based composer Karen Tanaka.

Stepanova has been praised by The New York Times for her “thoughtful musicality” and “fleet-fingered panache.” In the fall of 2020, she was named Musical America Worldwide’s “New Artist of the Month,” a distinction celebrating her work and the impact of her recent CD “E Pluribus Unum.”

Snyder has performed solo recitals, chamber music, concertos and as an orchestral musician throughout the United States and abroad.  She has performed at the Kennedy Center, Carnegie Hall and the Seoul Arts Center, in addition to Mexico, Greece, Korea and Russia. She has performed under the batons of James Levine, Yuri Temirkanov, David Zinman, Robert Spano, Leonard Slatkin, James dePriest, Julius Rudel, James Conlon and Michael Tilson Thomas and at such festivals as the Brevard Music Festival, the Sewanee Summer Music Festival and the Aspen Music Festival, where she was a Time Warner Fellow.

This concert is part of the Hugh Hodgson School of Music Belong Series, which began as part of the diversity, equity, inclusion and belonging initiatives set forth by the DEIB committee. The Belong Series highlights programs that celebrate the school’s commitment to a greater emphasis on the study and performance of works by underrepresented composers, as well as non-classical pieces and their traditions and origins, including world music, jazz, folk, popular and commercial styles, as well as emphasizing works that re-imagine the traditional concert experience and encouragement and promotion of concerts that program inclusive repertoire.

Tickets for the concert are $12 for non-students and $3 for UGA students. They can be purchased through the Performing Arts Center Box Office online, in-person or by calling 706-542-4400. Sales from tickets directly support student scholarships.