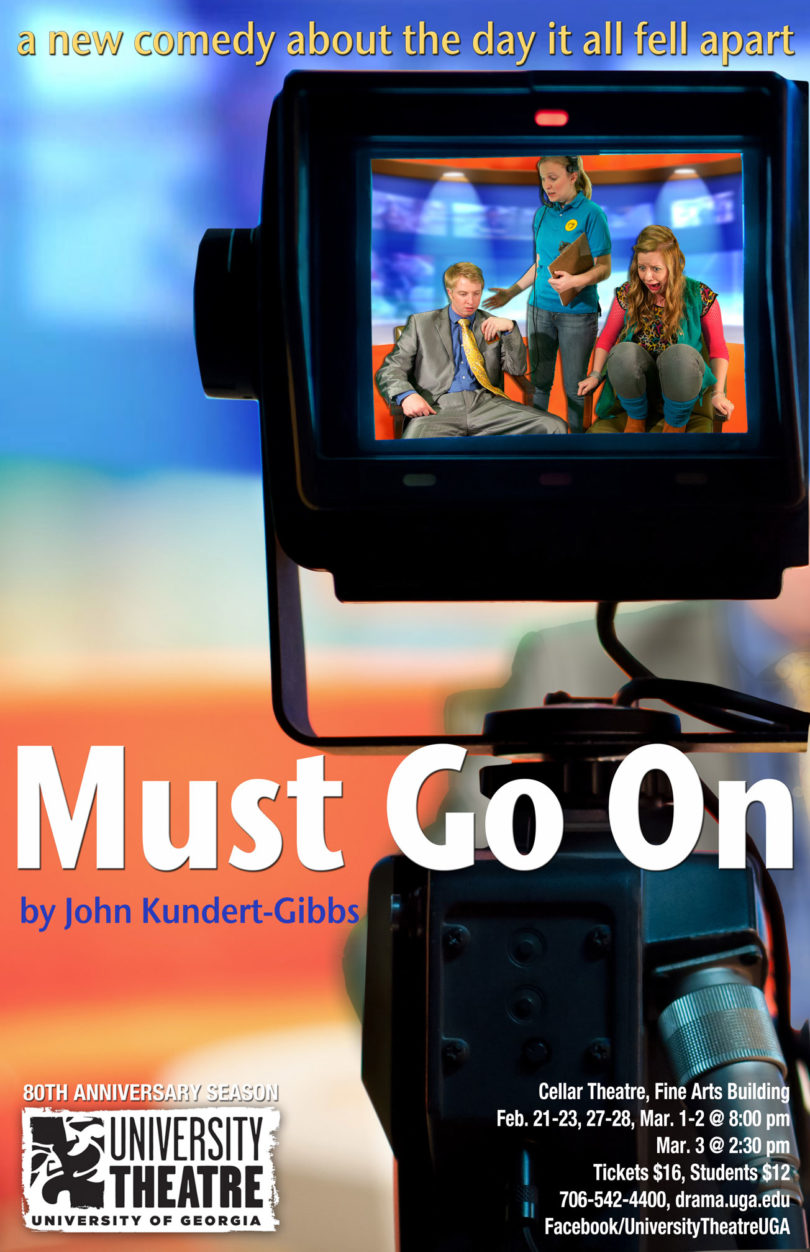 Athens, Ga. – As part of its commitment to producing original work, the University of Georgia Theatre will present the world premiere of “Must Go On,” a comedy written and directed by John Kundert-Gibbs, an associate professor in the department of theatre and film studies. The homage to morning talk shows will feature a combination of onstage theatre and live television broadcast Feb. 21-23 and Feb. 27 to March 2 at 8 p.m. in the Fine Arts Building’s Cellar Theatre, with a matinee performance March 3 at 2:30 p.m.

The comedy takes place on the day that everyone learns “Taste of the Morning,” a fictional Atlanta-based live talk show, has been cancelled. While the cast and crew try to keep up the illusion of calm on screen, things backstage start going wrong. As the various guests on the show—including a high school dance troupe and a possum trainer—get drawn in, chaos threatens to overwhelm the action in front of the cameras as well.

“The production is to some extent a requiem to local morning television, given the rising cost of local television,” Kundert-Gibbs said. “‘Taste of the Morning’ is a composite of a number of local morning news and gossip programs around the country, with a flair—and a desperation—all its own.”

Kundert-Gibbs will stage “Must Go On” in two spaces separated by approximately 50 feet and connected with audio and video links.

“The show’s ‘on-air’ and studio action unfolds for the audience by way of a constant large monitor feed,” he explained, “while the theatre’s stage serves as the ‘Taste of the Morning’ greenroom. Via video hookup, the audience will see both the back stage madness as well as what’s being broadcast on TV, revealing the often chaotic, often humorous antics that go into producing a daily television show.”

Tickets for “Must Go On” are $16 for the general public and $12 for students. They can be purchased at http://www.drama.uga.edu/box-office, by phone at 706/542-4400, in person at the Performing Arts Center box office or at the door before the show.

For more information on the UGA Department of Theatre and Film Studies, see www.drama.uga.edu.