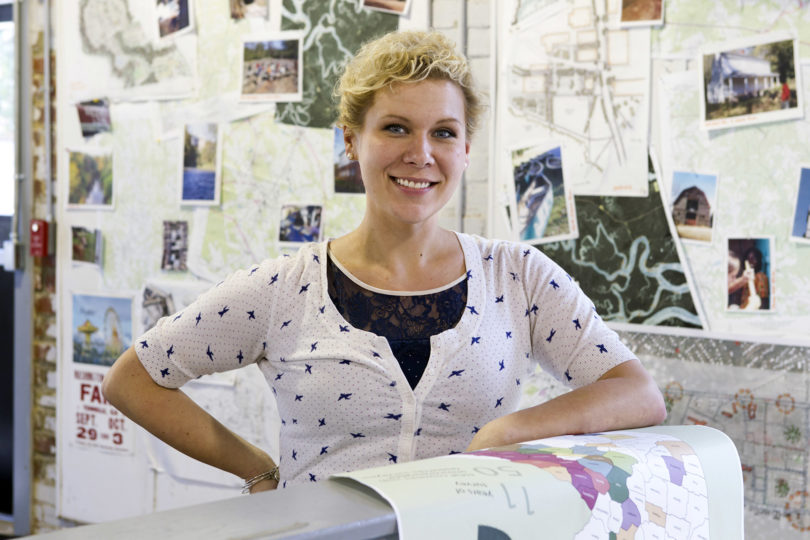 As Laura Kviklys was digging through the diaries and letters of Colonial Quaker women from Philadelphia for her undergraduate thesis, she wanted a different way to view her historical heroines.

“I thought ‘This is all great, but it would make so much more sense if I could see what these women were talking about,’ ” Kviklys said. “I wanted to be able to go into their houses so I could get a better sense of their lives and how they lived.”

As program coordinator for FindIT!, a statewide cultural resource survey program, Kviklys helps future thesis writers by surveying Georgia counties and documenting noteworthy structures. FindIT! is headquartered at the Center for Community Design and Preservation in the College of Environment and Design.

The Georgia Transmission Corp. in partnership with the Georgia Department of Natural Resources’ Historic Preservation Division sponsors the program, which has completed more than 10 years of surveying. GTC uses FindIT! to provide surveys of resources in areas where power lines potentially may be placed while the state uses the program to round out its surveying efforts.

College of Environment and Design graduate students from FindIT! travel to Georgia counties to document and photograph buildings, landscape features, objects of cultural significance and sites such as cemeteries.

“You can tell so much about a community by its architecture and what they keep and preserve,” Kviklys said. “Piece by piece it just paints this great picture of Georgia.”

Kviklys started working at FindIT! after earning a graduate degree in historic preservation and conservation from UGA. The Roswell native became program coordinator after her predecessor retired. She is responsible for training student surveyors, checking all surveys for accuracy and for updating Georgia’s Natural, Archaeological and Historical GIS inventory. She also acts as a liaison between the state, GTC and UGA.

Kviklys frequently travels throughout the state to talk to community groups that are interested in doing historic surveys. She even does some field work and surveying herself.

“Every time I go out, I fall in love with the state of Georgia more,” she said.

In late March, FindIT! officially had documented more than 13,500 resources in Georgia. Kviklys said her goal is to survey every county in Georgia while growing FindIT!’s profile.

“I want this to be the quintessential survey program that other states look to as an example for how to do things,” she said. “The fact that we are partnered with a state agency in conjunction with the state historic preservation office while also training the next generation of preservationists is awesome.”

In between surveys and workdays, Kviklys fills her life with music, baking and gardening. Though she is a self-proclaimed plant killer, she thoroughly enjoys being outside in her vegetable garden.

Also outside of work, Kviklys attends Atlanta Braves games. Her office even has a calendar marking the days of each game. A longtime Braves fan, Kviklys said she loves listening to Chip Carey and Jose Simpson call the games.

In between attending games this summer, Kviklys and FindIT! students will be surveying Washington, Twiggs and Crawford counties. Kviklys said that every time she goes out to survey, she learns something new.

“That’s what this is about-finding out why we’re where we are and helping us remember how we got here,” Kviklys said. “You don’t know how you got to where you are without knowing where you were.

“It’s all about just putting together the puzzle that is Georgia.”