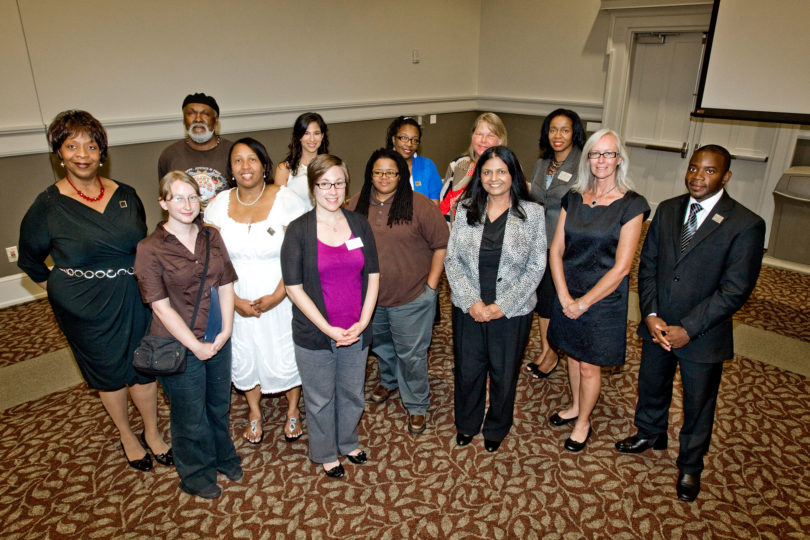 Eighteen faculty and staff members were recognized at the Office of Institutional Diversity’s Embracing Diversity program on Sept. 17. They are the first recipients of the university’s certificate aimed at encouraging employees to explore areas of diversity and learn how to keep UGA an inclusive community.

“The Diversity and Inclusion Certificate allows faculty and staff an opportunity to find out more about what diversity at UGA truly means,” said Michelle Garfield Cook, associate provost and chief diversity offer.

To earn the certificate, recipients took six courses in diversity-related subjects like disability access, the university’s Non-Discrimination and Anti-Harassment policy, LGBT awareness and communication among diverse groups. Certificate program graduates will act as diversity advocates in their workplace.

The certificate program is the result of a partnership between OID, human resource’s training and development unit and other university diversity-related offices and programs. Future courses will explore age as well as veteran and military issues.

Two scholarships also were awarded to three students based on their commitment to diversity, academic excellence and service. LeJoi Lane, a freshman, pre–journalism major, received the Black Alumni Scholarship from the UGA Alumni Association. The Athletic Association presented scholarships to Lawrence Williams, a math and music major, and Shaunteri Skinner, a political science major.

The push to continue making the university a more inclusive place came from keynote speaker Anneliese A. Singh, an associate professor in the College of Education’s department of counseling and human development services. She asked the audience to dedicate five minutes every day toward advocating for social justice.

A self-described “freedom fighter, social justice advocate and a believer in change,” Singh is past president of the Association for Lesbian, Gay, Bisexual, and Transgender Issues in Counseling and cofounder of the Georgia Safe Schools Coalition.

During her speech, Singh shared the story of how her diverse background—the lesbian, Sikh daughter of an Indian-born father and Southern, white mother—informed her understanding of advocating for social
justice.

In encouraging others to promote social justice, Singh told the audience to be an ally for groups on the fringes of society and to work on issues about which they are passionate.

“Ask yourself what makes you come alive, because what the world needs is more people who are living in their passion and their power,” she said.

“Dr. King talked about building a beloved community. It means that all of our needs are met in a community,” she said. “Is that possible? I don’t even know, but it’s the only vision of social justice that I want to guide me.”