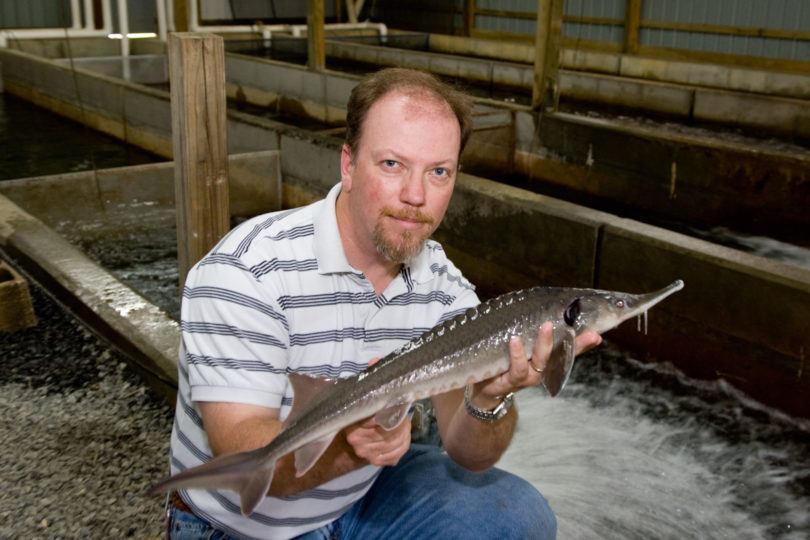 UGA associate professor Doug Peterson is sharing a $4.45 million, three-year grant from the National Oceanic and Atmospheric Administration to determine the status and movements of shortnose and Atlantic sturgeon in southeastern rivers. Both species of sturgeon are federally protected.

Peterson, who is a fisheries research biologist in the Warnell School of Forestry and Natural Resources, will receive nearly $1.4 million from the grant to focus on populations of both species inhabiting the Satilla, Altamaha, Ogeechee and Savannah rivers.

The central goal of the project, which also involves researchers with the South Carolina Department of Natural Resources, North Carolina Division of Marine Fisheries and the U.S. Geological Survey, will be to identify specific threats to each population in relation to seasonal movement patterns and habitat use within riverine and near costal habitats from North Carolina to Georgia. Shortnose sturgeon have been on the endangered species list since the 1960s, and Atlantic sturgeon are currently under petition for listing as either threatened or endangered.

“Previous studies of sturgeon in Georgia rivers have shown that the ecology and population dynamics of Southern sturgeon are dramatically different from those found in northern rivers, yet most recovery plans fail to recognize these important differences,” Peterson said. “The results of this study will help fill key information gaps critical to recovering Southeastern populations.”

In addition to determining the status of the two species, researchers also hope to develop, validate and implement an alternative, genetic-based aging technique.

The technique will replace the ­current method of removing portions of the pectoral fin spines, a process that is more invasive for the fish and labor intensive for the researchers.

The research team also intends to capture and tag 20 to 30 adult shortnose and Atlantic sturgeon each year with acoustic transmitters. By monitoring their seasonal movements, the team hopes to identify critical habitats of each population while providing new insights into the inter-basin movements of the fish that ultimately affect gene flow and local adaptation.

Although both species of sturgeon return to their natal rivers for spawning, the researchers hypothesize that low but sustained rates of gene flow among populations help the species survive across a latitudinal gradient that extends from Canada to south Georgia.

Another benefit to tagging ­sturgeon, Peterson said, is that it will provide new information not only on marine movements of sturgeon, but also for any other tagged marine animals, such as manatees, turtles and sharks.

“Hopefully, with long-term monitoring, we will gain a better understanding of shortnose and Atlantic sturgeon habitat preferences and age structure in Southeastern river systems,” said Post, who is the principal investigator on this project in South Carolina.

Peterson is the principal investigator for Georgia.