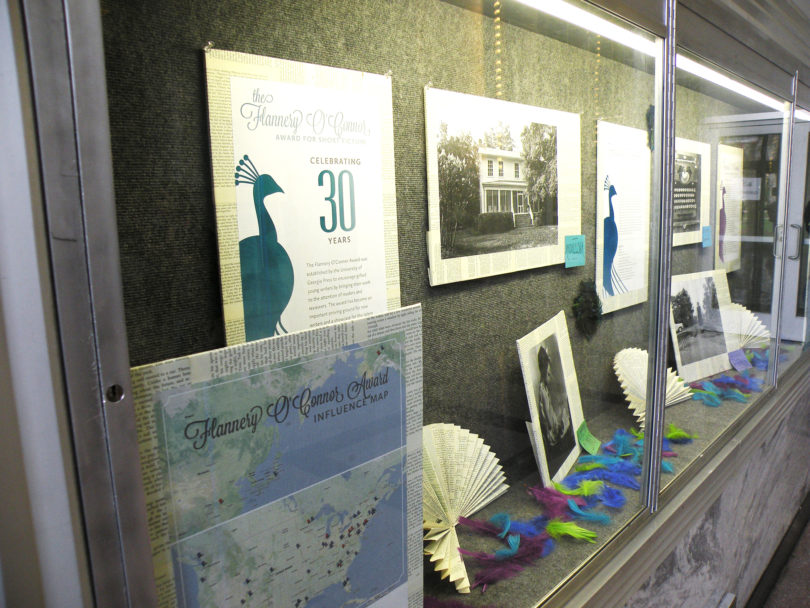 Display cases in the lobby of the UGA main library currently showcase some of the winning Flannery O'Connor Award collections and information about the anniversary.

Athens, Ga. – The University of Georgia Press is celebrating the 30th anniversary of The Flannery O’Connor Award for Short Fiction with events, receptions and the release of two e-book anthologies in March.

The Flannery O’Connor Award was established in 1983 to encourage young writers and bring their work to the attention of readers and reviewers. Award winners are selected through an annual competition that attracts as many as 450 manuscripts. The University of Georgia Press publishes the winning collections each year.

The award has become an important proving ground for new writers and has helped sustain interest in the short story form. Some of the most recognized names in short fiction today are Flannery O’Connor Award winners, including Mary Hood, Molly Giles, Antonya Nelson, Wendy Brenner, Ha Jin and Gina Ochsner.

The current series editor, Nancy Zafris, is the former fiction editor for the Kenyon Review and a Flannery O’Connor Award winner for her first collection, “The People I Know.”

This year’s competition will begin April 1. Electronic submissions will be accepted until May 31, and the winners will be announced this fall.

The press will be celebrating the 30th anniversary with events around the country, including the Georgia Literary Festival in November.

At the Association of Writers and Writing Programs conference, a panel will feature past winners E. J. Levy, Lori Ostlund, Bill Roorbach, Amina Gautier and Jessica Treadway. Zafris will moderate. Following the panel, a reception will jointly celebrate the award’s 30th anniversary and the 75th anniversary of the press. The conference will be held in Boston this March.

On campus, display cases in the lobby of the main library currently showcase some of the winning collections and information about the anniversary. The display will be available throughout February. The press will hold an open house April 18 at its offices on the third floor of the main library. All of the books that received the Flannery O’Connor Award for Short Fiction will be exhibited.

In March, the press blog will feature posts by past award winners and press interns, as well as other announcements and facts about the award, in “30 Days of the Flannery O’Connor Award.”

For more information on the Flannery O’Connor Award for Short Fiction, see http://www.ugapress.org/index.php/series/FOC.