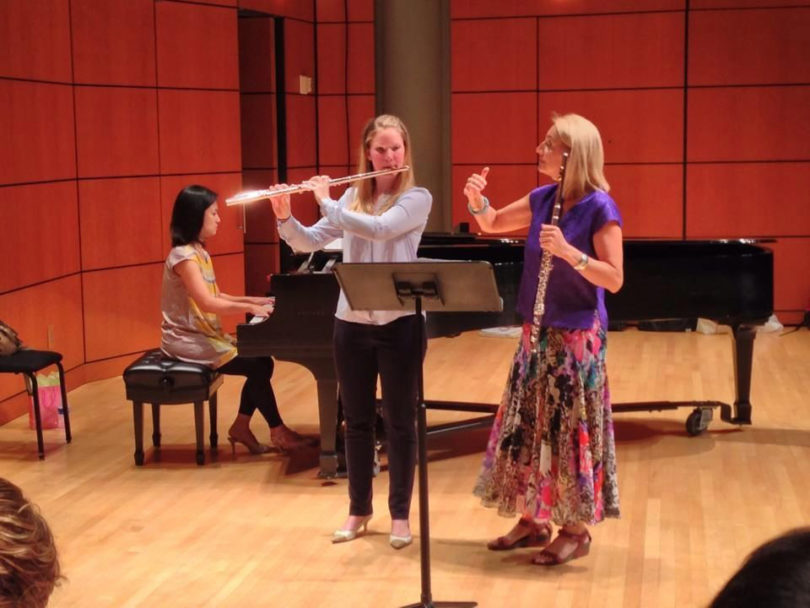 Talented young musicians from far and wide will converge on the UGA Hugh Hodgson School of Music June 20-24 when the school hosts Flutissimo, an advanced, intensive workshop for flutists.

Now in its third year of operation, Flutissimo is hosted and organized by Angela Jones-Reus, professor of flute at the School of Music, and UGA alumna Katherine Isbill Emeneth, who received bachelor’s and master’s degrees from the School of Music in 2007 and 2010, respectively.

“Flutissimo is designed to educate and inspire flutists through an exhilarating and cultivating curriculum that examines aspects of flute performance,” said Jones-Reus.

The workshop does this by allowing students access to some of the world’s most accomplished flutists in a variety of settings: from master classes taught on rotation by four faculty members to public performances and daily private lessons.

Despite its youth, the workshop already has hosted internationally recognized artists from the Juilliard School, the University of Texas, the Berlin Philharmonic and more.

This year, the workshop is hosting members of Flutistry Boston, a comprehensive organization offering sales, repair and artistic services centered around the flute.

“Flutistry Boston is in residence during the entire workshop, giving seminars and showcasing flutes and flute equipment for students to try and become familiar with,” said Jones-Reus.

Faculty and students of Flutissimo get to publicly showcase what they’re teaching and learning. Each of the performances is free and open to the public.