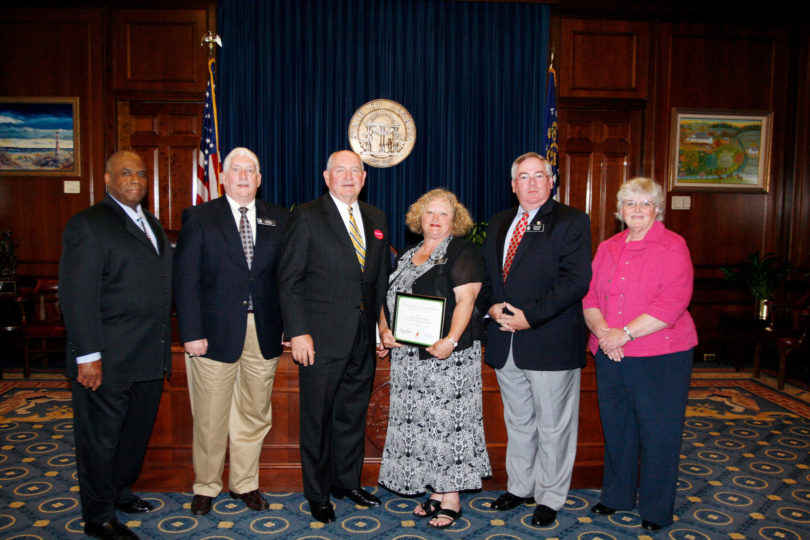 Jim Lientz and Tommy Hills, the state of Georgia’s chief operating officer and chief financial officer, respectively, and Joe Doyle, the director of the Governor’s Office of Customer Service, presented the commendation with University System of Georgia Chancellor Erroll B. Davis Jr. in attendance to support the team.

The meal plan team provides more than 80,000 meals per week for its plan participants and its excellence in customer service has earned numerous accolades. UGA food services recently ranked in the top 1 percent of college and university food service programs by a national benchmarking survey and 12th in the country for “best campus food” by the Princeton Review. Food services has received dozens of Loyal E. Horton Awards for its theme dinners and members of its culinary team have won several regional and national competitions.

“Our team has enjoyed record-breaking meal plan sales for 10 years in a row due to the team’s hard work every single day,” said J. Michael Floyd, executive director of food services. “We have participation rates at 125 percent of the number of beds on campus; that means that we are retaining an incredible number of students on the meal plan even after they move off campus.”

The Governor’s Commendation for Excellence in Customer Service recognizes actions and accomplishments that enhance the public image of customer service or improve the way customer service is provided in a way that directly benefits the citizens, customers or employees of the University System of Georgia.