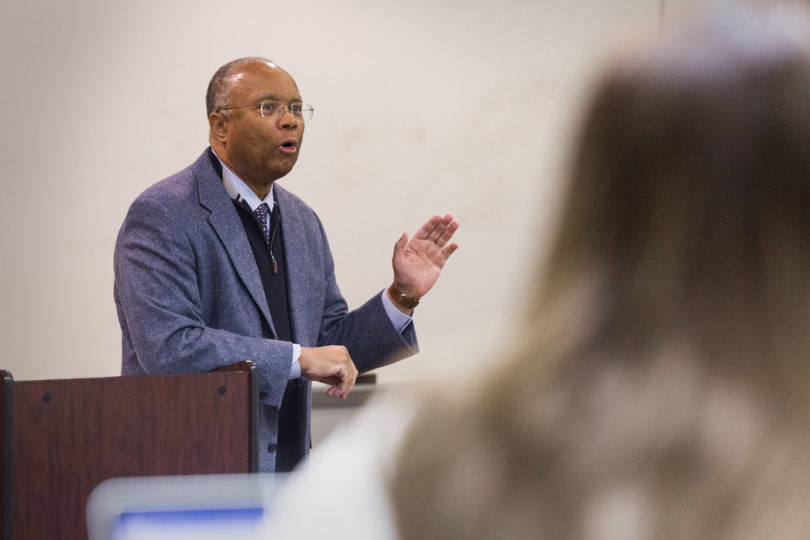 With a career that has spanned private practice, government, the corporate world and academia, the School of Law’s Larry D. Thompson has had the opportunity to enjoy various aspects of the legal field.

in Corporate and Business Law

“I get as much satisfaction and find as many challenges in this new chapter of my life and career as I did in the others,” Thompson said. “I feel very fortunate to be able to teach at the University of Georgia law school.”

Thompson, the Sibley Professor in Corporate and Business Law, instructs law students on white collar and business crimes as well as corporate responsibility.

He designed the class himself after working in the private sector as a general counsel to one of the biggest corporations in the world.

After working as a prosecutor and defense lawyer early in his career, Thompson moved into the corporate world in 2003. His previous work experience, which included serving as deputy attorney general of the U.S., independent counsel for the 2004 Department of Housing and Urban Development investigation and chair of the bipartisan Judicial Review Commission on Foreign Asset Control, made him an attractive candidate to corporations, which had been plagued by several high-profile scandals in the early part of the decade and wanted general counsel candidates with significant government experience.

Thompson entered the business world with PepsiCo and spent 10 years with the global leader in the food and beverage industry. While at PepsiCo, he held multiple positions, including that of general counsel as well as executive vice president, government affairs and corporate secretary. In these roles, he led the company’s worldwide legal function as well as its global government affairs and public policy group and its global citizenship and sustainability team.

The various aspects of serving as general counsel for PepsiCo, including handling legal needs, public policies and governmental affairs issues, gave Thompson a chance to continue learning throughout his career.

It was while working under CEO Indra Nooyi, who created the company’s “Performance with Purpose” philosophy (which strives to deliver sustainable financial success by operating in line with the needs of society), that Thompson was able to research and develop the strategy from the legal standpoint.

It was that work that helped him shape and design his corporate responsibility course at Georgia Law. Continuing to learn is something Thompson encourages his students to do as well. “View your journey in the law as a long-term commitment,” he said. “You should always protect and cherish your reputation as a lawyer and be forthright in your dealings with your colleagues, opposing counsel and your clients.”

In 2001, Thompson first entered the teaching academy, taking a permitted sabbatical from his law firm for a Georgia Law classroom. He taught a course on corporate criminal investigations and found that he enjoyed teaching very much.

“I think it’s important for us to give back to our profession and teaching is one way to do that,” he said. “I view the legal profession as a calling. A part of that is an obligation to serve society. … I think it’s all worthwhile if I make a positive impact on just a few students’ lives and careers.”