The College of Environment and Design is hosting Irina Bokova, former director-general of UNESCO, for its 2019 HGOR Endowed Lecture. 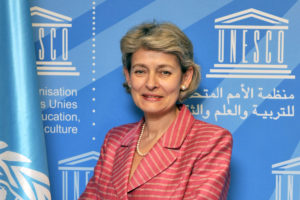 Bokova, a native of Bulgaria,  will discuss “Preserving Global Heritage in Times of War and Conflict” on Oct. 1 at 5 p.m. in the  Chapel. Open free to the public, the lecture will be preceded by a reception at 3:30 p.m. in the Jackson Street Building.

“We are honored to have Irina Bokova visit the UGA campus and address our community on this timely and complex issue,” said Sonia Hirt, dean of the College of Environment and Design, who is also originally from Bulgaria. “I believe her lecture will appeal to a broad audience, and I want to personally encourage everyone to attend our reception for her as well as the lecture.”

The first woman to lead UNESCO, Bokova served as director-general of the organization from 2009-2017. Prior to her service at UNESCO, she served two terms in Bulgaria’s parliament as well as interim deputy minister for foreign affairs. She also served as her country’s ambassador to France and Monaco.

In 2016, Bokova was among eight candidates for the post of United Nations secretary-general. She has been on the Forbes list of the World’s 100 Most Powerful Women several times. Fluent in five languages, she is a vocal advocate of European unity, gender parity and education. Bokova has successfully pushed forward a strong U.N. agenda for better preservation of humanity’s cultural heritage. In particular, she and UNESCO have proven successful in criminalizing the illegal trade in cultural artifacts and in prosecuting those who willfully destroy parts of cultural history.

Part of the yearlong observance of the College of Environment and Design’s 50th anniversary, the lecture is funded by the Atlanta design firm HGOR. It also is supported by the Office of Academic Programs, School of Public and International Affairs, the Willson Center for Humanities and Arts and the School of Law. The lecture is part of the university’s Signature Lecture Series, which features speakers noted for their broad, multidisciplinary appeal and compelling bodies of work.

For more information about the lecture and other events in the college’s 50th year anniversary, visit ced50.uga.edu.