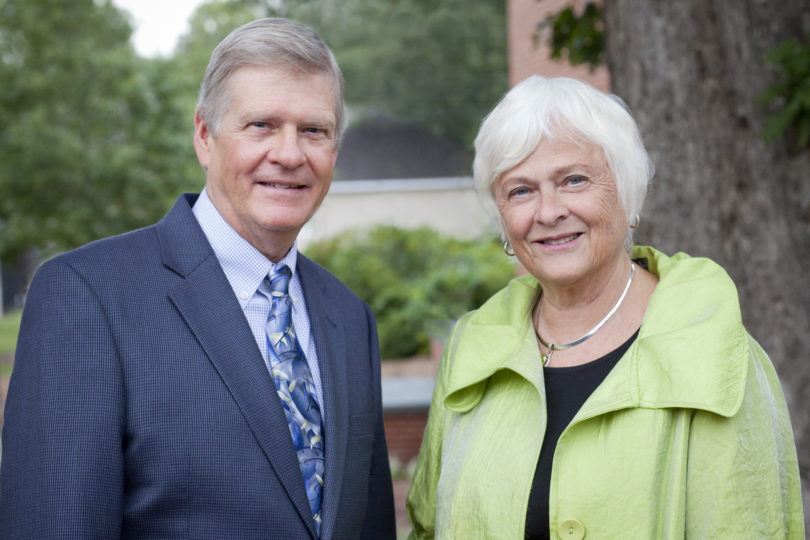 Athens, Ga. – The University of Georgia College of Public Health has received a $500,000 gift to create the Karen and Jim Holbrook Distinguished Professorship and an endowed fellowship to support graduate students in the global health field.

Karen Holbrook served as UGA provost and senior vice president for academic affairs from 1998 to 2002 before being named president of The Ohio State University. Jim Holbrook is a retired oceanographer and past deputy director of the National Oceanic and Atmospheric Administration’s Pacific Marine Environmental Research Laboratory in Seattle.

The gift reflects the Holbrooks’ lifelong commitment to higher education, the health sciences and global collaboration as well as their strong affection for UGA. The UGA Foundation is providing an additional $250,000 for the distinguished professorship in recognition of Holbrook’s transformative tenure as provost at UGA and to honor her remarkable service record in higher education.

“In addition to her enduring contributions at UGA as provost, Dr. Holbrook has served as an intellectual and administrative leader at some of the most prominent public research universities in the country,” said President Jere W. Morehead. “She has remained a close and supportive friend of the UGA community throughout her career, and we are deeply honored that she and Jim have decided to make this generous gift to UGA at this time.”

Together, the Holbrook Distinguished Professorship and Graduate Fellowship will build upon existing strengths in global health research throughout the college, increase international collaborations and expand experiential learning activities for students in international public health.

During Holbrook’s tenure as provost, she advocated for new programs in the biomedical and health sciences, which eventually led to the creation of the College of Public Health. Throughout her career, she has served as an advocate and catalyst for international research collaboration, and she continues to build relationships between institutions of higher education in the U.S. and abroad.

“I was very fortunate to work with colleagues at UGA during a time of real transformation and expansion into new program areas,” Holbrook said. “It is so gratifying to see many of those ideas have taken root. Now seems like a good time to invest in realizing more of the college’s potential for conducting meaningful international research and to emphasize the impact this activity can have for students.”

Holbrook is now a well-established higher education expert and consultant who has worked with a number of educational institutions at the international level. She currently serves as a senior adviser to the president at the University of South Florida and is on the boards of the Institute of International Education, King Abdullah University of Science and Technology, CRDF Global, Bio-Techne and Embry Riddle Aeronautical University. She was a past board chair for Oak Ridge Associated Universities.

She began her career as a biomedical researcher and National Institutes of Health MERIT Award Investigator. She earned bachelor’s and master’s degrees in zoology at the University of Wisconsin in Madison and a doctorate in biological structure at the University of Washington School of Medicine.

The Holbrooks’ gift was announced Oct. 5 at the College of Public Health’s 10th Anniversary Celebration on the UGA Health Sciences Campus. The first Holbrook Professor is expected to be named by January 2017.

“The College of Public Health could not have originated when it did without the clear vision of Dr. Karen Holbrook, who recognized both a significant need for more public health professionals in Georgia and a way that UGA could contribute to the solution,” said Phillip L. Williams, dean of the college. “Her decision now, 15 years later, with a different but equally clear and forceful vision for enhancing international research, will be just as significant as her earlier role.”