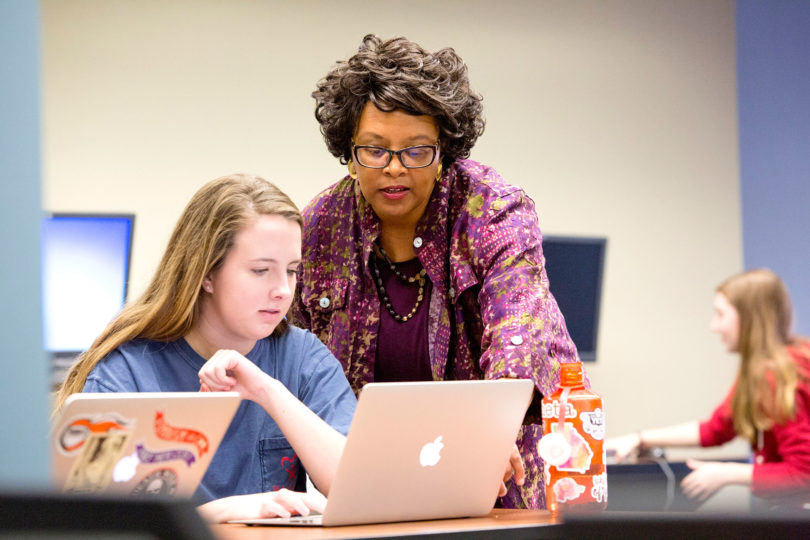 Barbara McCaskill’s parents grew up in the segregated South under Jim Crow laws.

They knew the value of an education and wanted their children to take advantage of the opportunities they were afforded as a result of the civil rights movement, so they instilled the value of history, literature and education in their children, something McCaskill credits for her 25-year career at UGA.

“I wanted to pursue a career interest that aligns with my love of history, literature and culture but also gave me an opportunity to make a real difference in terms of opportunities for people of color and to be transformative in what I do,” said McCaskill, a professor of English in UGA’s Franklin College of Arts and Sciences and one of the key forces behind developing the department’s multicultural American literature curriculum. “I’m very keen on being able to keep doors open for others to come behind me, and I’ve found that I’ve been able to do much mentoring so that we can have more diversity in academia.”

When she was named a tenured full professor in 2016, a relative sent her an article showing that only 2.2 percent of all tenured professors in American institutions were African-American women, a figure that was shocking but not incredibly surprising.

As part of her research, McCaskill helped create the Civil Rights Digital Library Initiative, an archival online database of film, manuscripts, correspondence, speeches, photographs, posters and movement buttons from the civil rights era. She worked with CURO Program undergraduates and graduate students to create Freedom on Film, a teaching and research resource linked to the site that tells the story of civil rights in nine Georgia cities and towns.

The project also gave her the opportunity to work one-on-one with more undergraduate students. McCaskill has a longstanding relationship with the Center for Undergraduate Research Opportunities and believes undergraduate research helps teach students the value of collaborative learning and teamwork.

Growing up in a military family, McCaskill moved about every two and a half years, something that made her parents worry that she and her siblings wouldn’t get a “worldly and cosmopolitan” education. So they took matters into their own hands, creating a “shelf of black books,” stories written by African-American authors, from which the children were expected to read.

McCaskill has authored books, journal essays and book chapters on African-American literature. But her 2017 President’s Fulfilling the Dream Award holds a special place in her heart because it recognizes the service and mentoring she does “behind the scenes.” The annual award recognizes individuals who help realize Martin Luther King Jr.’s dream of equality and racial justice through community work and engagement.

“Many students and community members only see the work that we do in the classroom or the research that we publish,” McCaskill said, “but my days are filled with a variety of other interactions that may be small in scope but added together are meaningful because they help the students and the colleagues that I serve grow and thrive in their careers and fulfill their dreams.”

Those tasks, like writing letters of recommendation for students and helping colleagues prepare for presentations, may be “largely invisible,” but they are some of the most meaningful to McCaskill.