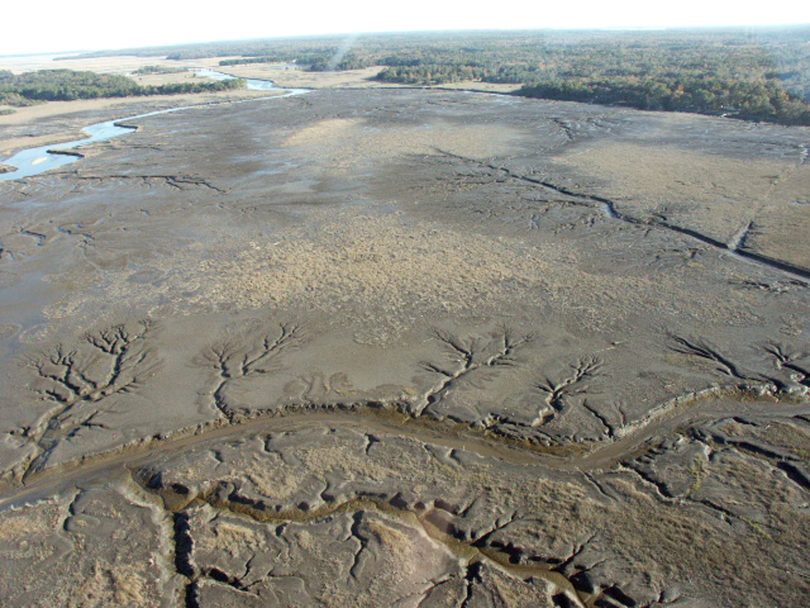 Brunswick, Ga. – Georgia resource managers, coastal scientists from diverse institutions and Georgia Sea Grant staff at the University of Georgia are working to coordinate a response to potential drought impacts along the Georgia coast.

Despite the recent rain, the National Drought Mitigation Center reported today that the majority of the state remains in extreme drought. Many of Georgia’s rivers and streams also are seeing record low flows. The Georgia Forestry Commission has given much of the state a fire danger rating of high to extreme.

The dry conditions can dramatically affect Georgia’s coastline, and that’s why the group is developing a monitoring plan. Their goals are to identify where marsh dieback might be occurring, whether the lack of rain and exceptionally low river flow are distressing vulnerable populations of coastal plants and animals and how to track other prospective drought effects on the coast.

In early September, 150 of Georgia’s 159 counties were designated as federal agriculture disaster areas due to the ongoing drought and excessive heat. Looking forward, the National Weather Service predicts a strengthening La Niña weather pattern will remain throughout the winter. Drought and low river flow may continue for another six to nine months.

“The drought is as severe now as it was in 2001 and 2002 in terms of river flow to the coast,” said Charles Hopkinson, director of Georgia Sea Grant and professor of marine sciences in the UGA Franklin College of Arts and Sciences. “If it persists for another half year, we may quite well see estuarine ecosystem conditions begin to deteriorate.”

In 2002, the coastal zone experienced a lengthy, persistent drought that led to large-scale salt marsh die-off and a blue crab population crash. Spud Woodward, director of the DNR Coastal Resources Division, said he is determined to be proactive in monitoring a possible repeat of these effects.

“When salinity in our estuaries gets too high as during a drought, organisms such as commercial and recreational fish and shellfish are stressed and susceptible to disease.” Woodward said. “We want to monitor drought effects so that we can advise those living and working on the coast of potential consequences before they become severe.”

Potential drought impacts were the focus of discussions between scientists and natural resource managers at a recent colloquium hosted by the Georgia Coastal Research Council. A follow-up workshop is being planned by DNR-CRD and Georgia Sea Grant to specify monitoring activities that would identify early warnings of the drought’s effects.

DNR-CRD and Georgia Sea Grant have a long history of working together in response to coastal crises. Immediately following the Gulf of Mexico Deepwater Horizon oil spill, the organizations convened scientists to analyze possible impacts to the East Coast, created a sampling regime to test for oil off the Georgia coast and provided expertise to state and Congressional legislators.

The groups are asking those who see signs of marsh dieback to photograph it and send images to DNR-CRD’s Jan Mackinnon at Jan.Mackinnon@dnr.state.ga.us. Or contact Mackinnon at 912/264-7218.