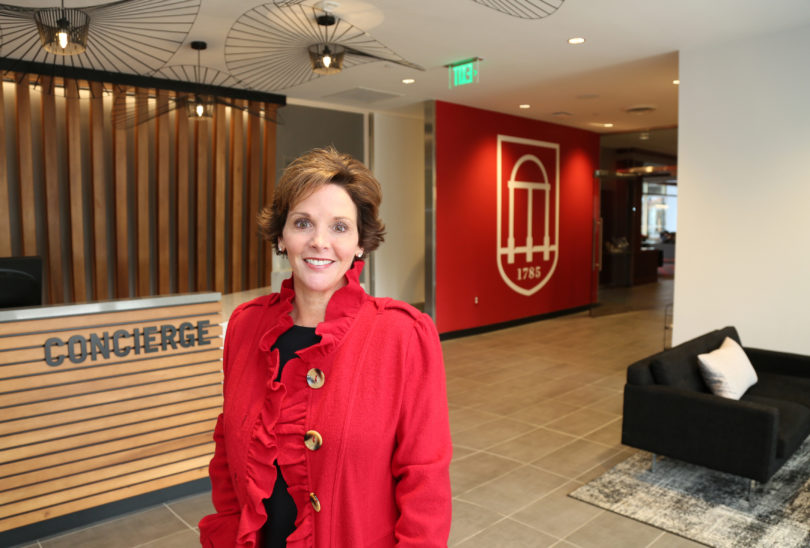 Dawn Cartee is retiring from her position as director of the Georgia Center for Continuing Education & Hotel. (Photo by Shannah Montgomery)

When Dawn Cartee joined the University of Georgia Center for Continuing Education & Hotel in July 2016, she took on the daunting task of renovating the 300,000-square-foot facility and reinvigorating its impact on the UGA community.

Less than four years later, she has overseen the renovation of the facility into a premier hotel, conference and education venue and will now wrap up her 30-plus year career in higher education with her retirement at the end of December.

“Coming to the University of Georgia was definitely the highlight of my career,” said Cartee, who is returning to her full-time residence in Statesboro, where her husband lives. “As an educator, I’ve always wanted to work for the University of Georgia. The timing was perfect because I had the professional experience I needed to bring into this position.”

During her tenure at UGA, Cartee worked alongside historic preservationists at the university to modernize and reimagine the more than 60-year-old Georgia Center while honoring its mid-century modern heritage. The team first had to establish a sense of identity for the center, which was easy, she said.

“We are UGA. Period,” Cartee said. “That’s what makes us unique.”

“Dawn’s tenure at the Georgia Center has been truly transformative, leading both the external and internal renovations of an aging facility and making it almost new again,” said UGA President Jere W. Morehead. “She has left a lasting legacy.”

The two-year, $15 million renovation project saw the “Classic Wing” of the Georgia Center undergo a substantial overhaul, with the conference and hotel rooms, lobby and restaurants tied more closely to the center’s history and UGA brand—including red and black color schemes, iconic university imagery and plenty of bulldogs.

The sense of identity established for the center also extended to its staff. Cartee spent her first two weeks on the job interviewing every full-time employee before creating a new executive team and implementing programs to energize and empower the staff.

“When I look at my team, I see a sense of pride in them,” she said. “I feel as though what we’ve created here will continue, and I feel like they’ve been empowered and given the wherewithal to make good decisions moving forward.”

Since 2016, enrollments in the Georgia Center’s continuing education and youth summer programs have grown, as have overall revenues. And, despite the ongoing construction from 2017 to 2019, hotel reservations and conference sales have increased as well.

“Even though the process was often disruptive to business operations, under Dawn’s leadership the center set new records,” said Jennifer L. Frum, vice president for Public Service and Outreach, which includes the Georgia Center. “Dawn’s time at UGA has been remarkable—she accomplished exactly what she set out to do. From day one, Dawn had her sights on enhancing and even reinventing the Georgia Center. The improvements to the hotel, reorganization of staff to operate more efficiently and increased continuing education programming have brought significant change to the facility and its educational programs.”

In addition to overseeing positive change internally and guiding the reinvention of the Georgia Center facility, Cartee also worked with the UGA College of Agricultural and Environmental Sciences to develop the curriculum for a hospitality and food industry management degree, which was launched this year. The Georgia Center will be an instructional site for the program, providing hands-on learning opportunities for students in the major.

Cartee served as president of Ogeechee Technical College in Statesboro for nine years before coming to UGA. There she led the development of more than 20 online programs, oversaw a campus expansion of 40 acres and added approximately $20 million in capital projects. Ogeechee Tech was named Georgia’s Technical College of the Year twice under her watch.

From 1991 to 1999, she held several leadership positions at Ogeechee Tech, including admissions director, registrar/director of financial aid and vice president for student services. From 1999 to 2007, she served as vice president for academic affairs at Southeastern Technical College in Vidalia.