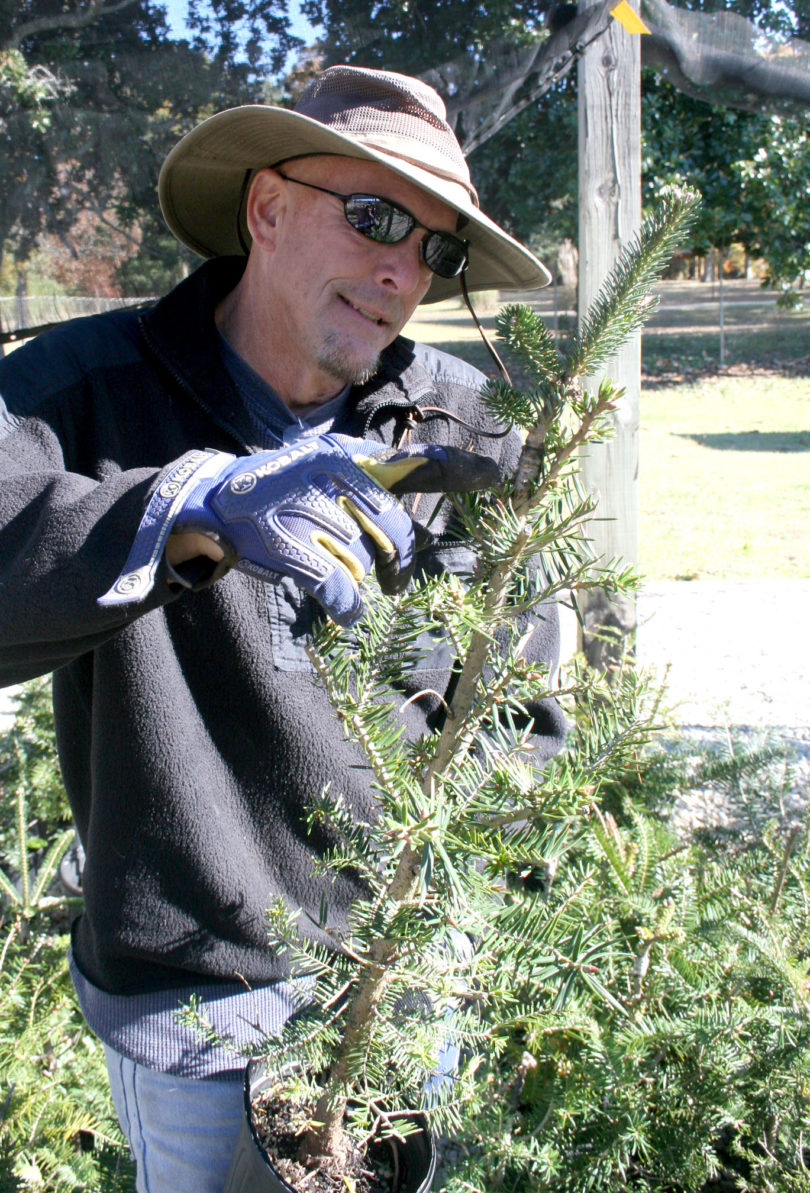 University of Georgia research coordinator Lamont Sudduth points out the grafting point on a plant where a Fraser fir shoot is grafted to Momi fir rootstock.

Griffin, Ga. – Fraser firs top the list of favorite Christmas tree varieties, but almost all the Fraser firs sold in Georgia come from North Carolina. One University of Georgia horticulturist is working to change that-by popularizing a hybrid that combines Fraser firs with their Japanese cousins the Momi firs.

Mark Czarnota, a horticulturist and associate professor in the UGA College of Agricultural and Environmental Sciences, hopes to combine the hardy Momi fir rootstock and Fraser scion, or shoot, into a tree that will grow throughout much of Georgia and the Southeast.

“I don’t expect it to take over the market, but it would be a great addition,” he said. “A lot of work needs to be done in selecting good Momi grafting stock for desirable uniformity. It’s a lifetime project, and great potential exists in trying to cross Momi fir with other firs.”

Georgia’s hot summers and mild winters make it difficult for farmers to grow Fraser firs in most of the state. While they will grow in north Georgia, the downside is the trees can be affected by the root fungus Phytophthora infestans and, if not treated, can kill infected plants.

Fir trees also produce new growth very early in spring, which makes them susceptible to the freezing temperatures that sometimes pop up in late March and damage Georgia crops.

“When new shoots start to grow in early spring, they are often severely damaged or killed by the below-32-degree temperatures that we often have during the spring here in Georgia and much of the Southeast,” Czarnota said.

Using a U.S. Department of Agriculture grant, Czarnota is working to find other alternatives for Georgia Christmas tree farmers. Working in association with growers in Lovejoy and Terrytown, Czarnota grafts Fraser firs onto containerized Momi fir rootstock on the UGA campus in Griffin.

One of Czarnota’s collaborators, 84-year-old Earl Worthington, grows Christmas trees in Lovejoy. Worthington was one of the first growers to try to grow firs in the Georgia piedmont region. He hopes to someday grow enough Fraser firs to avoid buying from growers in western North Carolina.

He has been grafting Fraser firs onto Momi firs for the past 17 years. In the beginning, it took 10 years for him to grow an 8- to 9-foot tree.

The biggest problem he now faces with grafting efforts is the inconsistencies.

“Some (of the trees) turn out very yellow, some very stiff, some are green all year, some flush early and some flush late,” Worthington said. “Grafting trees is definitely a project for someone with patience.”

A native of Japan, the Momi fir made its debut in Georgia in the early 1990s. Momi firs are more tolerant of the Phytophthora fungus and of Georgia’s weather, but they aren’t perfect.

“The planting culture of Momi fir is very different from most other Christmas tree species that growers are currently growing,” Czarnota said. “Needless to say, Momi firs’ first introduction was a miserable failure.”

Momi firs can grow in Georgia, but farmers have to be careful to provide irrigation to young plants for two or three years and adjust soil pH to around 6.5, he said. Plus, growers in the Southeast weren’t happy that it takes six to eight years for the tree to reach a desirable Christmas tree size. Traditional Georgia Christmas tree species like Leland cypress and Virginia pine are mature enough to sell in three to four years. When it comes to growing Christmas trees, the sooner a tree matures, the sooner the farmer can take it to market.

Researcher John Frampton at North Carolina State University also is trying to crossbreed Momi and Fraser firs to breed a hybrid Phytophthora-resistant fir. In the meantime, he is encouraging North Carolina growers to plant Momi-Fraser grafts.