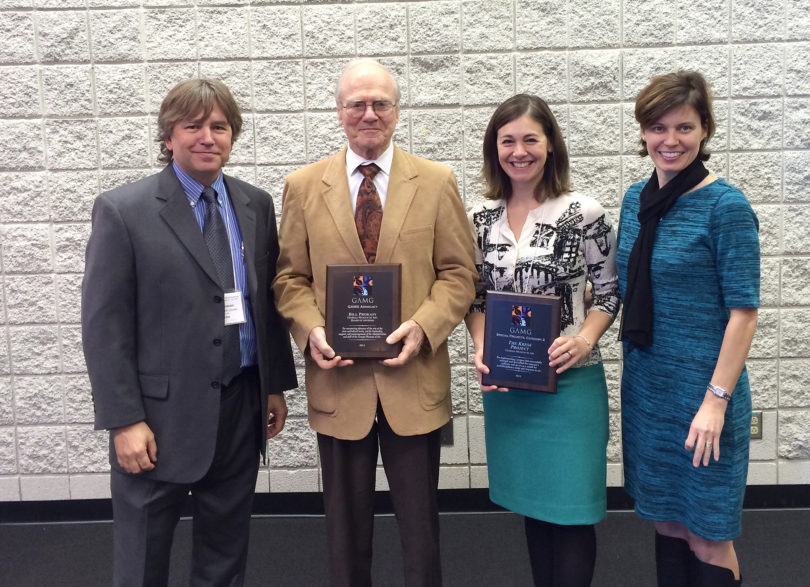 Athens, Ga. – The Georgia Museum of Art at the University of Georgia recently received three regional and state awards, two from the Georgia Association of Museums and Galleries and one from the Southeast Chapter of the Art Libraries Society of North America.

The museum’s exhibition catalog for “Art Interrupted: Advancing American Art and the Politics of Cultural Diplomacy” earned a Mary Ellen LoPresti Publication Award from the Southeast Chapter of the Art Libraries Society of North America. The chapter established the LoPresti Publication Awards Competition in 1985 to recognize and encourage excellence in art publications issued in the southeastern U.S. The publication awards are named in honor of Mary Ellen LoPresti, former design librarian at North Carolina State University.

The “Art Interrupted” exhibition catalog, published in 2012, discusses the role of American modern art in the fight against communism. The catalog, described by the chapter as “beautifully designed,” includes full-page, full-color reproductions of all 107 works in the exhibition accompanied by scholarly essays and biographical information on artists. The chapter called it: “An impressive record of both American art and record of one man’s curatorial vision of art as a political and ideological weapon, this book was the stand-out in the exhibition catalog entries and favorite of our judges.”

The Kress Project, created to celebrate the 50th anniversary of the museum’s Kress Study Collection of Renaissance and Baroque paintings, won the Georgia Association of Museums and Galleries award for Special Projects. Also honored was Bill Prokasy, a longtime supporter of the museum, who won the association’s award for advocacy.

The Kress Project focused on engaging new audiences through a wide array of multidisciplinary events related to the Kress Study Collection, including a print family guide, Family Day, outreach to senior citizens, films and docent education during 2011. Additionally, upcoming in 2014 are an international conference on early Italian art and a curriculum-structured K-12 teaching packet.

The focal point of the Kress Project was the public call for entries in response to Kress Collection artworks and the subsequent publication of the winners in a book in 2013. The book, which previously won the gold award for books and catalogs at the Southeastern Museums Conference, featured 55 of 403 international submissions in media including paintings, poems, films, dances and even recipes and podcasts.

Prokasy first advocated for the museum in his position as provost and vice president of academic affairs at UGA. Prokasy currently serves the museum as a member of the board of advisors, a donor and an advocate for the museum at the state and federal levels.

During Prokasy’s tenure at UGA, he helped the museum create several new curatorial and administrative positions, including those for the curators of decorative arts and education as well as the deputy director and the special events coordinator. He and his office oversaw the construction of the Performing and Visual Arts Complex, which included Phase I of the museum’s facility. He also helped with the complex’s grand opening in April 1996.

Prokasy lobbies at the state and federal level for support for the Georgia Council for the Arts, Georgia Humanities Council, art education in schools, federal funding for the arts and tax laws that promote charitable giving to museums by artists and individuals. Prokasy also helped establish Adopt-a-Bus, a program in which donors support bus transportation to the museum for schools in outlying, underserved counties.