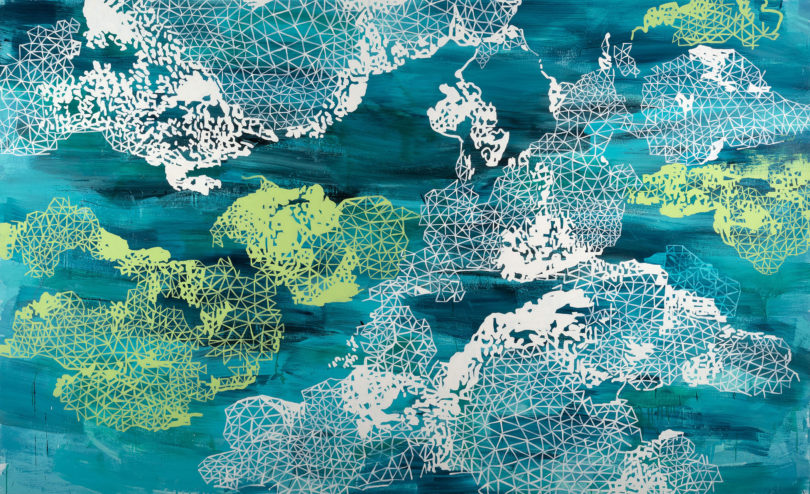 Rebecca Rutstein’s painting, part of “Progenitor Series,” is on display at the Georgia of Museum of Art Nov. 1 through October 2019. The work is part of the exhibition “Out of the Darkness: Light in the Depths of the Sea of Cortez.” (Photo by Karen Mauch)

The exhibition Out of the Darkness: Light in the Depths of the Sea of Cortez by Rebecca Rutstein will be on view at the Georgia Museum of Art beginning Nov. 1.

Rutstein is both an award-winning artist and an ocean explorer. This fall, as UGA’s Delta Visiting Chair for Global Understanding, she will embark on her fifth deep-sea expedition/artist’s residency, with a team of scientists led by the University of Georgia’s Samantha Joye and the University of North Carolina’s Andreas Teske.

While the scientists study hydrothermal vents and the unique carbon-cycling processes occurring in Mexico’s Guaymas Basin in the Sea of Cortez, Rutstein will set up her studio on the ship and create new works inspired by the data they’re collecting in real time. The works on display in the year-long exhibition were commissioned as part of her tenure as Delta Visiting Chair.

An immersive 64-foot-long steel sculpture installation will be on display in the museum’s Patsy Dudley Pate Balcony through October 2019. It contains hexagonal sculptural forms and reactive LED lights that will create trails mimicking the movements of the viewer. Its forms were inspired by data Joye previously collected on the hydrocarbon structures and bioluminescence present in the Guaymas Basin.

The exhibition also will include “Progenitor Series,” a 22-foot-tall painting installation spanning two stories in the museum’s M. Smith Griffith Grand Hall and on view through March 31. The vertical orientation is inspired by the water column and Joye’s 2,200-meter descent to the ocean floor at Guaymas Basin. In each canvas of the series, Rutstein shifts scale and orientation while utilizing various data collected at sea, including sonar maps of hydrothermal vents on the ocean floor. Through the lens of abstraction and with her continued interest in the fractal geometry of nature, Rutstein sheds light on the little-known processes at Guaymas Basin, connecting us with this hidden realm.

“We are fortunate to work with an artist so expertly skilled in the languages of both art and science,” said Annelies Mondi, the museum’s deputy director. “Rebecca is gifted in translating the veiled mysteries of the natural world so that through her sculpture and painting, we can all experience the wonder of our surroundings.”

The exhibition opens during UGA’s annual Spotlight on the Arts festival, and coincides with the Alliance for the Arts in Research Universities (a2ru) conference, at which Rustein and Joye will take part in a public conversation moderated by Willson Center director Nicholas Allen on Nov. 2 at 9 a.m. in Mahler Hall in the Georgia Center for Continuing Education & Hotel. Rutstein will return for a second event with Joye in the museum’s M. Smith Griffith Auditorium on March 28, 2019.

All programs are open free to the public unless otherwise indicated.