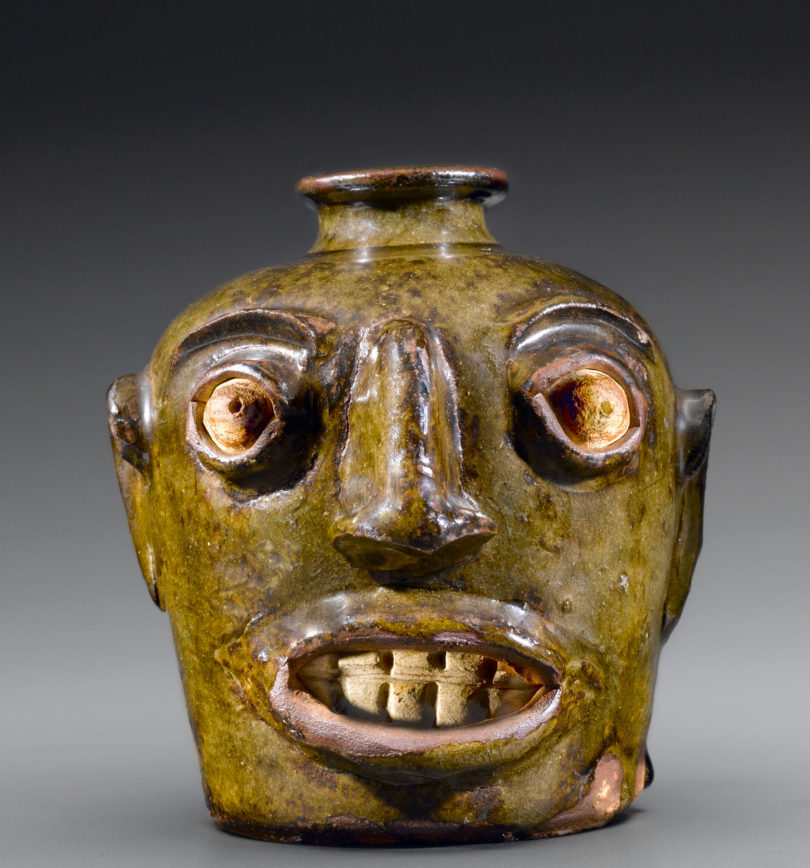 This historical face jug will be on display during the exhibition "Face Jugs: Art and Ritual in 19th-Century South Carolina

The Georgia Museum of Art will present the exhibition Face Jugs: Art and Ritual in 19th-Century South Carolina May 4 to July 7. This exhibition draws from the collections of face vessels from the Edgefield District of South Carolina and is organized by the Milwaukee Art Museum and by the Chipstone Foundation, a decorative arts foundation in Milwaukee committed to fostering education and continual research in the decorative arts.

Face Jugs presents these vessels as a celebration of their formative and aesthetic power in conjunction with discussions of their cultural meanings to African-Americans in Edgefield. Claudia Mooney, assistant curator at the Chipstone Foundation, served as curator for the exhibition.

The face jug form originated in the pottery created by enslaved African-Americans during the second half of the 19th century in Edgefield. Made of turned stoneware, they include facial features crafted from kaolin, a locally sourced clay and a material considered sacred in West Africa.

Art historians originally viewed these vessels as mere utilitarian water storage jugs. Others later proposed the jugs served a ritualistic purpose as storage for what were thought to be magical materials. More recent research indicates that they had multiple uses and most likely have been misunderstood by outsiders.

White potters appropriated the design and discontinued the use of kaolin and made their face jugs more whimsical.

“The persistence of African culture in the work of enslaved craftsmen is a strong statement of resistance and on human dignity,” said Dale Couch, GMOA’s curator of decorative arts and the in-house curator of the exhibition. “This is the most African of art in North America, but with that being said, it still is hybridized with other cultural prototypes, particularly European, which creates a complex array of meanings.”

Events connected with the exhibition include: Teen Studio, a workshop on face jugs for teens led by local artist Hope Hilton on May 2 from 5:30-8:30 p.m.; Family Day: Funky Face Jugs on May 11 from 10 a.m. to noon; and the Wanderer Symposium, an all-day event that focuses on the slaves who landed on Jekyll Island in the ship the Wanderer and their descendants on May 17 from 9 a.m. to 3 p.m.