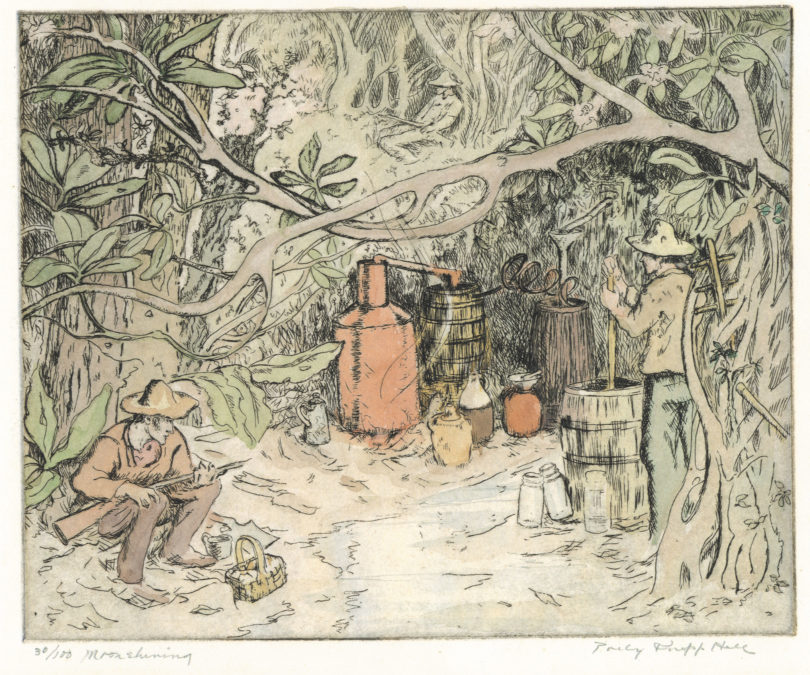 Athens, Ga. – The Georgia Museum of Art will present the exhibition “Polly Knipp Hill: Marking a Life Through Etching” from April 7 to June 3. This retrospective exhibition features 32 prints by the artist, along with selected ephemera that include vintage photographs and examples of many stages in the printmaking process.

Organized by guest curators Lynn Barstis Williams Katz and Enee Abelman, this show brings to light a talented and technically skilled printmaker whose work was often overshadowed by that of her husband, the artist George Snow Hill. It is organized icnographically according to the categories into which the artist herself divided her print oeuvre: Paris, America with “street and countryside scenes,” Florida, Arcadia (or reminiscences of her childhood), children’s games and mountain culture. The groupings also reflect the chronology of her etching career.

Born in 1900 in Ithaca, N.Y., Hill studied illustration at the Crouse College of Fine Arts at Syracuse University, where she also met her husband. She first studied etching in Paris at the city’s private art school, the Académie Colarossi, while living in the Latin Quarter. Her work during this period consisted mainly of European architectural views and was heavily influenced by such conservative American printmakers as John Taylor Arms and Samuel Chamberlain.

After the stock market crash of 1929, the Hills moved back to the U.S., where they worked steadily in home studios in New York City, St. Petersburg, Fla., and, later, the small lakeside town of Highlands, N.C. By the end of the 1930s, Hill’s intaglio oeuvre, which now included drypoints and roulettes in addition to etchings, was the subject of significant exhibitions. The United States National Museum, now part of the Smithsonian Institution, sponsored a solo exhibition of 50 of her etchings and drypoints, mostly European scenes, in January 1937. In 1941, she sold an etching to the Library of Congress, which eventually purchased a total of five of her works.

Hill’s prints depict mostly scenes of leisure, but some address social issues, and, taken as a whole, they illustrate the development and changes of an individual artistic sensibility. According to Katz and Abelman, “Like other women artists whose careers began in the 1920s . . . she created captivating scenes portraying American culture. Although she first focused on European architecture, in her mature period, her broad intaglio oeuvre grew to encompass poignant, amusing and slightly satirical genre scenes that featured communal activity.”

The exhibition will be accompanied by a volume of the museum’s Bulletin, including full-color reproductions of many of Hill’s prints and an extensive essay on her life and career by Katz and Abelman.

Note to editors: An image of one of Hill’s etchings is available for download at http://multimedia.uga.edu/media/images/Moonshining.jpg.

Cutline for image: One of the images on display in GMOA’s “Polly Knipp Hill: Marking a Life Through Etching” exhibition is Moonshining.