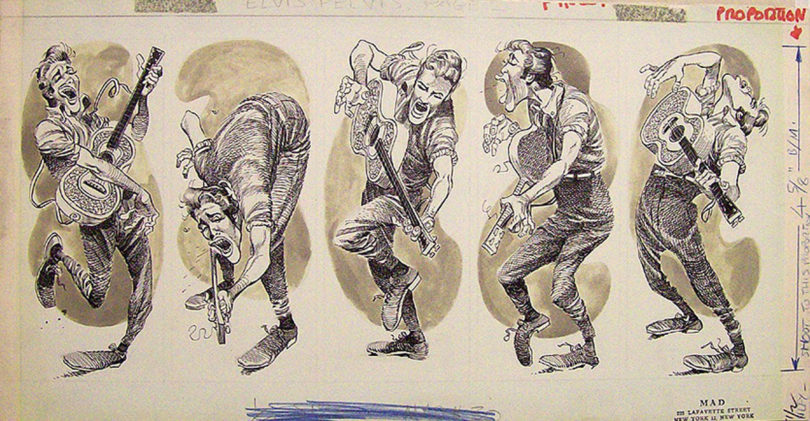 Event is part of UGA Spotlight on the Arts festival Nov. 3-11

Athens, Ga. – The Georgia Museum of Art at the University of Georgia will present the exhibition “Beyond the Bulldog: Jack Davis” from Nov. 3-Jan. 6. Organized by guest curator Patrick Dean, a cartoonist who sits on the board of the Jack Davis Foundation, the exhibition goes deeper into Davis’ career than the sports and caricature work for which he is best known, focusing on his black-and-white drawings in particular.

The exhibition also is part of UGA’s Spotlight on the Arts festival to be held Nov. 3-11.

Perhaps best-known in Georgia for his depictions of Southeastern Conference mascots tussling, Davis (b. 1924) has had a lengthy career in illustration and cartooning, with an immediately recognizable style and an influence that extends far beyond his home state. Having published his first cartoon at the age of 12, Davis studied with the artist Lamar Dodd in UGA’s art school, which he attended on the G.I. Bill, and honed his skills drawing for the Red and Black, the student newspaper, and Bullsheet, an Athens humor publication. After graduating, he moved to New York, where he attended the Art Students League before landing work with William Gaines at EC Comics.

Famed in particular for his speed and a tendency to create images overflowing with colorful characters, Davis was one of the founding artists of Mad magazine, supplied covers for Time and TV Guide and designed numerous album art and movie posters. He created his first art for UGA’s athletics program in 1948 when he drew Head Football Coach Wally Butts for the front and back of that year’s media guide, and the relationship has lasted ever since.

Dean said, “Davis’ prolific career goes further back than most people realize. Some of this exhibition displays his work from EC Comics, including two complete comic stories for museum visitors to read. These pages show his skill as a sequential artist, with an emphasis on people’s pained and terrified faces and hand gestures. Still, even in these comics, his familiar style hints at his trademark humor and warmth. There’s also something particularly southern in his work of all eras, like his running figures with clumps of red clay stuck to their feet.”

This exhibition attempts to show Davis’ range by bringing together a selection of his original work that demonstrates his breadth of subjects and his skills as an artist focusing on American popular culture.

Dean continued, “The point of the show isn’t to shun his more popular sports drawing, but to bring attention to his work that may not be as well known to the general public. Visitors may recognize some of these images, but I hope they appreciate the level of detail Davis put into his work. Some of that detail gets lost when the images are shrunk down and printed on paper stock of varying quality. Studying Jack Davis’ crosshatching and brushwork will be a real treat to anyone who’s admired this man’s work.”

Dean will speak on Davis’ career Nov. 4, at 3 p.m. at the museum, with a reception to follow.

The W. Newton Morris Charitable Foundation and the Friends of the Georgia Museum of Art will sponsor the exhibition.

Museum Information
Partial support for the exhibitions and programs at the Georgia Museum of Art is provided by the Georgia Council for the Arts through appropriations of the Georgia General Assembly. The council is a partner agency of the National Endowment for the Arts. Individuals, foundations and corporations provide additional museum support through their gifts to the University of Georgia Foundation. The Georgia Museum of Art is located in the Performing and Visual Arts Complex on the East Campus of the University of Georgia. The address is 90 Carlton Street, Athens, Ga., 30602-6719. For more information, including hours, see http://www.georgiamuseum.org or call 706/542-GMOA (4662).

Spotlight on the Arts
The Spotlight on the Arts festival will be presented by the UGA Arts Council, of which the Georgia Museum of Art is a participating unit. More than 50 events are scheduled during the nine-day festival in November. For more information, see http://arts.uga.edu/about/spotlight-festival/.