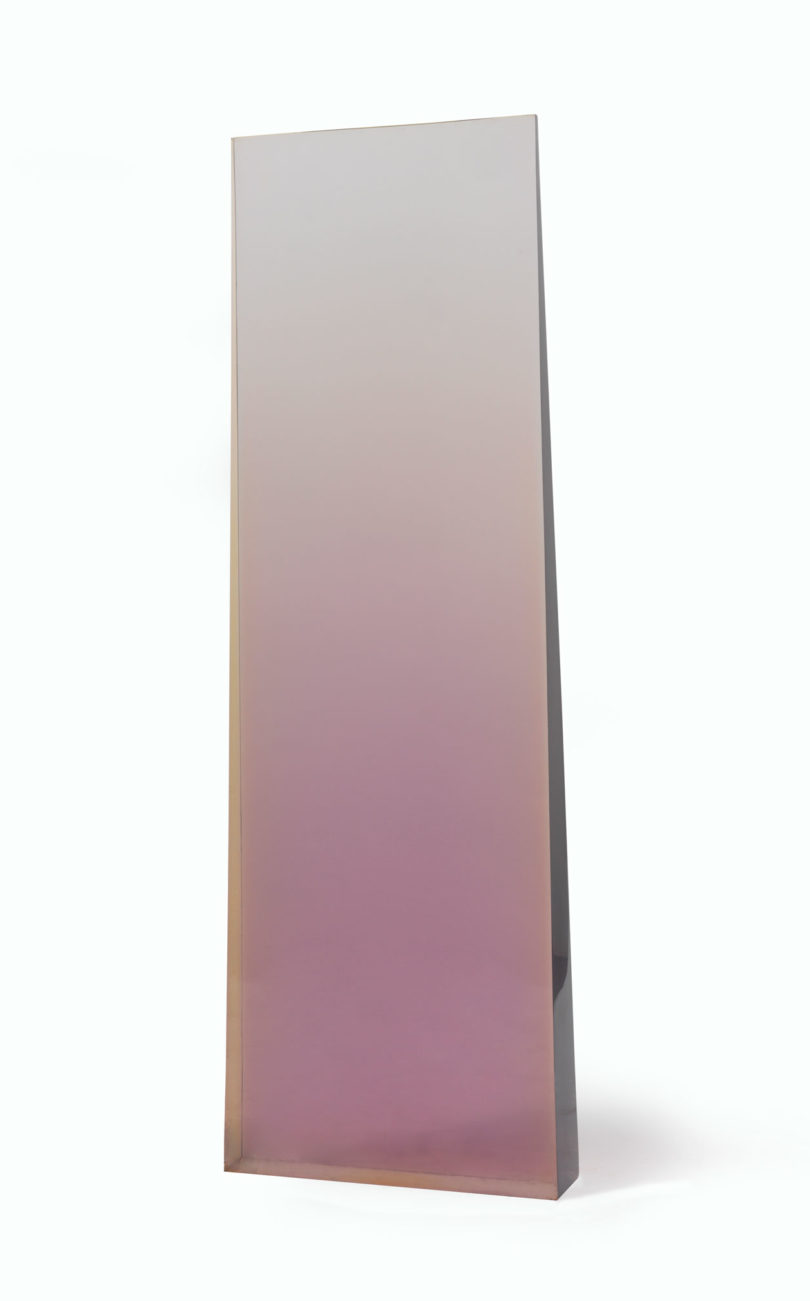 Athens, Ga. – The Georgia Museum of Art at the University of Georgia will present a definitive exhibition of large-scale works by the American sculptor De Wain Valentine Sept. 8-Jan. 27. The exhibition “De Wain Valentine: Human Scale” will feature eight translucent sculptures, most measuring between six and eight feet tall.

Valentine was already working with plastics when he moved from Colorado to the California coast in 1965, where he began a “love affair with the sea and the sky” and sought to render them in his art. He and his peers using similar materials-Larry Bell, Robert Irwin, Helen Pashgian, Peter Alexander and others-got the label “Finish Fetish” from critics, implying an obsession with material that was attributed to the region’s aerospace industry and surfboard and car culture. Although he was the most technically advanced of the group (he partnered with Hastings Plastics to develop a material that made his large forms possible and was eventually sold as Valentine MasKast Resin), his intention was for the surface of the sculptures to disappear, allowing for the diffusion, transmission, refraction and reflection of light. Such phenomenological features and his moves toward a more environmental scale resulted in an association with the Light and Space art movement of his time.

“From explorations of perception to his use of materials from the aerospace industry and on the cutting edge of both, Valentine’s work perfectly encapsulates the late 1960s while remaining exciting today,” said Lynn Boland, GMOA’s Pierre Daura Curator of European Art.

Recent exhibitions have highlighted Valentine’s sculptures, most notably in 2011 at the J. Paul Getty Museum as part of Pacific Standard Time, a multi-museum event examining postwar Los Angeles art. The exhibition at GMOA will present the largest number of these works ever assembled together. The installation will provide ample space for viewing the works in the round, and the Getty-produced video “From Start to Finish: De Wain Valentine’s Gray Column” will screen continuously in the Alonzo and Vallye Dudley Gallery.

Several events are scheduled to coincide with the exhibition. 90 Carlton, a quarterly open house with music, refreshments and a workshop, will include a tour with Paul Manoguerra, GMOA’s chief curator and curator of American art, on Sept. 13 at 6 p.m. The museum’s monthly Family Day on Nov. 10 from 10 a.m.-noon will focus on the exhibition with a tour and art-making activity for children. Elegant Salute XIII, a biennial gala fundraiser to be held Jan. 19, will celebrate the exhibition with the theme Black to White. The evening is a black tie/white tie formal dinner that will be followed by a full spectrum disco featuring music by the Athens disc jockey duo the Krush Girls.

Manoguerra said of the exhibition, “The Georgia Museum of Art is pleased to be able to present so many of De Wain Valentine’s human-scale sculptures in our galleries. The sculptures represent an important moment in American visual culture and in the intersection of technology and art in California.”

Museum Information
Partial support for the exhibitions and programs at the Georgia Museum of Art is provided by the Georgia Council for the Arts through appropriations of the Georgia General Assembly. The council is a partner agency of the National Endowment for the Arts. Individuals, foundations and corporations provide additional museum support through their gifts to the UGA Foundation. The Georgia Museum of Art is located in the Performing and Visual Arts Complex on the East Campus of UGA. The address is 90 Carlton Street, Athens, Ga. 30602-6719. For more information, including hours, see www.georgiamuseum.org or call 706/542-GMOA (4662).