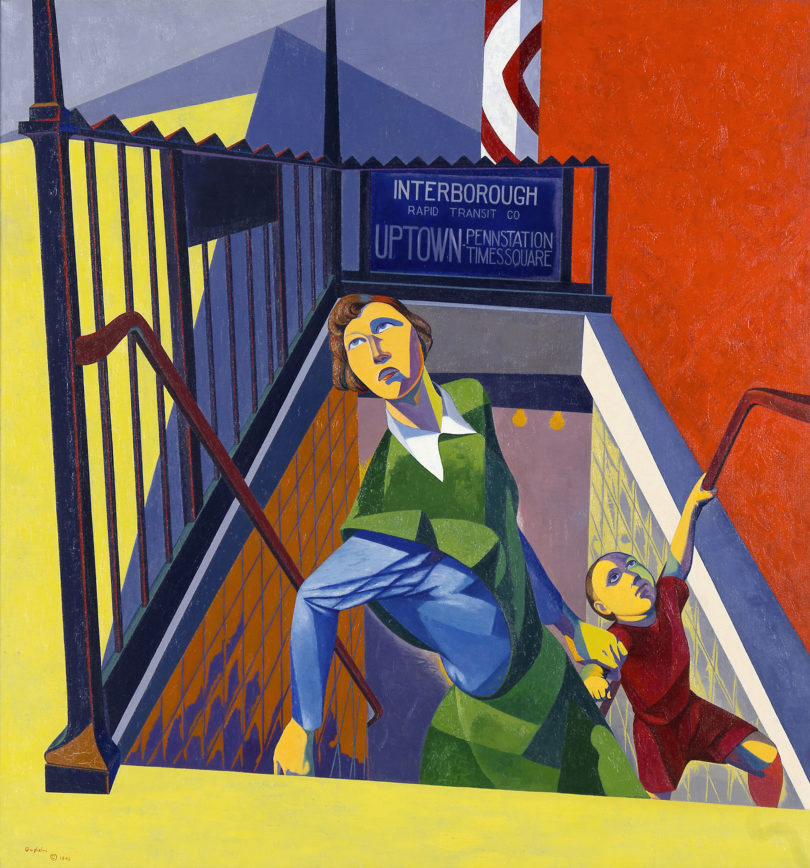 From Jan. 25 to April 20, the Georgia Museum of Art will serve as the closing venue for the exhibition Art Interrupted: Advancing American Art and the Politics of Cultural Diplomacy, a traveling show that focuses on 1940s art, politics and censorship.

In 1946, J. LeRoy Davidson at the U.S. State Department put together a traveling exhibition of contemporary American paintings known as Advancing American Art. Intended to foster goodwill among the U.S., Europe and Latin America, the exhibition demonstrated the power of democracy to foster great art, but the result was not what the organizers had hoped. Provoked by the press, members of the U.S. Congress and President Harry Truman deemed the art in the show un-American. By 1948, the works had been auctioned off to buyers across the nation, Davidson was forced to resign, his position abolished and the entire project was a laughingstock in the media. Art Interrupted reunites nearly all of the paintings Davidson purchased, re-creating his original proposed exhibition and investigating the U.S. State Department’s use of fine art as a valuable tool in the Cold War.

Davidson, who served the State Department as a visual arts specialist, was responsible for developing a set of touring exhibitions to demonstrate not only the diversity of American modern art, but also the power of democracy to nourish freedom of expression. Advancing American Art originally consisted of 79 oil paintings, and the State Department paired it with smaller collections of works in watercolor, tempera, gouache and other media, with intentions to exhibit them to Europe, Asia and South America.

Advancing American Art initially met with positive press, such as its premiere at the Metropolitan Museum of Art in October 1946 and its brief appearances in Paris and Prague. But criticism followed soon after. William Randolph Hearst’s New York Journal-American ran images of the work with sarcastic captions. Conservative artists’ groups, unhappy with the exclusion of more traditionally rendered material, mounted letter-writing campaigns. Congressmen investigated the backgrounds of the artists, many of whom were immigrants or had left-wing leanings, and even Truman expressed his disdain for modern art in public. The ensuing debacle led Congress to eliminate funding for the project, leaving the art to be auctioned off by the War Assets Administration and Davidson without a job.

Although Davidson’s plan to promote the vitality of American art abroad failed, his project had a second life as the works were dispersed across the nation. In the collections of, primarily, university museums and galleries, including the three organizing institutions, they exemplified the principles for which he had intended them and reached countless young Americans.

The exhibition is organized by the Jule Collins Smith Museum at Auburn University, the Georgia Museum of Art and the Fred Jones Jr. Museum of Art at the University of Oklahoma. It was made possible by grants from the Henry Luce Foundation and the National Endowment for the Arts as part of American Masterpieces: Three Centuries of Artistic Genius.

Events associated with the exhibition include a preview/opening reception Jan. 24 at 7 p.m. ($5, free for members of the Friends of the Georgia Museum of Art); a panel discussion focusing on issues of censorship on Jan. 26; a lecture by Louis Menand, a New Yorker writer and Harvard English professor, Feb. 6 at 6 p.m.; “Family Day: Modern Masterpieces,” Feb. 8 from 10 a.m. to noon; Teen Studio, March 6 from 5:30-8:30 p.m.; a film series featuring Ninotchka and Notorious; and “While Silent, They Speak: Art and Diplomacy,” an emerging scholars symposium organized by the Association of Graduate Art Students at UGA in partnership with the museum, March 28 and 29.