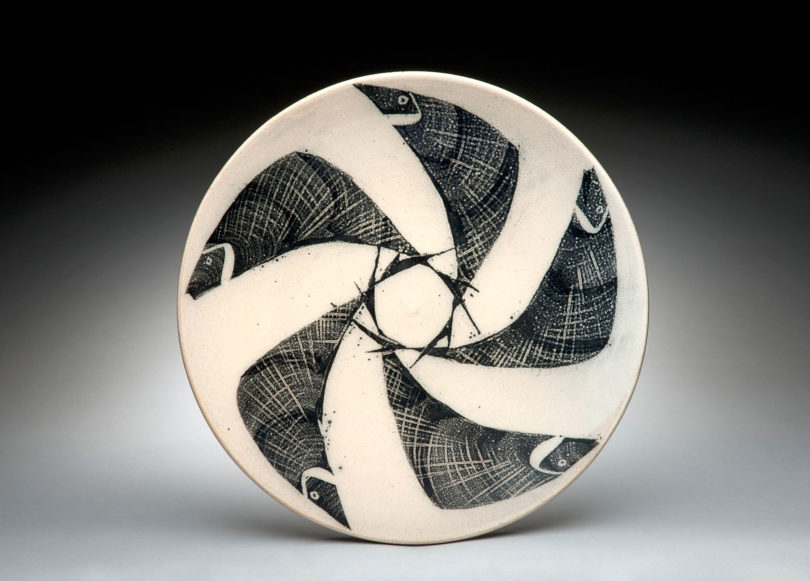 Artist Michael Simon made this bowl with five black fish in 2004. The stoneware has a salt glaze. This piece is on display at the Georgia Museum of Art July 20- Sept. 8

The Georgia Museum of Art will host the exhibition “Pick of the Kiln: The Work of Michael Simon” July 20 through Sept. 8.

Simon, born and raised in Minnesota, has lived in the Athens area for many years. He attended the University of Minnesota, where he studied under nationally acclaimed potter Warren MacKenzie, then moved to Georgia in 1970.

He lived at Happy Valley, a pottery commune outside of Athens established by a friend and former classmate at Minnesota. He received a master of fine arts degree in ceramics from UGA in 1981.

Simon uses a salt kiln to fire his work, which creates a varying surface and does not require a separate glazing process. Over time, his work has evolved and changed subtly, and the exhibition will illustrate some of those changes as well as Simon’s shifting interests as an artist. In the mid-1980s, Simon began keeping one pot from every kiln he fired in order to document this process of change. The selected pots make up the material of the exhibition.

“It provides the opportunity to fathom a leading ceramic artist’s view of his own work as it develops over time. Caroline Maddox (the museum’s director of development and the curator of the exhibition), in collaboration with Michael, has selected a body of work that is metaphorically like an archaeological trench: It simultaneously reveals the chronology of his work and the creative consciousness of the artist. These are brilliant examples of modern craft,” said Dale Couch, curator of decorative arts at the museum.

A reception for the exhibition will be held Aug. 25. It will begin at 1:30 p.m. with a group discussion, moderated by potter Mark Shapiro, in the museum’s M. Smith Griffith Auditorium.