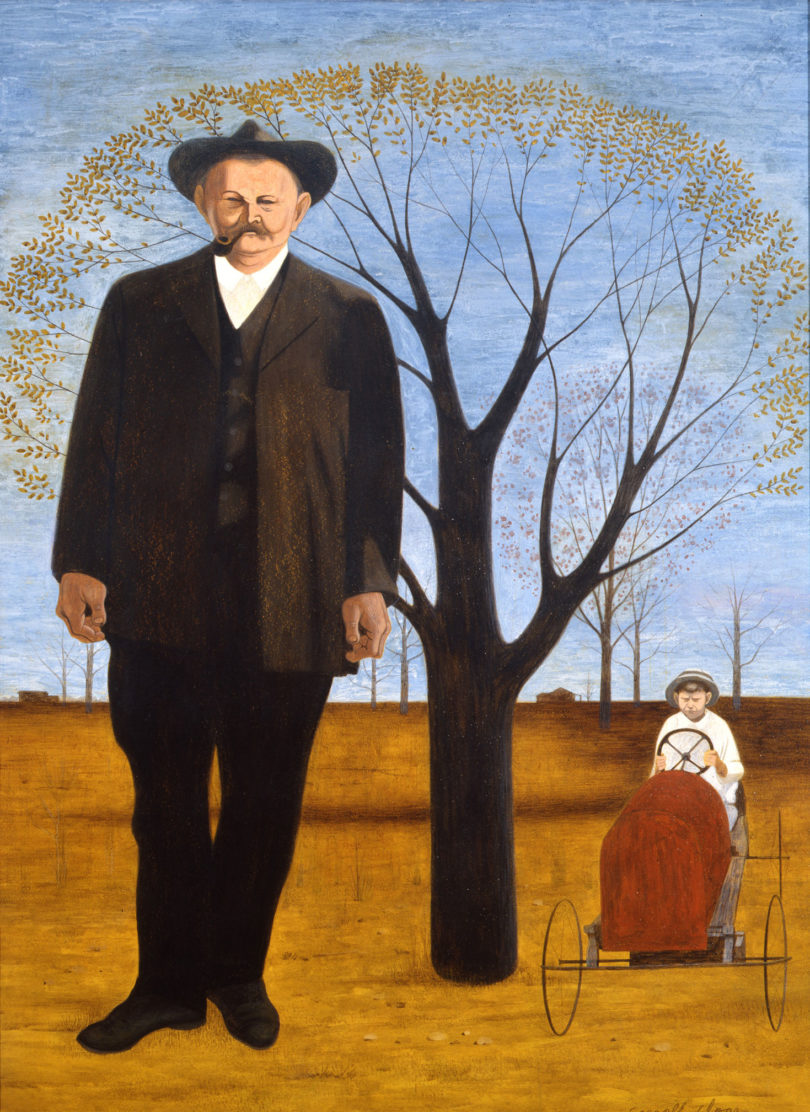 Carroll Cloar's painting "My Father Was Big as a Tree" will be on display at the Georgia Museum of Art Oct. 5-Jan. 5

Athens, Ga. – The Georgia Museum of Art at the University of Georgia will host the exhibition “The Crossroads of Memory: Carroll Cloar and the American South” Oct. 5 through Jan. 5.

Marking the centenary of Carroll Cloar’s birth, the exhibition includes approximately 75 paintings that depict a unique and timeless vision of the South. Organized by Memphis Brooks Museum of Art and the Arkansas Arts Center, this exhibition features works by Cloar from major public collections (the Metropolitan Museum of Art, the Whitney Museum of American Art, Crystal Bridges Museum of American Art and the Hirshhorn Museum and Gardens) as well as rarely seen works still in private hands.

Born in the small town of Earle, Ark., in 1913, Cloar painted from memories of his rural childhood. He spent most of his life in the South, attending Southwestern at Memphis College and later, Memphis College of Art. He later received a Guggenheim Fellowship, allowing him to travel to Mexico, where he was exposed to and influenced by realist painters including Diego Rivera.

Cloar’s paintings, with their saturated colors, repeating patterns and shallow picture planes, pay homage to great American realist masters and Pointillism. The sprawling landscapes and scenes of daily life showcase a classic view of the South through a surrealistic lens.

Cloar’s widow, Patricia Milsted-Cloar, is an Athens resident and docent at the museum. Three works featured in the exhibition come from her private collection. While Cloar is known for his depictions of the South, his widow believes that they have a universal appeal.

“People from different countries would often stay in our home, and they would be stunned by the paintings,” said Milsted-Cloar. “The feelings they evoke are the same in everyone. This exhibition is new territory for him, as he is more well known in New York and the mid South. Carroll would have loved this.”

Programs associated with the exhibition include 90 Carlton: Fall, a reception hosted by the Friends of the Georgia Museum of Art on Oct. 11; a lecture by Patty Bladon, assistant director of Memphis Brooks Museum of Art and coauthor of the forthcoming book “The Last of Old America: The Art and Life of Carroll Cloar,” on Oct. 17; a program with Grandparents Raising Grandchildren on Oct. 26; and a Family Day on Nov. 10 in association with UGA’s Spotlight on the Arts festival and featuring local band Like Totally.

The exhibition is sponsored locally by YellowBook USA, the W. Newton Morris Charitable Foundation and the Friends of the Georgia Museum of Art.