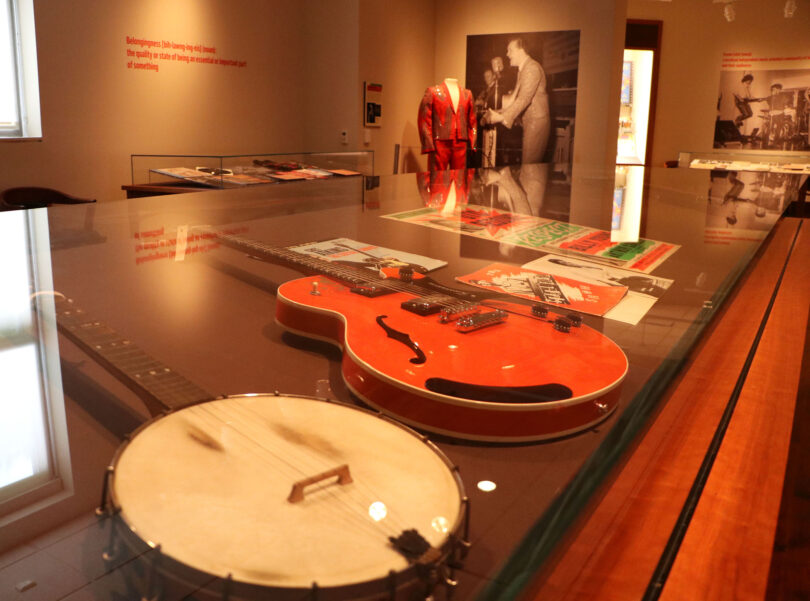 Songwriters say that the best music tells a story through its notes as well as the lyrics. But how does one tell the story of music?

The University of Georgia’s Hargrett Rare Book and Manuscript Library tells it through the song lists, instruments, concert gear, posters and other memorabilia on display as part of the exhibition “Georgia on My Mind: Finding Belonging in Music History.” The exhibition and connected events are all free and open to the public.

From an eye-catching performance costume worn by country music legend Whisperin’ Bill Anderson to the bee-hive wigs that The B-52s made iconic on the pop scene, polished guitars, worn bongos, faded concert tickets and flashy posters, the display creates a visual story about how listeners and fans have connected with talented Georgia musicians over the last century. In one corner, a listening station allows visitors to look through the vinyl records to hear their favorite Georgia artist, as well.

The display explores some of the early roots of Georgia music history, including the McIntosh County Shouters, a group that performs the tradition of ring shouting, as well as Piedmont blues singer and guitarist Blind Willie McTell and gospel and bluegrass musicians from the early 20th century. The exhibition continues a journey from the legends of rock and rhythm and blues such as Little Richard and Otis Redding to Southern rock legends the Allman Brothers Band and more modern chart-busters such as Little Nas X.

“This exhibit presents how diverse the music of Georgia is,” said Maggie Neel, a student pursuing her doctorate in history at UGA who curated the display. Neel worked on the project through the early quarantine stage of the COVID-19 pandemic, listening to a 10-hour playlist of Georgia musicians for inspiration. “There was such a longing for community and being a part of scene, and I could see that in these music artifacts. Music really does bring us together.”

The foundation of the exhibition draws upon the Georgia Music Hall of Fame Collection, which came to UGA in 2011 after the closure of the Georgia Music Hall of Fame and Museum in Macon. Using that collection as a cornerstone, the Hargrett Library, one of three special collections units at UGA, has spent the past decade growing its music holdings. The result is an array of performance costumes, instruments, concert posters and other ephemera that bring music history to life. A few recent acquisitions spotlighted in the exhibition include Todd Nance’s drum kit used in the band Widespread Panic and items from Bill Doss, Amy Hairston and Robert Schneider of the Elephant 6 Collective. 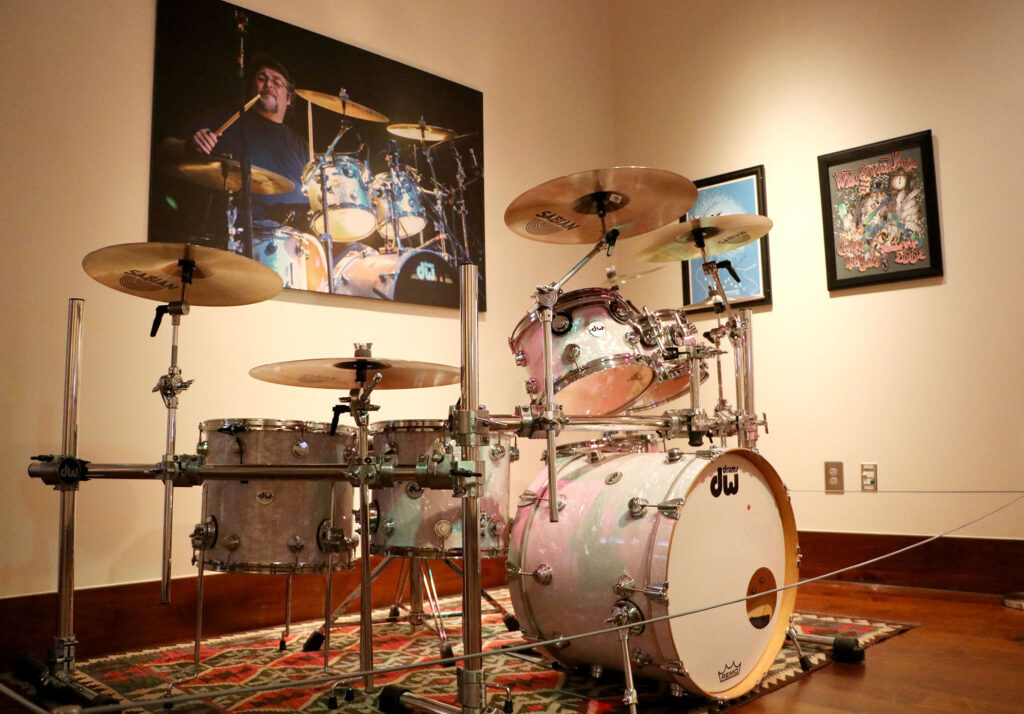 In addition, the exhibition features items on loan from Georgia music fans. “We sent out a call for community curators, asking people to loan items that told a story about music and them. We got photographs, posters, magazines, ticket stubs and autographed guitars,” said exhibition coordinator Jan Hebbard. “The contributions from local people have helped to fill in gaps in the collection and give the display a more personal feel.”

Lilburn resident Natalie Werve loaned her sneakers for the exhibition. The summer before her senior year at UGA, Werve took her fandom to another level, following a rock band on tour around the United States. She turned her pink Converse into a travel diary, noting the dates and locations of all 28 Silverchair concerts she attended, rounding out the experience with signatures from the band members.

“At all these concerts, I would meet people and connect with them,” Werve said, adding that when she hears Silverchair, she not only thinks of her time on the road but also her time in Athens, volunteering with Nuci’s Space, working toward her music business and comparative literature degrees and her dreams of becoming a tour manager, although her career has shifted to business consulting. “Music was something I identified with, and it made me feel like people understood me. … I’m thrilled to share my shoes as part of this exhibit.”

“Georgia on My Mind: Finding Belonging in Music” will remain on display through Dec. 9. An opening reception on Aug. 18 will feature live performances in the gallery from jazz pianist James Weidman, guitarists Skip Taylor and John Culwell and hip hop artist Cassie Chantel. In addition, families are invited to engage with the materials at a Family Day planned for Aug. 13.

The galleries at the Special Collections Libraries, located on the University of Georgia campus in Athens, are open to visitors for free from 8 a.m. to 5 p.m. weekdays, with extended evening hours until 7 p.m. on Tuesdays and Thursdays. For more information or to schedule a tour, visit libs.uga.edu/scl.

Those interested in donating artifacts or ephemera that build upon the story of Georgia musicians and venues should email hargrett@uga.edu.