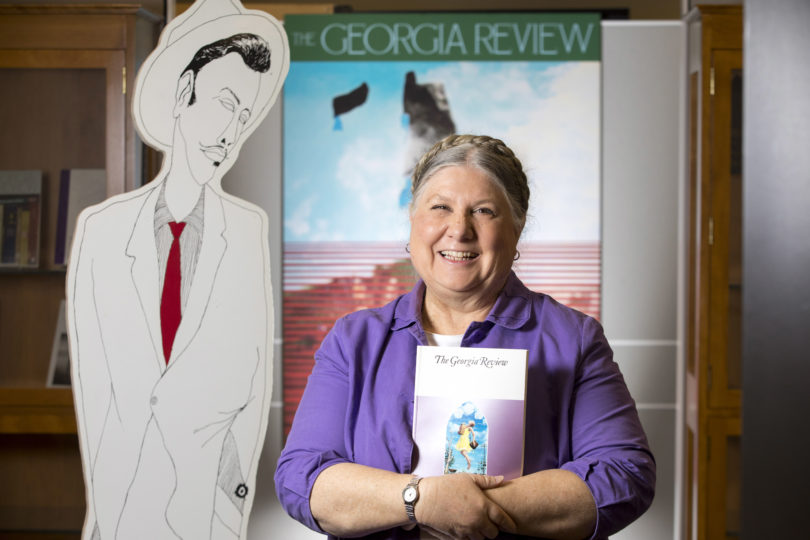 Brenda Keen will retire March 30 as business manager of The Georgia Review, just shy of her 30th anniversary at UGA. (Photo by Dorothy Kozlowski)

The longtime business manager of the University of Georgia’s quarterly literary journal is in the homestretch of her career at UGA. March 30, a few months shy of her 30th anniversary, will be Keen’s last day. 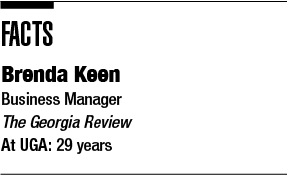 Keen’s career at UGA began in 1989, when she started working in the Carl Vinson Institute of Government. In 1999, she transitioned into her current role at The Georgia Review.

“I wear about 500 hats each day,” she said with a laugh. “I handle anything in the department that has to do with business.”

Throughout her time at UGA, Keen has been heavily involved with the university’s Staff Council.

“Staff Council is an advisory group to the president,” Keen said. “We take issues that are of concern to classified staff members and talk to the administration about them. I think it’s important for staff to have a voice inside UGA.”

While currently a representative from the Academic Affairs Staff Representative Group, Keen has held a variety of positions on the council, including secretary, coordinator and parliamentarian.

Keen also was elected president of the organization and served in that role for one term. One of the accomplishments of which she is most proud from her term as president was the appointment of Bob Ratajczak to the parking committee that helped staff members get first access to lower-cost parking spaces.

“I was very gratified that people would trust me in that position,” she said.

Currently, Keen serves on the Staff Council’s Executive Committee, which meets with UGA President Jere W. Morehead once a year. The council, in partnership with the Staff Representative Group in the Division of Finance & Administration, is in the midst of planning a Staff Resources Fair. The event will highlight some of the perks UGA employees have access to but might not know about. Keen said the fair will take place March 14 from 2-6 p.m. in the Grand Ballroom of the Tate Student Center.

During her free time, Keen is heavily involved in the Winterville community. She has lived in the small city outside Athens since 1999 and holds many positions within the community. In fact, the reason she’s retiring is so she can focus more on her civic involvement.

In November, Keen was elected to the Winterville City Council, a position she will hold for four years.

“I wanted to have more input in my town,” she said. “The people with the votes are the ones that get to decide policies and expenditures. So, I put my name in the running and got elected.”

The city’s government is comprised of four council members and the town’s mayor, Dodd Ferrelle.

“It really is a charming small town,” she said.

Keen suspects that all her civic obligations will keep her busy during retirement.

“I really love being able to socialize with the amazing people who live in Winterville,” Keen said. “It’s fun working for that community, and I think civic engagement is very important.”