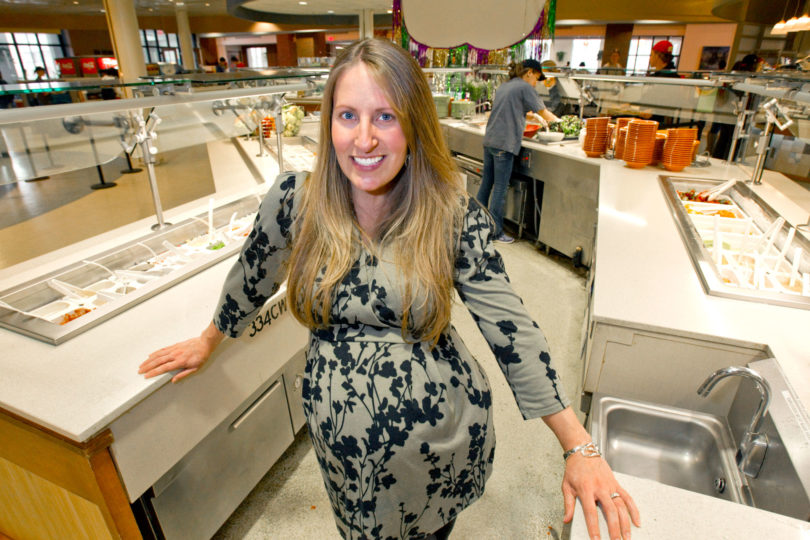 Despite growing up in a household that had a constant supply of ice cream in the freezer, Katherine Ingerson knew at 16 that she wanted to work in nutrition.

“When I was 16 and I found out I could have a career doing things with nutrition, I was pretty excited,” said Ingerson, now a registered dietitian in Food Services administration.

The Florida native now works with students to promote a healthy lifestyle.

“Growing up, my parents did teach me that we could have everything, but moderation and control were key,” Ingerson said. “And as a registered dietitian that’s what I teach now. “

Ingerson works with students to accommodate or change their eating habits. Whether it’s a student with a dietary restriction or a freshman trying to work off those dreaded 15 pounds, Ingerson shares her knowledge and expertise through health fairs, nutrition and wellness classes and even private nutrition counseling.

“College students are so enthusiastic about learning to eat well,” Ingerson said. “It’s really amazing to see the variety of backgrounds they come from. Some will come to me and say ‘I’ve never seen so many fresh fruits and vegetables in my life,’ and others will say ‘I know I need to eat healthy, but can you tell me a bit about the vegetables (at the dining hall).’ “

Ingerson works closely with about nine other dietitians on campus to promote living a balanced life.

“I have a really supportive environment,” Ingerson said. “I love the collaboration across campus with other dietitians. It’s been a lot of fun.”

Ingerson’s interest in nutrition originally was piqued as a child when she was a gymnast.

“When I was about 10 years old, I started seeing how some of the older girls, who were eating junk food after school, would get sick at practice,” she recalled. “That kind of made me notice what food can do to a body.”

“We always ate a sit-down family meal every night, and my mom made healthy lunches for school until we got to be old enough,” she said. “Then she taught us how to prepare our lunch and make it healthy and balanced.”

Caring for the vegetables caused Ingerson and her three siblings to enjoy eating the peas, beans, tomatoes, squash, corn, okra and lettuce they grew.

While her parents focused on fruits and vegetables, no unhealthy items were ever banned in the household.

“We had sodas only on special occasions, but nothing was ever banned,” Ingerson said. “We even spent Sundays making desserts, which some times were healthy, and other times rich, decadent and not (healthy).”

Learning about moderation and balance in her childhood has helped with her work today, Ingerson said.

“When someone comes to me and says ‘I haven’t had a cookie in five years,’ and expects me to be proud, I’m not; I’m worried, and I’ll want to know why, because it’s all about balance,” Ingerson said. “It’s not that you can’t have a dessert or something special, it’s how often you have it, and if you’re having it twice every day, then there’s a problem.”