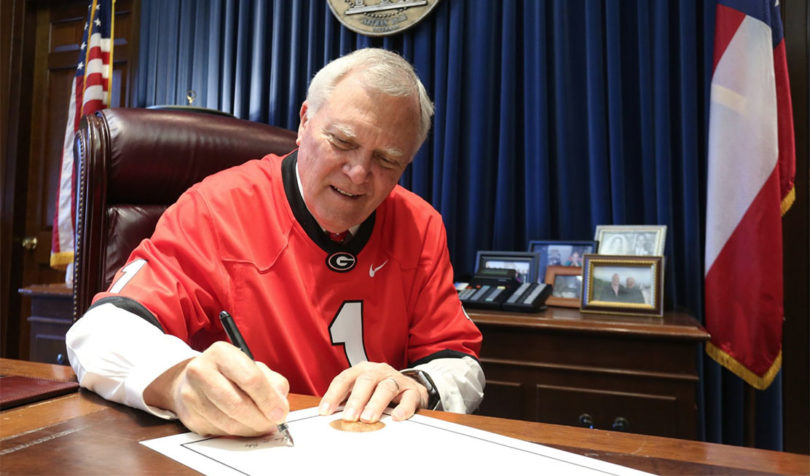 Gov. Nathan Deal signs the proclamation of UGA Football Friday and encourages everyone in the state to wear Bulldog red and black attire on Friday.

WHEREAS: On Monday, January 8, our Georgia Bulldogs will take on the Alabama Crimson Tide for the College Football National Championship at the Mercedes-Benz Stadium in Atlanta; and

WHEREAS: Following this historic season under the leadership of former All-SEC Georgia defensive back and current coach Kirby Smart, I hope to join UGA alumni, students, and fans across the nation to celebrate UGA’s first National Championship since the 1981 Sugar Bowl. This season has been most memorable, with UGA punching a ticket home after a win in double overtime against Oklahoma, perhaps the most exciting football game ever played; and

WHEREAS: This season, UGA fans have travelled far and wide to “see the Dawgs play” as they filled up Notre Dame Stadium in Indiana, took over Everbank Field in Jacksonville, overwhelmed Auburn at the Mercedes-Benz Stadium in the SEC Championship, and turned the City of Pasadena and the Rose Bowl Stadium red; and

WHEREAS: Led by 31 seniors, including Nick Chubb and Sony Michel – the most prolific running back duo in FBS history, Lorenzo Carter – who forever earned a place in UGA lore by blocking a field goal attempt in the second overtime of the Rose Bowl, Davin Bellamy – who forced turnovers at some of the season’s most pivotal moments, as well as Dominick Sanders – UGA’s co-record holder for interceptions, the Dawgs are ready to make history for the university and the State of Georgia; and

WHEREAS: With the nation’s best linebacker – Roquan Smith – anchoring this tough SEC defense, Jake Fromm – a Warner Robins native who impressed us all – leading a potent offense, and Rodrigo Blankenship – who now holds the record for the longest field goal in Rose Bowl history, the Dawgs will be called to, in the timeless words of Larry Munson, “Hunker it down one more time;” and

WHEREAS: There is just a little more wood to chop in this special season. I, therefore, call upon UGA fans in every corner of the state and those living across our nation and around the world to join me in cheering on the Dawgs as they once again take the field to kick off the 2018 College Football National Championship; now

WHEREAS: I, NATHAN DEAL, Governor of the State of Georgia, do hereby proclaim January 5, 2018, as UGA FOOTBALL FRIDAY in Georgia and encourage all 103,706 employees and UGA fans across our state to dress accordingly in red and black attire.

In witness thereof, I have hereunto set my hand and caused the Seal of the Executive Department to be affixed this 4th day of January in the year of our Lord two thousand eighteen.