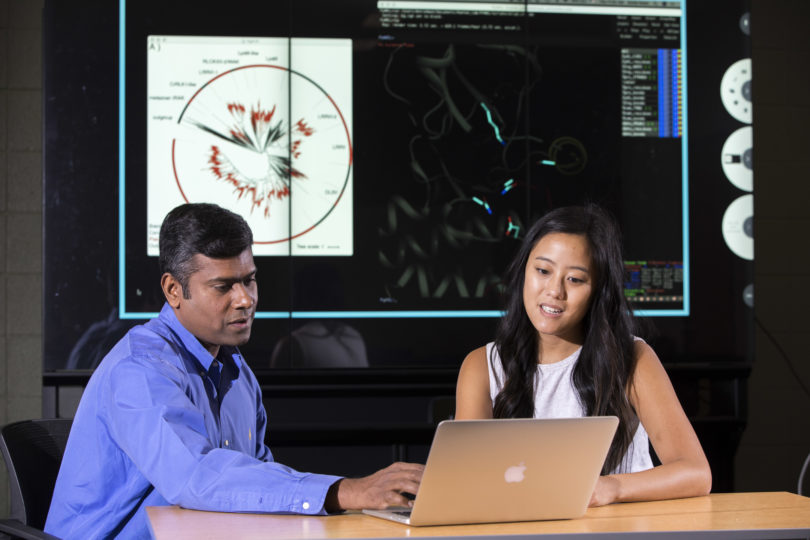 April was a big month for Annie Kwon. The Ph.D. student in bioinformatics successfully defended her dissertation, and she was listed as first author on a paper revealing that a class of enzymes previously thought to be useless is prevalent across all domains of life and in fact serves an important purpose in cell communications.

Kwon, working with UGA professor Natarajan Kannan and a team of researchers, conducted an extensive survey of these enzymes—known as pseudokinases—and revealed that they bring cell signaling partners together, helping them work more effectively.

The study, published in Science Signaling, evolved from Kwon’s research trip to the University of Liverpool, where she worked with Patrick Eyers, a longtime collaborator with the Kannan lab. Kwon was one of the first students to receive a fellowship through the UGA-University of Liverpool graduate exchange program, which funded her trip in April 2018.

The project grew out of conversations between Kannan and Eyers, the result of inter-institutional collaborations made possible through the UGA-University of Liverpool Pump-Priming Grant Program.

“Our study was the first to show that pseudokinases are prevalent across diverse species and are well represented in plants and fungi,” said Kannan, associate professor of biochemistry and molecular biology in the Franklin College of Arts and Sciences.

Protein kinases are a class of enzymes involved in a range of diseases, particularly in cancer. They turn signals on and off in cells—a critical part of how cells communicate with each other. Pseudokinases are related proteins that lack the machinery needed to generate on and off signaling, and for many years they were considered to be evolutionary leftovers and ignored.

The survey by Kwon, Kannan and other graduate students in Kannan’s lab compared the genomes of diverse organisms and showed for the first time that these so-called “dead” enzymes are prevalent across multiple species. Subsequent research by the UGA-University of Liverpool team and others has further revealed that pseudokinases play important roles by bringing other signaling partners together in a cellular context. Even though pseudokinases themselves don’t provide on/off signaling, they help other enzymes work more effectively.

Pseudokinases in plants, fungi and bacteria have not received much attention, and Kannan believes there is enormous potential for drug discovery and biotechnology. For example, some have been shown to play a part in plant immunity and stress, a function that could be repurposed for biotechnology applications. He plans to explore how to target pseudokinases in plants and fungi and understand their functions, and he hopes to find UGA collaborators.

“UGA is a world leader in plant research, and there’s a large number of people working on fungal systems,” Kannan said. “There might be someone across campus who would find this information very valuable.”

Kwon, who graduated in May, is wrapping up research projects and applying for jobs. Her ideal position would be in drug discovery at a pharmaceutical company, and her experience with kinases and pseudokinases in the Kannan lab provides a strong foundation.

“There are a lot of interesting biological questions that are coming out of this field, especially from our study,” she said. “We see this research branching off in so many different ways, from drug studies to plant studies to figuring out more about how bacteria work.”