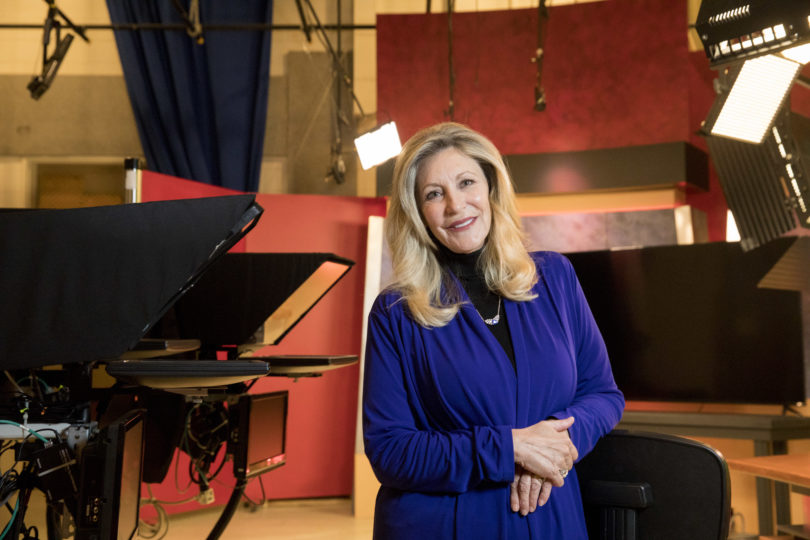 Dodie Cantrell-Bickley co-produces Newsource, a half-hour newscast that has been part of Grady College for nearly 30 years. (Photo by Dorothy Kozlowski) 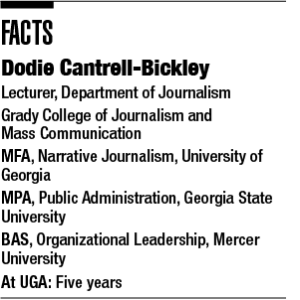 Leaving retirement to start a new career teaching was not an easy choice, but Dodie Cantrell-Bickley views her most recent job as an investment.

“When it’s time, I don’t want to have that fleeting thought about ‘Did I invest my life or did I just spend it’?” she said. “Being part of the Grady faculty and helping turn out tomorrow’s great journalists feels like a great return on that investment.”

Cantrell-Bickley was lured out retirement when David Hazinski, co-instructor and former NBC correspondent, reached out to her and pitched the idea.

“I had been a fan of Hazinski and the Grady program for many years,” Cantrell-Bickley said. “In fact, I visited the classes in the past and hired great Grady grads.”

Today, she co-produces Newsource, a half-hour newscast that is broadcast four times weekly when school is in session.

For the 30 or so students who take Newsource as their capstone class, the daily newscast is a semester-long marathon of searching for stories, scouring facts, conducting interviews, packaging stories and producing the show. In addition, there are dozens of student volunteers who work behind the scenes for each broadcast. At the heart of this stress and chaos is Cantrell-Bickley making links to what they already have learned.

“Newsource is where you put everything you have learned in the classroom at Grady into action,” she said.

Newsource, a program that has been part of Grady College for nearly 30 years, is the epitome of experiential learning and Cantrell-Bickley’s more than 30 years in the industry has positioned her well to teach her students about the newsroom. Cantrell-Bickley has served as an anchor, an investigative reporter, an executive producer, a news director and a president/general manager, serving much of her time at WMAZ-TV in Macon as well as WTLV/WJXX in Jacksonville.

Cantrell-Bickley and Hazinski work hard to make the class as realistic as possible in relation to what their students will experience in broadcast journalism when they graduate. Part of that process is a critique that is publicly broadcast at the end of every show. Seldom does Cantrell-Bickley sugar-coat her feedback.

“Hazinski set the standard for critiques so that our students could trust the feedback they receive and grow from it,” she said. “Honesty and candor are a must.”

In addition to technical and editorial skills, Cantrell-Bickley is committed to teaching her students how to succeed in a field that is bombarded with unverified information masquerading as journalism on some social media, accusations of  fake news and an incredible amount of competition to be heard.

“Great journalism is about facts,” she said. “Getting information and making sure it is accurate is critical; producing the story in a way that is engaging and easy to understand is vital.”

She shares her passion for journalism with them along the way.

“We serve the public by acquiring and disseminating news and information that will help the public make more completely informed decisions about their lives,” she said.

Like any good news director, Cantrell-Bickley is available to her students 24 hours a day via phone or text. Her students don’t hesitate to call if there is a breaking news story. She also receives group texts throughout the day as the students prepare the show.

Her phone signals an incoming text as she leaves the interview. The students are discussing that day’s show.