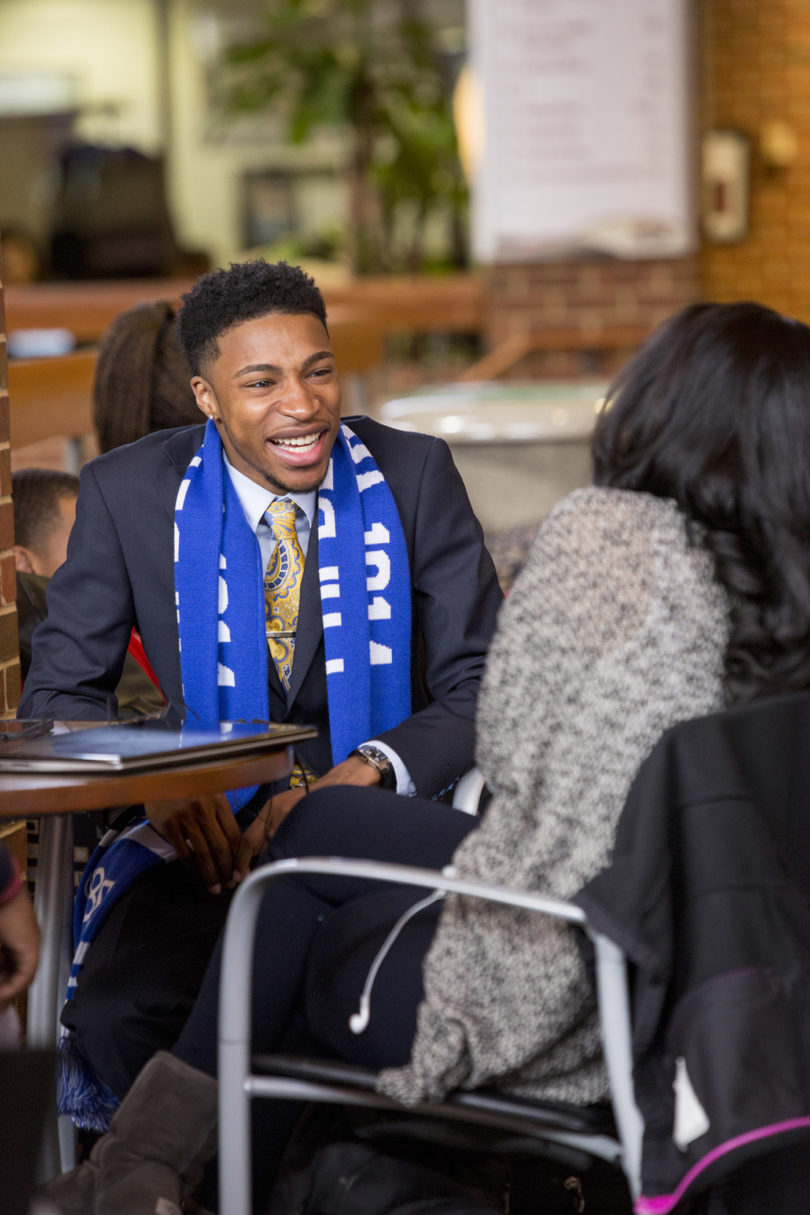 Darren Anglin is a busy man. The senior advertising major holds leadership positions in five campus organizations and has worked part time as a student advocate for University Housing throughout college. He’s also made a commitment to mentoring students.

It’s a commitment that comes from the knowledge that others already have paved a path for him to succeed.

“You have been paid for,” Anglin said, paraphrasing a Maya Angelou quote. “So you have to pay for people coming after you.”

UGA provides him with that opportunity to give back, he said.

In January, Anglin was awarded the President’s Fulfilling the Dream Award at the 13th annual Martin Luther King Jr. Freedom Breakfast for his community service and efforts to embody and promote King’s vision of unity. For Anglin, representing King’s dream is all about having the courage to stand for his own convictions while providing support to those who might not be able to stand alone yet.

Anglin said his commitment to service comes naturally. It’s a part of him that dovetails with his perseverance and individuality.

He mentors other UGA students through the Black Educational Support Team and does the same off-campus through the Sigma Beta Club. He also serves as vice president for the Zeta Nu chapter of Phi Beta Sigma fraternity and vice president of finance for the National Pan Hellenic Council.

Anglin admits that it is a challenge to handle his school, work and service, but he said UGA has fostered his resilience and taught him that it’s not a question of if, but how, he will lead. Anglin said his drive to lead stems from his deeply held convictions that diversity and inclusion are important community ideals.

King’s courage to effect change is what inspires Anglin.

“The dream is coming alive every day,” he said.

Anglin, who also is working on a minor in consumer economics and communications, wants to foster the sort of world that he wants to live in, the kind of world King and others paved the road for.

Anglin believes the best way to convey his ideals is through action.

“I can’t just tell (my mentees) to do x,y and z and be great—it’s not that easy,” he said. “Your colors shine when you are challenged and have to make a conscious decision to be who you are.”

As a BEST mentor and an advocate for the LGBT community, he works to inspire students to accept themselves and their identity, even if others haven’t yet.

Anglin is quick to acknowledge the foundation from which he stands, both familial and social. The people he relies on when the pressures of school and leadership seem unbearable—his mother and friends—give him the resolve to continue, he said.

Although there is also evidence of his busy life.

“You should see my room right now,” he joked. But seeing others succeed “makes the long nights worth it.”