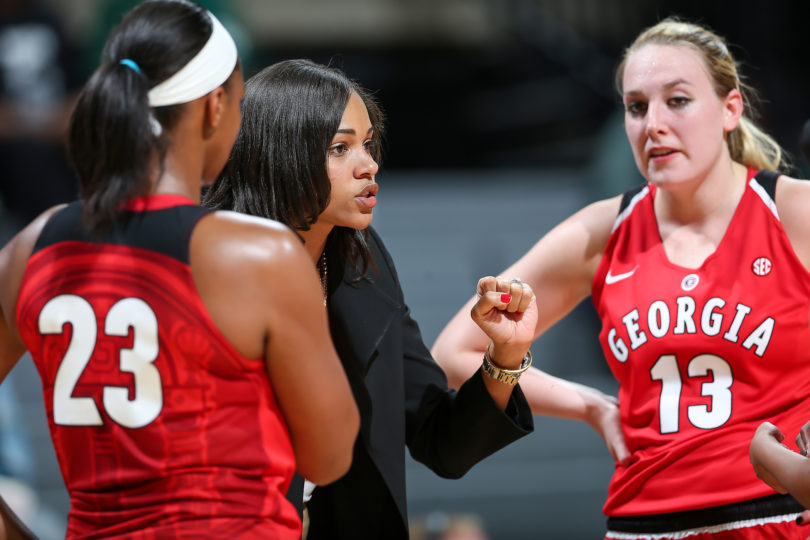 For Joni Taylor, the UGA women’s basketball head coach, success isn’t only measured by games won. It also includes what happens off the court. Ultimately, Taylor defines her success by the mentorship she gives her student-athletes.

“My vision is to help impact the lives of young women in a positive manner, and basketball is my tool to do that,” she said.

No doubt, Taylor’s competitive spirit drives her to build on the basketball team’s winning tradition. Taylor has 13 seasons of coaching experience at the Division I level, the last seven in the Southeastern Conference. The Meridian, Mississippi, native joined the UGA staff in 2011 and spent one season as an assistant coach before being promoted to associate head coach. Throughout her career, Taylor has displayed the ability to sign premier prospects and then help those recruits develop into highly successful players.

“Her appreciation for the total development of young women is second to none and her past experiences have prepared her for the challenges ahead,” said Andy Landers, who retired as head coach at the end of last season.

To develop successful student-athletes, Taylor said there must be focus on areas beyond hoops.

“We want to win and play at the highest level, but while we’re doing that, we have a great opportunity to be role models and continue to shape the lives of these young women whether it’s through community service, speaking engagements with media or in the community,” she said. “We try to give them opportunities—so when they graduate, they’re not just basketball players, they are also well-rounded student-athletes.”

Part of Taylor’s commitment to her players’ development comes from her upbringing, in which she was raised in a household of educators. Her father was a high school social studies teacher; her mother, a biology teacher who went on to become an administrator in the school system. Her older brother became a history teacher. Taylor said that genealogy put pressure on her to succeed in a variety of areas of her life. And she delivered.

She played basketball at the University of Alabama, where she was named to the SEC’s Community Service team for women’s basketball in 1999, 2000 and 2001.

She received her bachelor’s degree in secondary education planning to follow in the footsteps of her parents. Instead, an opportunity to serve as a student assistant for Alabama men’s basketball team got her interested in coaching at the collegiate level. That path of coaching has led to great success, but she’s maintained the heart of an educator.

Now as head coach, Taylor is working to sustain the team’s outstanding record of academic success and increase its work in the community.

Last month, just before the holidays, the team helped build bicycles for Athens-area children in need, and she intends to find more opportunities like this for the basketball team.

But overall, Taylor stresses that team members are students before athletes.

“Academics is No. 1,” she said. “Our student-athletes know that they have a very tough schedule. They are asked to do a lot between the classroom, workouts and community service. They don’t have a lot of time, but they understand one place where time is not going to get cut is with academics.”