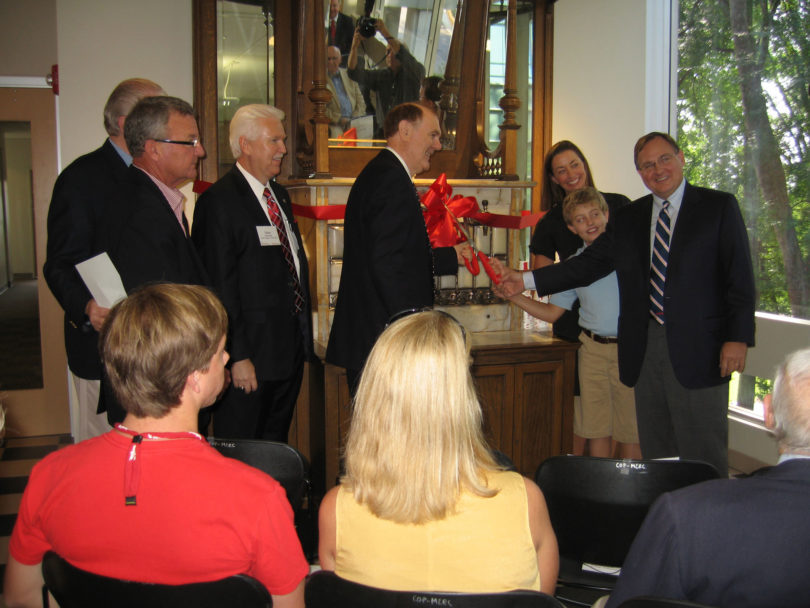 Participating in the ribbon cutting ceremony were (from right) Coca-Cola executives Bill Douglas; Laura Brightwell and her son

Soda fountains were a common sight in 1950s general stores, lunch counters and pharmacies-but now the College of Pharmacy has its own operational soda fountain thanks to a recent donation by Coca-Cola Enterprises of Atlanta.

The historic soda fountain, measuring more than 10 feet wide by 10 feet tall, features a mirrored frame, marble counter tops and a marble dispensing unit; 13 silver dispensers with flavorings ranging from sarsaparilla, strawberry and vanilla to Coca-Cola, once mixed the syrups with soda or ginger to make a carbonated drink.

Valued at $15,000, the soda fountain was manufactured by the Liquid Carbonic Co. in 1907 and was operated for many years at the Brightwell stores in Maxeys before eventually being moved to Coca-Cola Enterprises in Atlanta.

Laura Brightwell, vice president of public affairs and communications at Coca-Cola Enterprises, is a direct descendent of the Brightwell family. She helped officiate the ribbon-cutting ceremony for the soda fountain in the college’s new alumni suite and related what her grandmother had told her about the history of the soda fountain.

Two Brightwell brothers owned stores side-by-side in Maxeys, she said, and jointly operated the soda fountain. When the stores closed, the soda fountain was sold to a bottling company in Montgomery, Ala.

In 1997 Coca-Cola bought the bottling business and also took possession of the soda fountain, which had been stored in a warehouse. Its new owner moved it into the offices of Coke’s CEO in Atlanta where it remained until the CEO’s retirement in 2005.

“It’s a great family history,” said Brightwell, “and we’re proud to be able to donate the soda fountain to the College of Pharmacy, especially considering the historic connection between Coca-Cola and pharmacy.”

The original formula for Coca-Cola was developed in 1886 as a medicinal aid by Atlanta pharmacist John Pemberton. Coca-Cola was first dispensed as a fountain drink in the drug store of Joe Jacobs of Atlanta and gained popularity through the marketing and advertising expertise of pharmacist Asa Candler, also of Atlanta.

“It is fitting that this historic soda fountain was manufactured in 1907, the same year that pharmacy students first entered the pharmacy school and the year that our first full-time dean, Robert C. Wilson, was hired,” said Svein Øie, dean of the pharmacy college.