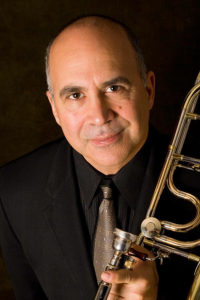 The University of Georgia Hodgson Wind Ensemble will be mixing it up with a Sunday performance on Nov. 17 at 3 p.m. in Hodgson Hall. Joining them as a guest artist is Joe Alessi, principal trombonist for the New York Philharmonic.

“He is undoubtedly one of the very finest trombonists in the world and has shaped the American style of orchestral performance for the past 35 years as he has expanded the solo repertoire for the instrument. His numerous solo recordings and live performances have almost single-handedly elevated the possibilities and expectations of the instrument,” said Josh Bynum, associate professor of trombone in the UGA
Hodgson School of Music.

The program opens with Aaron Copland’s “Outdoor Overture,” a musical romp by one of America’s greatest and most beloved composers. “Time for Outrage” by Marco Putz powerfully explores the composer’s anguish at how humans treat the Earth. Finally, the program moves beyond this planet to “Music of the Spheres” by Philip Sparke, an exciting and colorful journey from the Big Bang to beyond.

In creating the program, Cynthia Johnston Turner, director of bands, imagined the concert in terms of “Earth, wind, fire and beyond.” The ensemble will be performing the Georgia premiere of “Quaternity” by Bruce Broughton, most famous for his film scores, which musically explores the four elements. Alessi will join them for this piece, which was a commission from a consortium that included UGA’s Hodgson Wind Ensemble.

“[Alessi] is simply a world-class trombonist. As the principal trombone of the New York Philharmonic, he is considered to be one of the finest trombone performers and educators in the world today. We warmly welcome his rehearsing with our groups, teaching lessons and, most important, interacting with our students and faculty,” said Philip A. Smith, the William F. & Pamela P. Prokasy Professor in the Arts, a long-time friend of both Alessi and Broughton.

Tickets for the concert are $12 for adults and $3 for students. They can be purchased by calling 706-542-4400, online at pac.uga.edu or in person at the box office prior to the concert.

In addition to performing with the Hodgson Wind Ensemble, Alessi will be performing with the UGA British Brass Band that same evening at 7 p.m. and will be featured in Philip Sparke’s “Sambezi” and Glen Daum’s arrangement of “Have Yourself a Merry Little Christmas.” The 7 p.m. concert will take place at 1690 S. Milledge Ave. in Athens.

“Both concerts will be a thrill and ought not be missed,” said Smith.

Presented by the University of Georgia Arts Council, Spotlight on the Arts is scheduled through Nov. 17 and includes dozens of exhibitions and performances in the visual, literary and performing arts. Many of the events are free or discounted for UGA students, and the annual Spotlight on the Arts Family Day will be presented free of charge Nov. 16.

More information on the 2019 Spotlight on the Arts festival, including a schedule of events, can be found at arts.uga.edu as well as on the Arts Council Facebook page (facebook.com/UGAarts), Twitter feed (@UGA_arts) or Instagram (instagram.com/uga_arts).