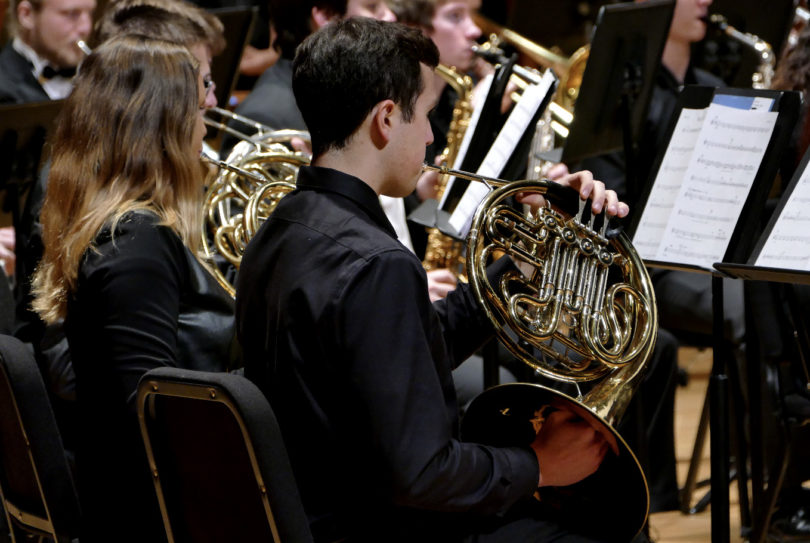 The next Hodgson Wind Ensemble performance on Oct. 24 will include suites from around the world.

UGA Director of Bands Cynthia Johnston Turner will conduct the Hodgson Wind Ensemble in the program “Toot Suites!” on Oct. 24 at 7:30 p.m. as part of the Hugh Hodgson School of Music Thursday Scholarship Series.

The ensemble will play a range of music including suites from the Renaissance, the Romantic and the Modern eras and suites from around the world by Sussato, Massenet and Waespi, plus Eric Whitacre’s “October.”

“Even though you may not know about Oliver Waespi, you might just leave saying, that was my favorite,” said Johnston Turner.

A concerto for wind ensemble, she describes the piece as a “swashbuckling adventure.” “The Danserye” by Sussato is a suite of dances based on pop tunes of the 15th century, or rather Renaissance hits. The suite of ballet music from “Le Cid” by Jules Massenet is music that most people will recognize and think, “Oh, that’s where that’s from,” Johnston Turner said.

For its encore, the ensemble will perform “Mother of a Revolution” by Omar Thomas written for one of the leaders of the LGBTQ liberation movement. Thomas will be the guest composer for the ensemble’s April 16 concert.

On Oct. 28, the Hodgson Wind Ensemble will be performing the same program in two Georgia prisons.

“We have chosen music that we hope will bring everyone a little beauty and a little joy,” Johnston Turner said.

Tickets for the Thursday Scholarship Series are $20 for adults and $3 for students and children. They can be purchased through the Performing Arts Center box office at 706-542-4400, pac.uga.edu or in person. The concert will take place in Hodgson Hall. All proceeds directly fund student scholarships, and the series continues the tradition started by the music school’s namesake in 1980.