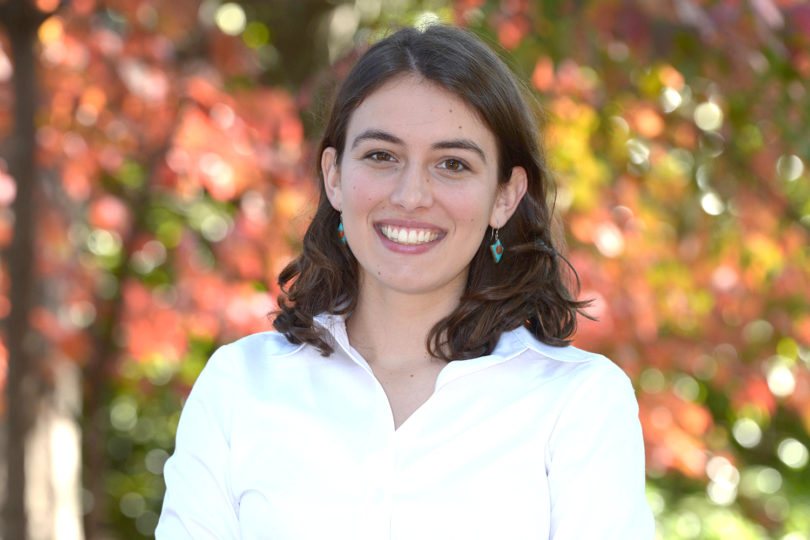 Laura Courchesne’s work throughout her three-plus years at UGA paid incredible dividends Nov. 19 as she became one of 32 students in the U.S. to be named a Rhodes Scholar, receiving the oldest and most celebrated international fellowship award in the world.

Courchesne, an Honors Program student and Foundation Fellow from Fair Haven, New Jersey, is majoring in economics and religion in the Terry College of Business and the Franklin College of Arts and Sciences, respectively. Her studies focus on the emerging field of behavioral approaches to conflict; her primary research interest is the link between nonstate armed groups and civilian populations.

She is the 24th UGA student to be awarded a Rhodes Scholarship. Recipients are nominated by their colleges and universities and are selected through a process spanning the 50 states, the District of Columbia and the U.S. territories. The 2017 scholars will begin their courses of study at the University of Oxford in October.

“The University of Georgia is very proud of Laura for earning this most prestigious scholarship,” said UGA President Jere W. Morehead. “Her outstanding record at the university made this award possible, and her research interests have the potential to impact the world around us. I look forward to all that she will continue to accomplish as a UGA alumna and Rhodes Scholar.”

For Courchesne, her move to Oxford to pursue master’s degrees in social anthropology and politics research will extend the relationships she’s already built at that institution. She previously attended Oxford during its Trinity Term in 2014 and 2015 and conducted research with the Institute of Cognitive and Evolutionary Anthropology. This past June, she completed Oxford’s executive leadership course on the changing character of armed conflict.

Currently, she’s working as a research assistant under the supervision of Oxford’s Annette Idler examining illicit economies, militant groups and local populations at the borders between Afghanistan and Pakistan and between the Democratic Republic of the Congo and Uganda. She also has been invited to join a team at Oxford’s Changing Character of War Programme to conduct a four-year project on military transformation, consulting with the Colombian army on dealing with nonstate armed groups.

Adding to her list of current endeavors, she’s also a research assistant for the Empirical Studies of Conflict Project at Princeton University and a research analyst for the International Committee of the Red Cross’ Unit for Relations with Arms Carriers. At UGA, she’s working with Jeffrey Berejikian in the School of Public and International Affairs studying psychological ramifications of drone strikes on noncombatant populations.

Courchesne has conducted research in Bali, Indonesia; Binghamton, New York; Lausanne, Switzerland; the U.S. Army War College in Carlisle, Pennsylvania; and the Carter Center’s Americas Program in Atlanta. In addition to being a Foundation Fellow, she is a Leonard Leadership Scholar and UGA Presidential Scholar; received a research assistantship through UGA’s Center for Undergraduate Research Opportunities, or CURO; is a member of Phi Beta Kappa Honor Society, Palladia Women’s Honor Society and Blue Key Honor Society; and has earned CURO graduation distinction.

She was an Honors teaching assistant at UGA and is an editor for the UGA Journal for Undergraduate Research Opportunities and on the board of trustees for the Jonathan D. Rosen Family Charitable Foundation.

“Beyond having an incredible intellect, Laura also has profound empathy,” said David S. Williams, associate provost and director of UGA’s Honors Program, and the UGA faculty representative for the Rhodes Scholarship. “Rhodes Scholars are not just smart—they make the world better. Laura is dedicated to that being her life’s work.”

A new U.S. Rhodes Scholar class is selected each year on the Saturday preceding the Thanksgiving holiday. Scholars are chosen not only for their outstanding scholarly achievements, according to the organization, but also for their character, commitment to others and the common good, and for their potential for leadership.

Other recent Rhodes Scholarship recipients from UGA include Juliet Elizabeth Allan in 2013, Tracy Yang in 2011, and Deep Shah and Kate Vyborny in 2008.