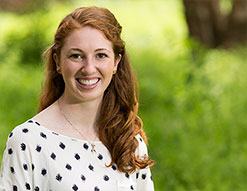 UGA Honors student Torre Lavelle is one of 111 students from around the world to be named to the inaugural class of Schwarzman Scholars, a highly selective and fully-funded one-year master’s program at Tsinghua University in Beijing.

More than 3,000 applicants from 135 countries applied for the Schwarzman Scholars program, making it one of the most selective in the world.

“Torre Lavelle richly deserves the honor of being named to a program designed to prepare the next generation of global leaders,” said Jessica Hunt, major scholarships coordinator in the Honors Program. “As a future conservation policymaker, Torre has demonstrated a commitment to environmental stewardship within local, national and international communities.”

Lavelle is a Foundation Fellowship recipient who is pursing a bachelor’s degree in ecology from the Odum School of Ecology as well as an Honors interdisciplinary degree in political ecology from the Franklin College of Arts and Sciences.

“The chance to deepen my understanding of environmental and public policy through the Schwarzman Scholars program in Beijing, at the heart of such a complex geopolitical atmosphere, will be truly fascinating,” Lavelle said. “I am thrilled to explore the region, and I am beyond grateful to my family, friends, the University of Georgia, the Foundation Fellowship and my high school community of Mount de Sales Academy.”

Lavelle, who was named a Udall Scholar last spring, has engaged in a number of hands-on learning experiences on campus and around the world. She studied conservation and ecotourism in Fiji and Tanzania and also studied literature through the UGA at Oxford program.

She interned in Thailand at the Freeland Foundation and at the Smithsonian Conservation Biology Institute in Virginia. Lavelle currently is interning at the U.S. Department of State, and earlier this year was one of six students nationwide invited to present a policy paper at the White House.

Blackstone co-founder Stephen A. Schwarzman personally contributed $100 million to the program and is leading a fundraising campaign to raise an additional $300 million from private sources to endow the program in perpetuity. Tsinghua University is one of China’s most prestigious universities, and Schwarzman Scholars will live and study together on the campus of Schwarzman College, a newly-built, state-of-the-art facility.