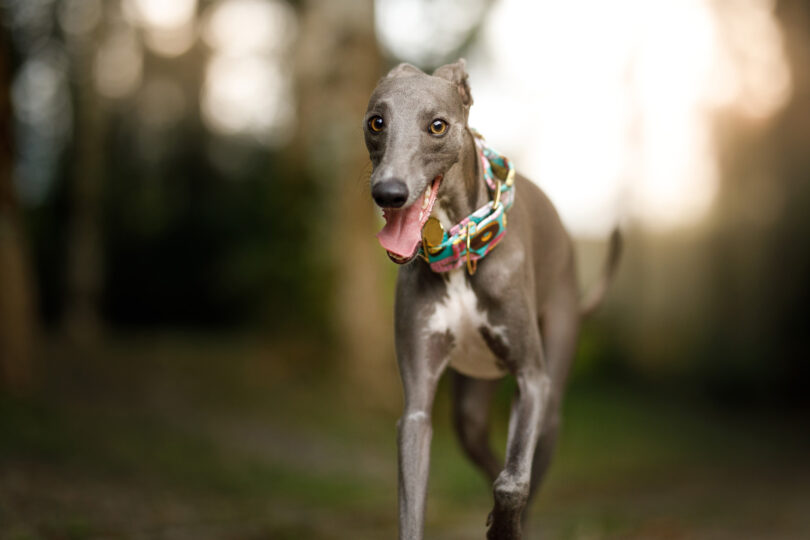 One possible breeding ground for a potential drug-resistant hookworm outbreak is also the place many dog owners use to exercise their animals: dog parks. (Getty Images)

Hookworms are one of the most common parasites plaguing the companion animal world.

They use their hooklike mouths to latch onto an animal’s intestines, where they feast on tissue fluids and blood. Infected animals can experience dramatic weight loss, bloody stool, anemia and lethargy, among other issues.

Now they’ve become multiple-drug resistant, according to new research from the University of Georgia.

Right now, U.S. veterinarians rely on three types of drugs to kill the hookworms, but the parasites appear to becoming resistant to all of them. Researchers from the UGA College of Veterinary Medicine first reported this concerning development in 2019, and new research, published recently in the International Journal for Parasitology: Drugs and Drug Resistance, provides deeper insight into where the problem started and how bad it’s since become.

For the present study, the researchers focused on current and former racing greyhounds. Dog racetracks are particularly conducive to spreading the parasite due to the sandy ground of the facilities, an ideal breeding ground for hookworms. Because of the conditions, all the dogs are dewormed about every three to four weeks.

After analyzing fecal samples from greyhound adoption kennels, three veterinary practices that work with adoption groups and an active racing kennel, the researchers found the parasites were highly prevalent in the breed. Four out of every five greyhounds tested came up positive for hookworms. And the ones that tested negative are probably also infected, said Ray Kaplan, the study’s corresponding author and a former professor of veterinary parasitology at UGA.

Hookworms can sometimes “hide” in tissues, where they won’t reproduce and shed eggs until the infection worsens and leaks into the dog’s intestines.

But perhaps more alarming, the team saw that the dogs still had high levels of infection with hookworms even after they were treated for them.

The study marks the first demonstration of widespread multiple-drug resistance in a dog parasite reported in the world.

In situations where there are a lot of dogs infected with a lot of parasites, such as on racing dog breeding farms and kennels, there are many more opportunities for parasites to develop rare mutations allowing them to survive the dewormer treatments. If dewormers are applied frequently, the newly emerging resistant worms will survive and pass on the mutation that helped them sneak past the drug to their offspring.

With repeated treatments over time, most of the drug-susceptible worms at the farm or kennel will be killed, and the resistant worms will then predominate.

Compounding the problem, veterinarians don’t typically test animals after treatment to ensure the worms are gone, so the drug-resistant worms go unnoticed until the dog has a heavy infection and starts showing signs of hookworm disease.

Personally, I would not take my dog to a dog park.If your dog picks up these resistant hookworms, it’s not as easy as just treating them with medication anymore.” — Ray Kaplan, professor of veterinary parasitology

The researchers found that almost all the fecal samples tested positive for the mutation that enables hookworms to survive treatment with benzimidazoles, a broad-spectrum class of dewormers used in both animals and humans. Although a molecular test does not yet exist to test for the resistance to the other two types of drugs, other types of testing by the team showed that the hookworms were resistant to those drugs as well.

“There’s a very committed greyhound adoption industry because they are lovely dogs,” said Kaplan. “I used to own one. But as those dogs are adopted, the drug-resistant hookworms are going to show up in other pet dogs.”

One possible breeding ground for a potential drug-resistant hookworm outbreak is also the place many dog owners use to exercise their animals: dog parks.

“Personally, I would not take my dog to a dog park,” Kaplan said. “If your dog picks up these resistant hookworms, it’s not as easy as just treating them with medication anymore. Until new types of drugs are available, taking your dog to a dog park has to be considered a risky activity.”

Dogs don’t have to ingest the worms to become infected. Hookworm larvae live in the soil and can also burrow through the dog’s skin and paws. And female dogs can pass the parasite on to their puppies through their milk. 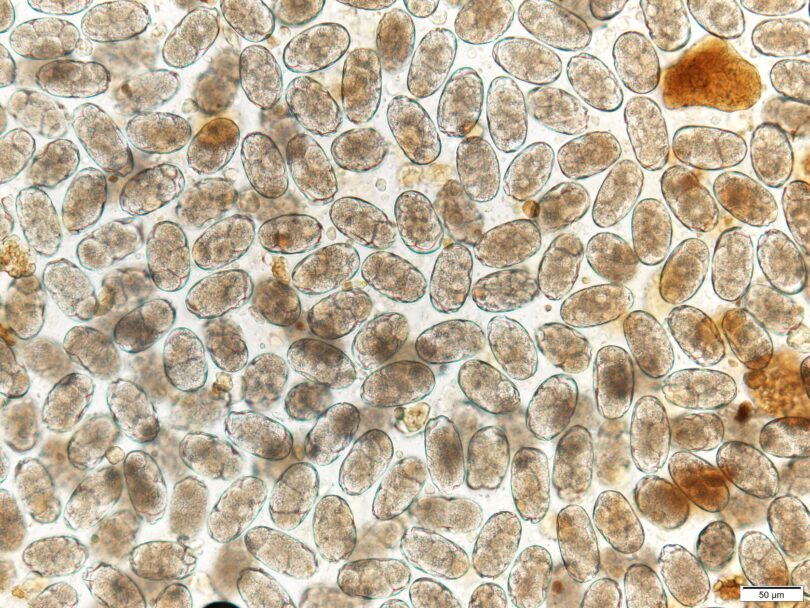 Hookworm eggs are seen under a microscope. (Submitted photo) 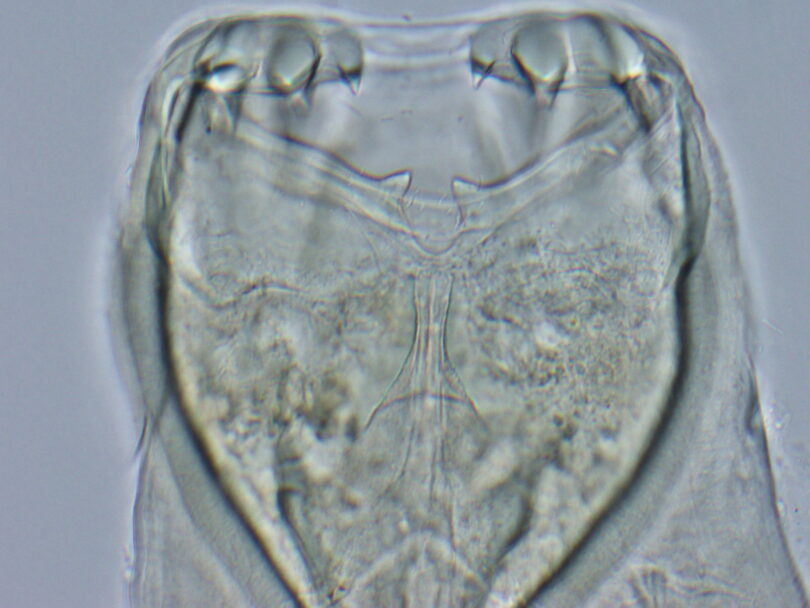 Hookworms get their name from their hook-shaped mouths shown here under a microscope. (Submitted photo) 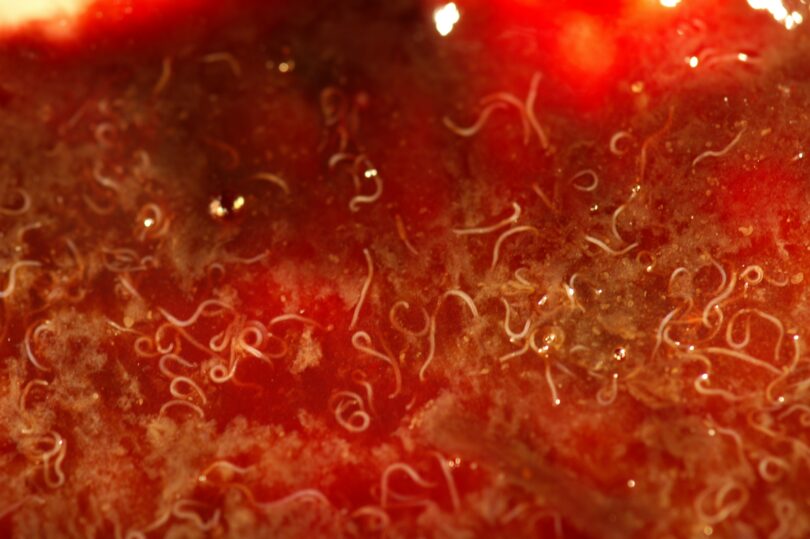 Hookworms are visible within the intestine of a deceased puppy. (Submitted photo)

The infection doesn’t manifest in the same way in people, but after the worms penetrate the skin, they cause a red, very itchy rash as they travel under the skin. As the number of drug-resistant worms grows, they’ll also pose a risk to humans.

Previously, doctors would treat patients with an ointment that contains a dewormer along with a corticosteroid. “Unfortunately, that’s not going to work against these drug-resistant hookworms,” Kaplan said.

Kaplan and Pablo Jimenez Castro, lead author of the study and a recent doctoral graduate from Kaplan’s lab, found in another recent study that these multiple-drug resistant dog hookworms do appear to be susceptible to emodepside, a dewormer currently only approved for use in cats in the U.S. But use of this cat drug on dogs should only be performed by a veterinarian, as it requires veterinary expertise and supervision.

Based in part on Castro’s work, the American Association of Veterinary Parasitologists recently formed a national task force to address the issue of drug resistance in canine hookworms.