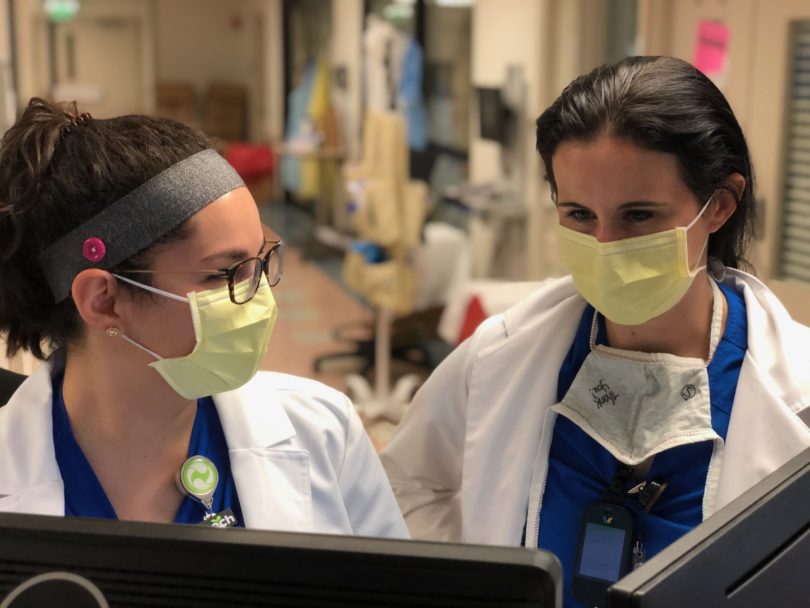 Tia Stitt, left, a UGA College of Pharmacy alumna and a Phoebe/UGA PGY1 resident, talks with Erin Waldee, who serves as an instructor for University of Georgia pharmacy students and residents at Phoebe Putney Memorial Hospital. (Submitted photo)

They find themselves in the middle of one of the state's hot spots.

She walks through the doors of the hospital just like she has for the past three years. But before she can start her shift as the critical care pharmacist team leader at Albany’s Phoebe Putney Memorial Hospital, she gets her temperature taken. Someone hands her a fabric mask, one she’ll have to give back for sterilization hours or so later when she leaves. Then she heads up to one of four intensive care units full of dozens of COVID-19 patients.

The Phoebe Putney Memorial Hospital, or Phoebe as it’s known locally, got hit early, hard and fast with the novel coronavirus and much to the medical community’s surprise. Two large funerals at the end of February drew visitors from bigger cities, and experts believe that’s how the virus hitched a ride to the small town. About a week later, the hospital saw its first COVID patient.

“I just couldn’t believe it. It felt like that was in Washington. That wasn’t happening here,” said Waldee, who serves as an instructor for University of Georgia pharmacy students and residents, in addition to having graduated from the Albany campus residency herself. “After that day, it pretty much just blew up. I don’t even know how long it’s been since then. Time has kind of gotten away from me.”

At first, the hospital just opened one COVID ICU. A couple of days later, it was two. Then three. Then four plus a regular ICU for non-COVID patients, pushing them to almost double the normal number of beds. Now, they’re talking about opening another at the hospital’s extension campus and possibly a mobile intensive care unit in the parking lot.

“It unfortunately doesn’t appear as if it’s slowing down,” said Daniel Chastain, clinical assistant professor and pharmacy infectious disease specialist at the UGA College of Pharmacy’s Albany campus. Roughly a month and a half after the first person tested positive, Phoebe reported 1,963 positive test results. That’s about one out of every 50 people in the county. The numbers are likely even higher. Many infected people have mild symptoms, if any, and don’t qualify for testing, meaning they may be spreading the virus unknowingly. “It’s mind-blowing and terrifying when you put it all together.”

For Waldee, every new COVID patient Phoebe admits means figuring out how to make the most of the medications the hospital has. Before the novel coronavirus, maybe one out of three patients in the 12-bed ICU would need ventilators. Now it’s every patient in the four units. And they’re so critical that they require more sedation than your typical pre-COVID ICU patient. So far, Phoebe has managed to snag the drugs needed, but it’s been close a couple of times. “We’re really afraid deep down, at least I am, that we’re going to run out,” Waldee said. “I’m dreaming about sedatives.”

Finding desperately needed drugs is a challenge for most hospitals these days because the supply just isn’t there. Drug manufacturers are scrambling to produce more meds quickly. With every hospital in the country trying to increase their stockpiles, it’s a struggle.

Randy Carver, a UGA pharmacy grad who serves as pharmacy informatics and technology manager of the hospital, works closely with the hospital’s buyer. He tries to ensure there are enough medications to handle the ever-growing patient load. But it’s difficult to keep up when things like fentanyl drips are going at almost 10 times the normal volume.

“When you go to the wholesaler, and you look up the drugs you want and the quantity on hand, it’s just zero, zero, zero,” Carver said. “Sometimes you’re refreshing your screen to see if they checked some in so you can try to order some. We had one drug from the federal stockpile, and part of it got helicoptered to us, and another part was brought to us via state trooper. That buys us time, and hopefully manufacturers will start to catch up.”

A national shortage of protective gear is another hurdle. Phoebe burned through six months’ worth of equipment in a week, a terrifying first sign of what was to come.

Waldee used to go into patient rooms to check monitors, help the nurses and check in with patients. Now she stays in the hall, peeking through windows to get a glance of what’s going on. Even when patients crash, the pharmacists stay with the code cart in the hall, handing off medications to nursing staff as they try to revive the patient.

Currently, no medications have proven effective against the virus. Still, health care professionals and scientists are desperate to find something that might make a difference and save the sickest patients.

“We’ve taken all of this evidence-based medicine that’s been going on for decades, and we’ve thrown it out the window to just try something,” Chastain said. “Is there a rhyme or reason as to why some patients do really well and some don’t?”

So far, he hasn’t been able to detect a pattern. As of April 16, 76 people had died at the hospital, up nine deaths since the day before. More than 1,000 people who were tested and treated have recovered.

But the pharmacists are worried the numbers will keep increasing.

The heaviness of seeing patient after patient get sick and die weighs on Waldee during her 45-minute drive home. She chucks her shoes outside the door, washes her hands as soon as she gets inside, and then showers. She does some yardwork to decompress or watches Netflix with her kids, trying to shut out the outside world and switch back into mom mode. But she worries about accidentally spreading the virus to her father, her kids, random people at the grocery store.

With the constant exposure, that’s always a risk. But Waldee has a job to do.

“You always wonder, ‘Am I going to be able to handle this?’” Waldee said. “Thus far, I think we’ve handled it pretty well. The pharmacy department at our hospital is amazing. There’s a lot of trust and teamwork with our doctors and nurses. They know we’re invested in the patients and the team.”