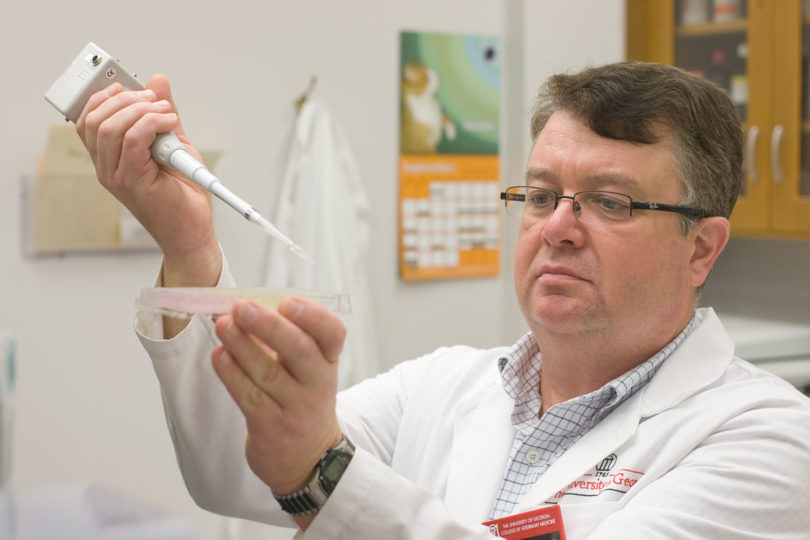 A lab manager in the College of Veterinary Medicine

It all started with a case of parasites.

Bob Storey, a former scientist, engineer and manager in the high-tech industry who kept dairy goats for fun, visited a UGA lab with questions about the parasites harming his herd in fall 2004.

“Bob and I talked for a long time, probably two or three hours, and at the end he said to me, ‘I want to do what you do,’ ” said Sue Howell, a research professional in the College of Veterinary Medicine. “He was curious about everything we were doing, and he was so smart. I couldn’t believe somebody would be that interested in what we do.”

Three years later, Storey got to experience the job first-hand. He was hired as a lab manager in the infectious disease department with Howell.

The career move was a seismic shift for Storey, who graduated from Georgia Tech with both a bachelor’s and a master’s degree in physics, and holds an A.S. in mathematics and an A.A. in photography.

“I took a 75 percent pay cut to come here, but I have no regrets. I love coming to work. Don’t tell Dr. Kaplan, but there are days I’d work for free.”

Storey himself is unassuming. Upon first meeting him, it’s hard to imagine that he fields calls from concerned animal owners across the nation, gives regular talks about the finer points of parasite management to groups around the Southeast and currently is working with the Carter Center’s Disease Eradication Program.

Although Storey works with creatures that feed off the nutrients of their hosts, his personality couldn’t be more different from the parasites he studies, according to colleagues.

“If you need something done, Bob will not only get it done, he’ll get it done right and efficiently,” said Andy Moorhead, an assistant research scientist who works with Storey. “He fixes problems. He’s like Winston Wolf from Pulp Fiction.”

In his current position, Storey oversees day-to-day lab operations, works in the field with large-animal doctors from the veterinary college and helps teach lab courses, just to name a few duties. As he spends more time at UGA, his job keeps evolving, he said.

“I manage personnel, I shepherd grad students, I keep track of the budget, I help teach in the lab, I oversee the care of our six goats that we use for providing eggs for research, I oversee and supervise research projects, I do lab work,” he said.

“In addition to all of that, I am the FAMACHA coordinator for North America. FAMACHA is a program we obtained from Dr. Francois Malan from South Africa. It provides a simple and useful tool for a farmer to tell whether or not his animals need de-worming or not based on the color of their lower eyelid.”

In his free time, Storey rolls up his sleeve and works on his 1990 Volvo 240. He also puts his photography degree to good use snapping nature photos, and, of course, keeps the goats.

“I love to work with animals. I love science. I love medicine,” he said. “This job was just a natural thing. It just evolved this way.”