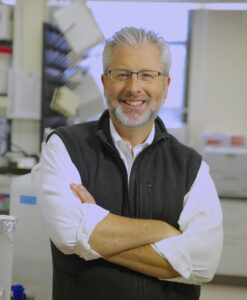 Neil Shubin, Robert R. Bensley Distinguished Service Professor of Organismal Biology and Anatomy at the University of Chicago, will deliver the 2021 George H. Boyd Distinguished Lecture on Feb. 3, 2021, at 4 p.m. His virtual address, “Finding Your Inner Fish: From Expeditions to Enhancers,” will discuss his work in tracing evolutionary transitions from earlier to later species, and what this can teach us about human anatomy.

Shubin’s lecture title is taken from his 2009 book, Your Inner Fish, that tackled human evolutionary history through the lens of Tiktaalik roseae, a species that lived 375 million years ago during the Devonian age. Tiktaalik was technically a fish but had the flattened head of a crocodile and unique fins that shared characteristics with the limbs of later animals. It is considered a prime example of a transitional species that bridged the gap between water-dwelling fish and land-roaming tetrapods.

“Once you look at anatomy and development and molecular biology, you start to see there are billions of years of artifacts and history in our own bodies,” Shubin said. “You see that in our own genomes, in our cells, in our tissues and organs. Whether you look at our skulls, limbs or other parts of our anatomy, you see layer after layer of evolutionary history inside us.”

Shubin was part of the team that first discovered Tiktaalik fossils in 2004 on Ellesmere Island in Arctic Canada, a rugged, forbidding region of the world where cold and polar bears tend to drive away all but the most serious fossil hunters. However—and this is where the “expedition” of his lecture title comes in—Shubin and his team were not on Ellesmere by accident. By triangulating with what he called three classic rules of paleontology, they’d made a strong prediction that the fossils they sought would be right where they found them.

Analyzing these ancient-in-the-extreme species transitions not only illuminates the evolutionary mechanisms behind human anatomy, Shubin said, it also helps to show how many of the traits we associate with later species have their origins far earlier. With new technologies providing humans with more sophisticated tools for studying and applying advances in genetics to the grand challenges of the day, a close study of the past can provide helpful guideposts for the future.

“Evolution is a branching tree—it doesn’t take a straight-on path,” Shubin said. “The path of evolution is often very unpredictable. It has twists and turns and goes backward and forward. It’s not a linear ladder. It’s a hugely branching bush that goes in many different directions.

“It’s a beautiful messiness,” he said. “The mess is the message.”

Shubin’s lecture will be delivered via Zoom, and attendees may register at the following link: https://zoom.us/webinar/register/WN_sJoEBAXkQoC1SmVhyYmP2A.

Shubin’s lecture is part of UGA’s Signature Lecture Series for spring 2021. The Boyd Distinguished Lecture Series, supported by the Office of Research and the William S. and Elizabeth K. Boyd Foundation, brings national leaders and policymakers to UGA in science, education and related fields to discuss applications of research to contemporary issues in education. The lectures are free and open to all.