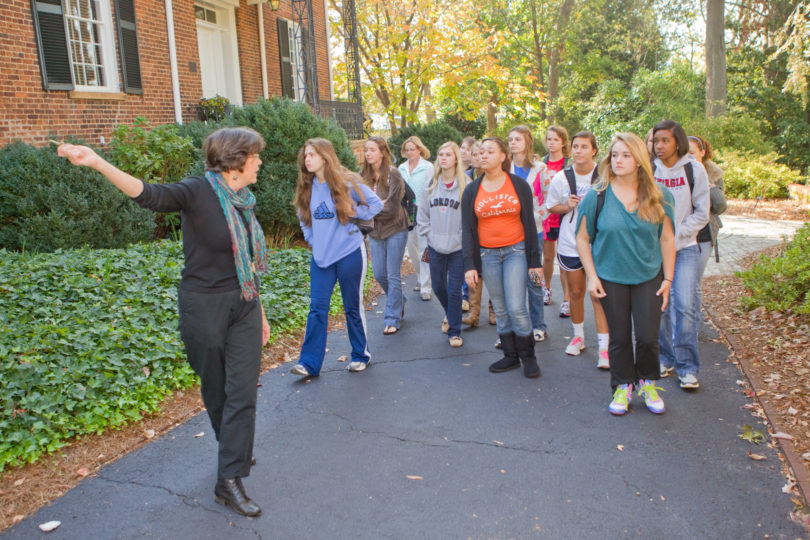 It might have been a day off from work and school for most people, but not for those gathered earlier this month to honor the late Rev. Martin Luther King Jr. at the fifth annual MLK Day of Service, a joint effort between UGA and the Athens community.  That morning, volunteers of all ages braved the chilly weather and gathered at area Athens middle and high schools, as well as Brooklyn and Gospel Pilgrim cemeteries, for landscape projects and general cleanup. That afternoon, lunch, speeches, educational activities and arts and crafts were offered to volunteers at the Lyndon House Arts Center.

Clothilda Barnett, an organizer of the day, surveyed the work scene at the Brooklyn Cemetery.

“Seeing so many people of different nationalities —I look at that and think about what Martin Luther King said about people of all races coming together for a common cause,” said Barnett, who works for the Hancock Community Development Corp. “It’s wonderful. Couldn’t be a better event for a better day.”

Adults and children worked alongside each other.

Retired UGA journalism professor John English and his children had their own reasons for participating at Clarke Middle School’s landscaping projects —Evan, 12, is a member of the Clarke Scholars program, which encourages diverse extracurricular activities and service projects; and Gemma, 9, was there with her Brownie troop. The family chose this over a ski holiday.

“It’s all about community building,” said English. “We do it through action. Talk is important, but you’ve got to actually do something.”

Among the UGA student volunteers were Christopher Johnson, president of UGA’s NAACP, and Henry Adeleye and Brandon Mitchell, both NAACP members.

“A lot of times as students, we make excuses for not going out to the community,” said Johnson.  “Today there’s no excuse….That was a cornerstone of one of the things that (King) preached: don’t forget where you come from, and go out and help in the community.”

“It instills a sense of unity in the community,” added Mitchell.

“It’s important to come out and respect Dr. King’s legacy and give back to the community,” said Adeleye. “He gave so much to us.”