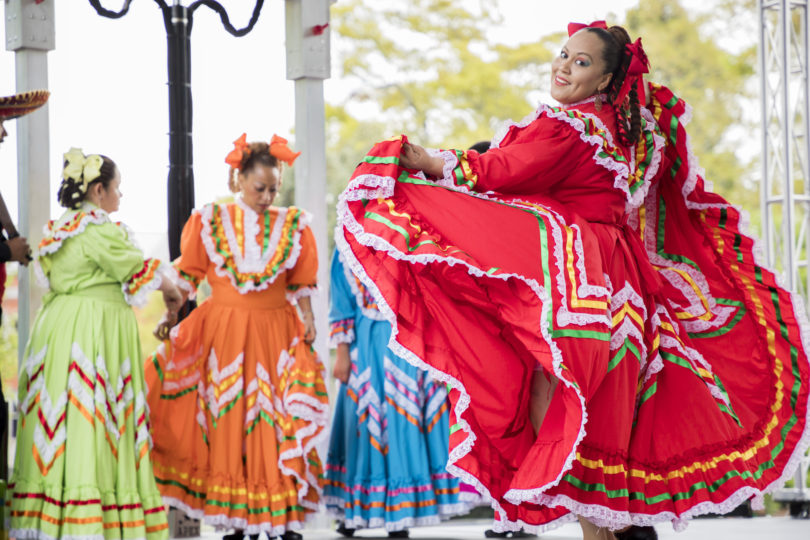 UGA’s International Street Festival was founded on the principle of bringing the world to Athens and Athens to the world. (Photo by Brett Szczepanski).

The International Street Festival will celebrate its 20th anniversary with live cultural performances, food and interactive activities April 6 from noon to 5 p.m. on College Avenue in downtown Athens.

Sponsored by International Student Life, a department within the Division of Student Affairs, the event includes performances, interactive activities and a spot called the Children’s Corner with face painting and crafts.

The founders built the festival on the principle of bringing the world to Athens and Athens to the world, said Leigh Poole, ISL director from 2000-2013 and current International Center director at Winthrop University.

“My former boss, one of the festival’s founders, wanted people dancing in the streets at an educational block party that celebrated the world,” she said. “This is the epitome of what the festival is about.”

The festival’s interactive offerings have allowed attendees to engage with different cultures in a tactile way. Poole recalled a table where visitors could try on traditional clothing and take photos with a ­Polaroid camera.

“We worked with a local company to get a refrigerator box to make a changing station for people to use,” said Poole. “This was before cellphone cameras, and we wanted them to take home a photo of themselves trying on the traditional dress.”

Alumna Allison Giddens began volunteering at the festival in the early 2000s as a student and continues to stay involved with the festival today. One year, the festival grew to where Poole needed to be in multiple places at once and needed someone to ­manage the stage.

“She felt comfortable with me stepping in to manage the performers’ differences in cultural views on time schedules, language barriers and other challenges,” said Giddens. “This is what makes the festival unique.”

Giddens said she comes back now to watch others discover what she did when she became involved in ISL and the festival for the first time as a student.

“I get to relive that moment each year I return to the festival, and my hope for the attendees is for them to take it all in,” she said.

Over the years, additional tables, performers and community partners have been added. The Children’s Corner has really flourished over the past couple of years as well, said Sai Nagula, ISL senior coordinator.

“This year we are very excited as one our local partners, Oconee County Middle School, will be helping us host the Children’s Corner by running our face painting and some crafting ­activities,” said Nagula.

Halla Jibreen, president of the Arab Cultural Association, a recent addition to ISL, looks forward to sharing the beauty of her culture.

“Being born in the United States, visiting Palestine frequently and s­peaking Arabic as a first language makes my culture a huge part of my life, and I want to share it with others,” Jibreen said.

The ACA table also will offer Arab geography games and coloring sheets because many people do not know there are 22 Arab countries or where they are located, Jibreen added.

Poole said she can’t think of a better way to spend a Saturday in April in Athens.

“It is thrilling to see how the students and leadership of ISL continue to raise the profile and overall experience of the festival,” said Poole. “I can’t wait to see what happens during the next 20 years.”