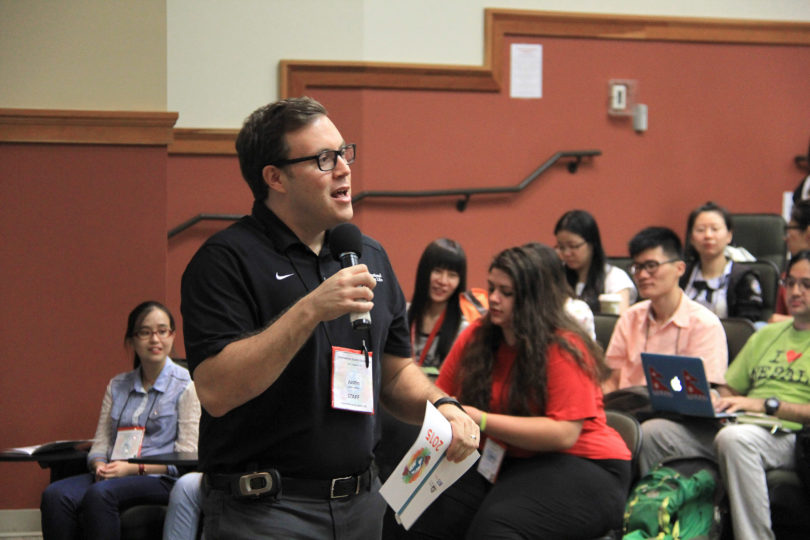 “The overall mission is to ‘internationalize the campus,’ ” said Justin S. Jeffery, director of ISL. “That’s a loaded statement—I get that—but we do a lot.”

Jeffery took over as the director of the department, which is located on the second floor of Memorial Hall and is part of the Division of Student Affairs, last year after serving as assistant student activities director at Georgia Southern University and campus life director at the Qatar Foundation in Doha, Qatar.

That international student support, Jeffery said, begins with orientation and carries through until students get their degrees.

Jeffery knows what it’s like to be a foreigner in another country.

After graduating from Kent State University, he got the opportunity to work overseas in Qatar. There he got to know people from cultures with world views that were different from his own. He discovered that his passion for student service, which he became interested in at Kent State, could have an international component.

“I really fell in love with the opportunity to connect with people who were not only from different backgrounds and cultures but who viewed the world from a different standpoint,” he said.

Now, Jeffery interacts with this kind of diverse group every day, especially in August when ISL hosts International Student Orientation.

This year, 344 students from 45 countries attended the orientation—many of them taking in their first experiences in the U.S.

Orientation for international students is more complicated than it is for other students. These scholars are not only learning the ropes of UGA, they’re also learning how to make a home in a new country-even if only for a few years. Like your typical student orientation, there are social activities and tours of campus, but students also attend sessions on immigration and tax matters, they start to grapple with the differences in academic honesty between the U.S. and their home country, and most are learning how to do this in a non-native language—English.

“Our number one approach is to help them establish a network,” Jeffery said.

At orientation, seasoned UGA students called “world leaders,” who are trained by ISL staff, interact with new international students to answer questions and serve as a foundation to their UGA social network.

While students may not find the transition easy, many international students are optimistic about starting at UGA.

On her first day at orientation, Likhita Kode, a master’s student in computer science from India, said coming to UGA’s campus was “intimidating” but not overwhelming.

“Like all things, it will take some time getting used to it,” she said.

ISL hopes to make that adjustment period quicker and easier.

Amanda Moller, a first-year undergraduate food sciences major from Guatemala, said she doubts she has it any tougher than other first-year students.

“We’re all in the same boat,” she said. “We all left home whether you left (with)in the state or you came from a different country.”

While ISL tries to make international students feel at home in the U.S., it also is trying to help U.S. students better understand the world around them. Jeffery said one of his goals is to “engage and challenge domestic students to broaden their perspectives about what it means to be a global citizen.”

Jeffery estimated that most of his day-to-day interaction is with domestic students. There are 23 student organizations housed within the department, many of which are comprised of American students who identify with these international experiences—either from study abroad or as second-generation immigrants. ISL helps these students organize activities and events around campus.

As International Student Life works to increase its presence on campus, Jeffery said he plans to build relationships with those in departments and units that serve international students.

Moving forward, Jeffery hopes to better help faculty and staff with their interaction with international students.

“At the end of the day, we want our international students to feel comfortable and feel like it’s a worthwhile journey for them,” he said. “And we want to help faculty and staff make it an international experience for domestic students.”