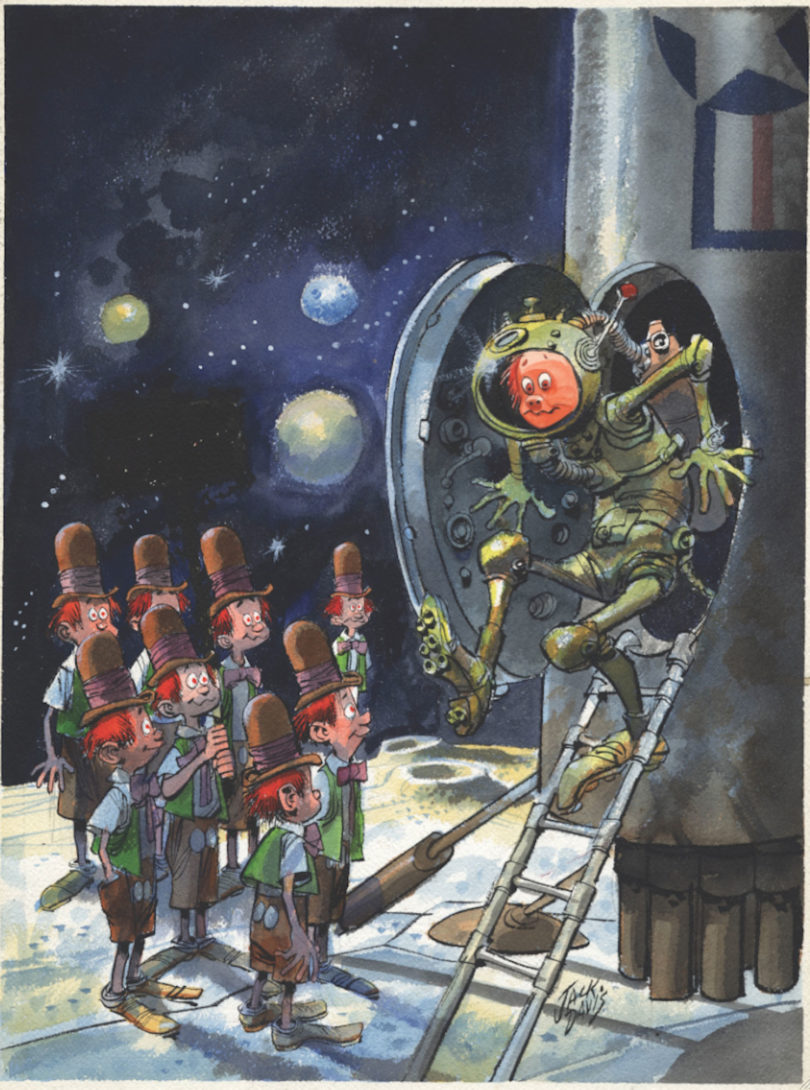 Noted illustrator Jack Davis and Alex Murawski, a professor in the University of Georgia Lamar Dodd School of Art, will sign the recently published book “Jack Davis: Drawing American Popular Culture” at the Georgia Museum of Art Nov. 4 at 1:30 p.m.

Davis’ work is featured in the GMOA exhibition “Beyond the Bulldog: Jack Davis,” which is on view Nov. 3-Jan. 6. The exhibition was organized by guest curator and cartoonist Patrick Dean, who is on the board of the Jack Davis Foundation. The exhibition goes deeper into Davis’ career than the sports and caricature work for which he is best known and focuses on his black-and-white drawings.

Following the book signing, Dean will deliver a public lecture at 3 p.m.in the museum’s M. Smith Griffith Auditorium, with a question and answer period and reception to follow.

Best-known in Georgia for his depictions of Southeastern Conference mascots tussling, Davis (b. 1924) has had a lengthy career in illustration and cartooning, with a recognizable style and an influence that extends beyond his home state. Having published his first cartoon at the age of 12, Davis studied with artist Lamar Dodd in UGA’s art school, which he attended on the G.I. Bill, and honed his skills drawing for the Red & Black and Bullsheet, an Athens humor publication. After graduating, he moved to New York, where he attended the Art Students League before working with William Gaines at EC Comics. Famed for his speed and a tendency to create images with colorful characters, he was one of the founding artists of Mad magazine, supplied covers for Time and TV Guide, and designed album art and movie posters.

Murawski is professor of art and graphic design in the Lamar Dodd School of Art. He serves as president of the Jack Davis Foundation’s board. He contributed to the new book, which was published by Fantagraphics Books this year and is available for sale in the museum’s gift shop. Davis and Murawski will sign up to two items per person.

The W. Newton Morris Charitable Foundation and the Friends of the Georgia Museum of Art will sponsor the Davis exhibition.

Museum Information
Partial support for the exhibitions and programs at the Georgia Museum of Art is provided by the Georgia Council for the Arts through appropriations of the Georgia General Assembly. The council is a partner agency of the National Endowment for the Arts. Individuals, foundations and corporations provide additional museum support through their gifts to the University of Georgia Foundation. The Georgia Museum of Art is located in the Performing and Visual Arts Complex on the university’s East Campus. The address is 90 Carlton Street, Athens, Ga., 30602-6719. For more information, including hours, see www.georgiamuseum.org or call 706/542-GMOA (4662).