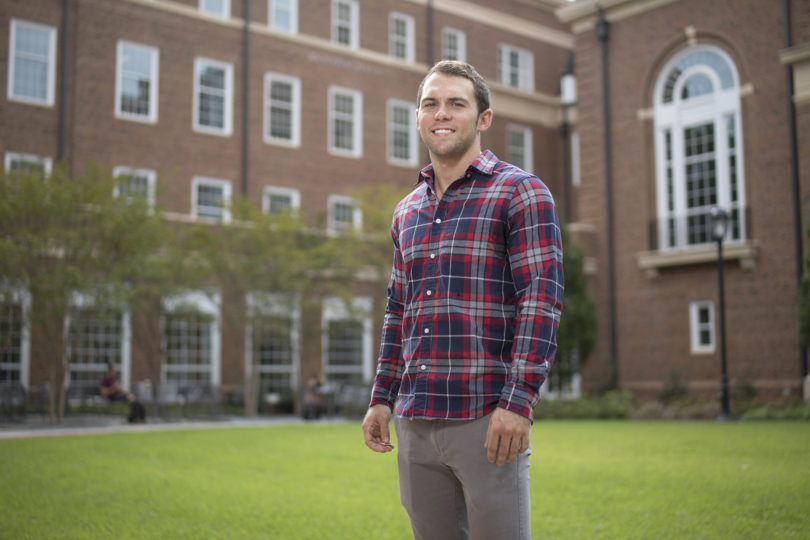 Joshua Anderson helped to liberate Fallujah, but now he’s using the same skills he learned in the Air Force to get a risk management and insurance degree at the University of Georgia. (Photo by Peter Frey/UGA)

For veteran Josh Anderson, it’s all about managing risks.

As part of ground operations for the Air Force, he was in charge of making sure bombs hit exactly what they were intended to, rather than dropping on nearby civilians. Trained as a Joint Terminal Attack Controller, Anderson used cameras and sensors on overhead Air Force planes that showed him a live feed of the landscape below. His job was to pinpoint enemy locations and call in airstrikes.

Now, he’s a risk management and insurance major at the University of Georgia.

Anderson joined the Air Force right out of high school. Less than two weeks after graduating from Salem High School in Conyers with a 3.9 GPA, he was in basic training at Lackland Air Force Base, which is based in San Antonio, Texas. After that, most of his training took place at Fort Campbell, Kentucky, where he was stationed for six years. There, he would train with a 100-pound ruck sack and practice going on combat missions.

It’s the work he’s most proud of.

“We liberated multiple cities while I was there—Ramadi, Fallujah. Before I left, we were halfway through Mosul,” he said. “To be a primary force in pushing ISIS out of these cities and later watching the citizens of those cities safely return to their homes was a proud moment.”

And after liberating the cities, Anderson’s team did ground and air surveillance while the Iraqi army took families that had been forced out of Fallujah—and stayed in refugee camps—back to their homes.

After his deployment, Anderson came to the University of Georgia. He knew he wanted to study risk management and insurance—and UGA has one of the best programs around.

“Risk management and my old job are pretty similar,” he said. “My main job was to make sure the bombs didn’t hit things they weren’t supposed to hit, which is like risk management. Instead of hitting all the buildings, it just hits one building and the civilian family that’s living two houses over doesn’t get destroyed. I have to tell the pilot what kind of bomb to use so the explosion isn’t so big that all the surrounding people get blown up. We were the only ones who were allowed to say “cleared hot,” he said. “Which means “drop the bombs, shoot the guns or destroy the target. So my primary duty was to mitigate the risk associated with the positive effects of close air support.”

He thought veterans services meant help finding a tutor if he needed it or help explaining the GI Bill to him.

“But what this center does is incredible,” he said. “We’re helping people before they need help.”

Before starting classes at UGA, all veterans go through an orientation, one which Anderson helped with this summer. Faculty come to offer calculus tutoring or talk about the services the Health Center provides, like physical therapy. The center is also big on making connections for veterans—helping students like Anderson chat with professors and mentors, or simply talk with other student veterans. The center also assists with accommodations and even job resumes.

University life is an adjustment. “There’s transfer shock,” Anderson said. “Everyone’s GPA drops that first semester. We all pick it back up the next semester, but you’re not used to being in a class with 300 people. Some people come here and don’t realize they have a disability like bad hearing when they can’t hear a professor talk; or they stress out in big crowds and they never thought that it would be a problem.” And that’s what the center is there to help with.

Anderson expects to graduate in 2020. Until then, he’s going to football games and enjoying having more free time.

Life in Athens “is not nearly as stressful,” he said. In the military, “if that bomb hits something it’s not supposed to—that comes back on me.” Now, he has to worry about passing his Risk Management and Insurance 4000 exam.