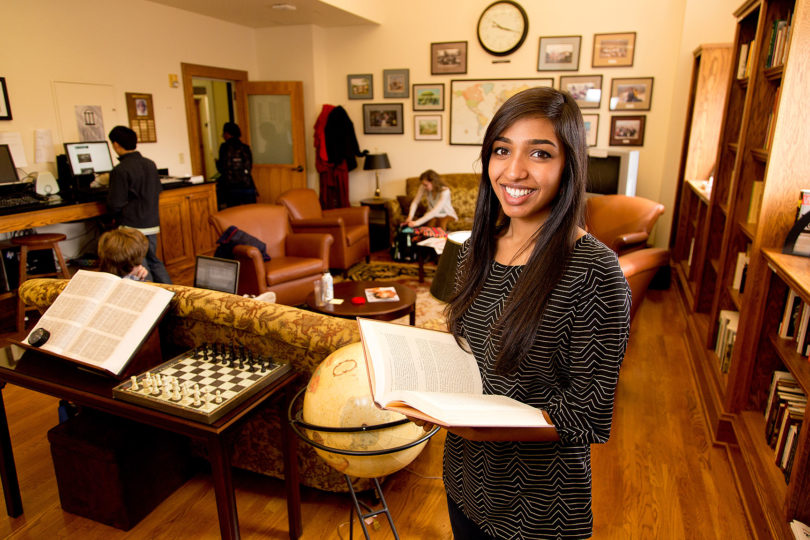 Smitha Ganeshan, an Honors student majoring in anthropology, has received a 2013 Harry S. Truman Scholarship, which recognizes juniors with exceptional leadership potential who are committed to careers in government and elsewhere in public service.

The Foundation Fellow was one of 62 students nationwide to receive the scholarship, which offers up to $30,000 for graduate study. She is the 18th UGA recipient of the scholarship and the only recipient in Georgia this year.

“UGA students have once again proven that they can compete at the highest academic ­levels,” said UGA President Michael F. Adams. “We  all congratulate Smitha Ganeshan on this signal accomplishment and know that she will represent UGA well.”

Ganeshan, who aims to pursue a dual M.D. and master in public policy degree, is active in health care and health policy issues in Athens as well as around the globe.

“Smitha has combined the many opportunities and resources available to students at the University of Georgia with her considerable intellect and energy to address some of society’s most challenging issues,” said Provost Jere Morehead, senior vice president for academic affairs. “She represents the very best of what students from the state’s flagship institution of higher education contribute to our world.”

Ganeshan has been involved with UGA’s Roosevelt Institute, a student-run think tank, since her freshman year and currently directs its health policy center and its environmental policy center.

She volunteers at the Athens Nurses Clinic, has interned at the Athens Health Network and is a co-founder of the Lunchbox Garden Project, an after-school nutrition education and obesity prevention program.

“She is an amazing person, with an incredible intellect and a huge heart,” said David S. Williams, director of UGA’s Honors Program and UGA’s faculty representative for the Truman Scholarship. “These gifts, combined with her impressive abilities as a leader, strongly suggest that she will indeed be a powerful agent for positive change in the future.”