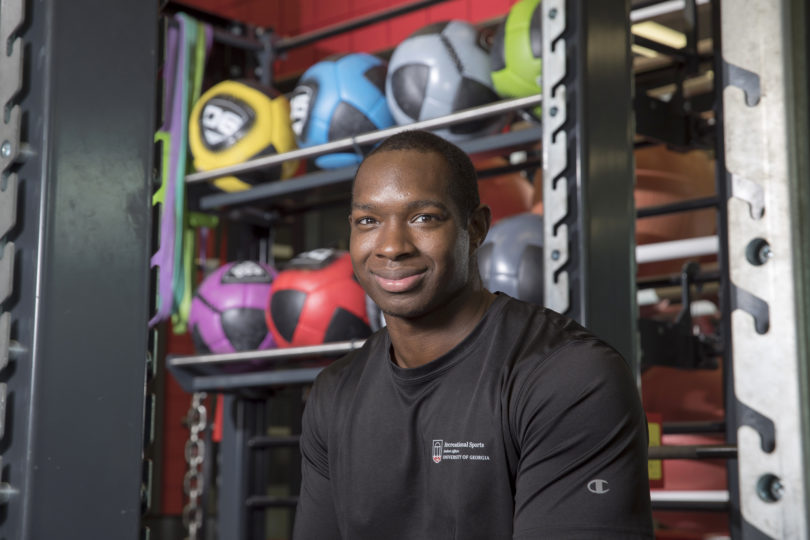 Jvonte Ross is a personal trainer at the Ramsey Student Center. A former sergeant in the Army, Ross is interested in fitness and teaches classes from Mixed Martial Arts to deep water aerobics. (Photo by Peter Frey/UGA)

The first time Jvonte Ross ran past Stegeman Coliseum, he knew the University of Georgia was going to be his home.

Ross had just graduated from Berkmar High School in Gwinnett County. Difficult circumstances had led him to live in an Athens homeless shelter. His single mother was raising three children, money was tight and it was a transitional period for the family. While awaiting basic training at Fort Leonard Wood, Missouri, Ross started running in the mornings to keep in shape for the Army. “After the first time I saw the coliseum, I’d tell myself that one day I was coming back here. I’d do my time, and then I’d come back. And I stuck with that.”

In the Army, Ross was a combat engineer. He described his job as blowing stuff up, setting up obstacles and tearing down obstacles.

For his first three years in the military, he sent as much money as he could back to his single mother and two siblings, who found an apartment shortly after he arrived in basic training.

Ross did a tour in Afghanistan—where he drove armored trucks down the road at 5 mph slowly scanning for explosives. He worked as security, gunner and as a ground soldier on a dog team with dogs sniffing out explosives.

While in Afghanistan, he was also training his roommate and others in his unit— helping them get better scores on their physical fitness tests. He got more interested in fitness, and that’s when he realized he could become a personal trainer and help people. “I spend most of my free time in the gym, so why not work there?”

Specifically, Ross is passionate about keeping people healthy. “There are certain things you have to look out for—your joints. You can be the most muscular person in the world, but if you’re joints aren’t healthy, everything’s going to hurt.”

As a sergeant in the Army, he didn’t want the soldiers in his unit to get injured. So he’d make sure they did dynamic stretches—similar to football style warmups—before going on their 5- to 6-mile runs. “Sometimes you have to drag a body across the ground, sometimes you have to pick up a body over your shoulders and run with it. It can be bad for your bodies. With my guys, they were injured less and enjoyed working out just a little more.”

Ross started an online degree in exercise and sport science, but realized it would take him seven to nine years to earn the degree part time, so he decided to make good on that 2011 promise: He started classes at UGA in January 2018.

College life was an adjustment for him. Used to the rigors of the military and working 4 a.m.- 7 p.m., he felt like he was doing something wrong at UGA.

“I’m used to doing stuff nonstop and now I have a two- to three-hour block between classes. I feel like I need to be doing something,” he said. His mindset was, “If I’m not moving, I’m not getting paid,” and it caused him anxiety and frustration. He tried working out. It didn’t help.

In the military, he had been a sergeant. He didn’t smile. His job was barking at the four to five soldiers that reported to him. Their actions reflected on him. On campus, it was a culture shock.

He had a mean face on all the time. He saw the students and wondered, “Where is their discipline?”

Eventually other veterans, who had been through the same frustration, told him to “knock it down a few levels.” And he realized he needed to calm down.

He got certified in personal training last year while still in the Army and has been a personal trainer at the Ramsey Student Center since February. He teaches deep water fitness at 6:15 a.m. and MMA strength and conditioning at 5 p.m. He also works with clients—from students looking to get stronger to retired faculty aiming to keep mobility.

He does not use his sergeant persona for personal training. “I’m the nice guy now,” he says with a genuine smile.